Once upon a time, there was a little company called ADV Films; based in Texas and founded by a passionate otaku, it slowly became one of, if not the, market leader for anime home media due to their large library and releasing many fan favourites. In 2005, at their peak, they released a series – one that was controversial in Japan – called Elfen Lied; later that year it became ‘one of the most notorious series of the year’ and a massive seller for the company. Despite its enormous popularity, making huge waves in the West outside of the anime fandom, no one licensed the manga. It seemed like a no-brainer, the anime sold extremely well so why not release the original and full story? It seemed that back in the mid-2000s no one wanted to touch the extreme graphic series. That is, until 2019 when Dark Horse comics (who have been releasing delightful omnibus editions for manga such as Berserk and many of CLAMP’s works) picked up the series seventeen years after its debut. So, fans of the original series can now finally see how both materials compare. But was the wait worth it?

Underneath a secret laboratory lies the next stage of human evolution: the Diclonius. They look human aside from having horns on their heads and an unusual power of invisible, telekinetic arms called ‘vectors’ that vary in length and strength between them. One powerful Diclonius is Lucy, who is extremely murderous and angry, being kept in a straight-jacket and behind a very thick lab door. One mistake from a guard is enough however for her to break out whilst murdering half the staff, but not before they get one single shot to the back of her head. Later that day, new university students Yuka and Kouta find a strange girl with pink hair and horns naked on a beach, who can only say the word ‘Nyu’ and decide to take her home. Little do they know that not only are they housing a fugitive, but a ticking time bomb.

This omnibus covers the first three volumes of the manga, which equates to the first five episodes of the anime, and so far, the manga and anime remain pretty faithful to each other, but with a few noticeable differences. First of all, despite having the same story and themes, they open up in very different ways; the anime was infamous back in the day as the first frame of the pilot had a dismembered arm, and the gore did not let up for a long stretch of time. The manga, however, takes a much slower pace to get to the slaughter; instead we’re introduced to the facility, what Diclonius are and tells us how dangerous Lucy is before eventually showing us. It’s not a bad way to start, but the anime definitely has more punch to it. However the manga has a few points over the anime as well; whilst the anime did give a few distinctions between the different diclonius, the manga delves in much deeper, really showing the raw power of Lucy compare to Nana and the fights go on a bit longer, allowing some of the character’s internal thoughts to figuring out how to survive the many life-and-death situations they’re thrust into. What’s interesting, as well, is that the manga also gives a lot more details on the mutation, both on the science side but also hinting origins in Japanese folklore, with ‘oni’ being mentioned. Then there’s the characters themselves; again for the most part they’re identical but a few minor tweaks here and there that build up over time and create a different impression of some of the cast. Lucy, for example, is much more talkative in the manga, complete with evil laughter, which would be cheesy and ridiculous if she wasn’t tearing bodies in half like they’re made of paper. Kouta is also a surprise; he’s known for being incredibly clueless and stiff in the anime, and whilst he’s still the former in the manga, he’s less of the latter as we’re privy to his inner thoughts which are a lot more natural, talkative and sympathetic this time round. It’s safe to say that if you liked the anime but wish there was additional information on the mutation or just more from your favourite characters, you’ll certainly find it here.

Visually, the original 2004 anime was a mixed bag; it certainly had its beautiful moments from the opening credits using Gustav Klimt’s famous paintings, to the backgrounds using gorgeous images of falling sakura petals contrasted with very detailed but sudden and brutal violence. This worked in conjunction with the ‘moe’ character designs used in such a dark story. However, said character designs were often drawn oddly or poorly, with stiff character animations unless they were either fighting, delivering fan service or being brutally murdered. This however is a carryover from the manga which is Lynn Okamoto’s first and you can REALLY tell because the art, especially in the first volume, is poor quality throughout with inconsistent shading, barely there backgrounds, badly drawn characters that often have the same characters looking completely different from panel to panel on the same page, and even one of the series’ draws – the violence – is drawn comically in places. For example: at the end of second-to-last chapter, in one panel a male character is giving a grand speech, and the very next page, his head is suddenly what can only be described as ‘floating’ above his body; there’s no finesse to it, it’s just laughable. However, in the author’s notes at the very end, Lynn Okamoto even calls his work a ‘not-so-attractive manga’ and asks the reader to forgive his ‘less refined’ work, so it’s hard to stay mad at someone who’s clearly inexperienced but passionate about it and wanting to improve.

The translation is provided by Michael Gombos and you can tell he was a fan of the original anime as there are many lines that read very closely to the show; he does a good job at making the conversation flow smoothly and making the shifts from comedy to fanservice to horror at a drop of the hat work as well. There’s a few nice translation notes at the end as well.

It’s common for manga to have a side story, whether it be canon or just comic relief, at the end of the book. Interestingly, at the end of each Elfen Lied book Lynn provides a whole new story instead, as in new tales, new cast, completely unrelated to the main manga which is something I’ve personally never come across before, and the results are positive. There are three stories in total: one about a stoic boy who befriends a tiny female human who only has a week to live, the second is from the point of view of a very experienced bomb sweeper, and the last one is an odd tale of a college boy who ordered a blow-up doll that suddenly comes to life. Despite the odd premises, all of the mini-stories have something to offer. The first one has a cute romance that ends bittersweetly, the bomb sweeper idea is something that isn’t overly seen in manga and considering the detailed way Lynn goes into the profession I wish there was more of it, and the last one has a surprisingly heart-breaking ending that felt earned in its short run time. Oddly enough as well, the art in these three stories is far better than the art within Elfen Lied itself, which shows that not only does Lynn have a wealth of good story ideas in his head but is capable of improving his art style. There’s also a few colour pages at the very start of the book, but it’s mostly wasted on setting up the story (enviromental shots of the lab, etc) and the one coloured picture of Lucy is very small on the page. Hopefully we’ll have better coloured images in the next few books.

The first volume of Elfen Lied isn’t visually appealing but the story starts off on the right foot, and any fan of the original anime shouldn’t pass up on reacquainting themselves with this series. It’s a good, chunky but lightweight book with tons of story content that promises to explore more and beyond where the anime left off.

You can preview the volume right here. 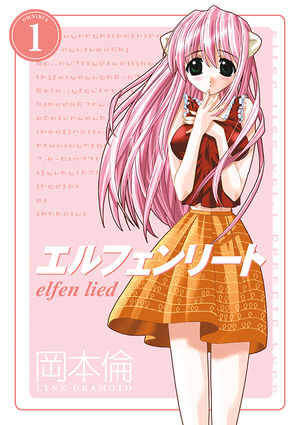 Along with GANTZ, Elfen Lied is touted as one of the most infamous anime series Japan has produced for a good few years. Harking back to the dark days when anime delighted in plentiful bloodshed, Elfen Lied is none the less built around a very contemporary cast of largely clueless teenagers living in an adult … Continued

If the first volume of Elfen Lied was notable for its sheer visceral onslaught of blood shed, volume two will be remembered for how outright disturbing this series can be; rather than treating us to more of the nasty supernatural abilities that define the Diclonius monsters, here we are served up some decidedly human trauma; … Continued