Lucy is an extremely powerful and dangerous Diclonius, and the one that the Chief Director Kakuzawa has big plans for that could shape the future of the entire world and human race. When the ruthless soldier Bando fails to capture Lucy, Kakuzawa decides to send in their second most powerful Diclonius, Mariko, who happens to be Kurama’s daughter. Meanwhile, Lucy and Nyu struggle for control, as more and more girls start to move into the Maple House, and form new lives with Yuka and Kouda, but can the peace remain for long?

So here it is; 18 years after its Japanese debut, and 1 year after the first English volume, we’re now at the very end of the Elfen Lied manga, something that anime fans have been waiting many years for. I’d like to apologise first for saying that the volumes were continuing to be released after the New Year in the Year End 2020 article, I honestly thought we had more to come, but thankfully all of it is now released! If you’re coming in from the anime, the series ends about halfway through Volume 3 of the omnibus, and there’s one flashback in Volume 4 that was animated in the Elfen Lied OVA, however many changes in the plot start to happen from Volume 2, so there’s plenty of new content for older Elfen Lied fans to uncover. 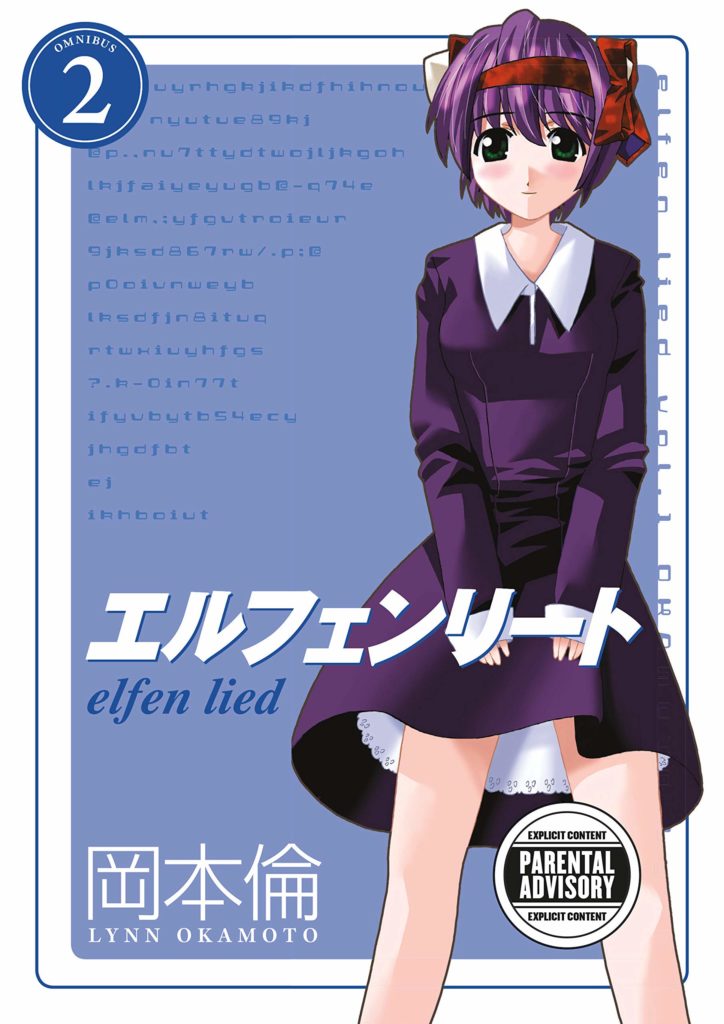 The original anime was 13 episodes long, and created its own ending that tried to have emotional conclusions for the main cast, especially Lucy and Kouda. However it left many story threads unfinished and happens to drop off exactly where the main plot (the overall villain’s grand plan) starts to pick up. As a result, whilst the anime was satisfying in its own way, it also could have done with a second season to finish the loose threads. But the manga doesn’t have that problem; it’s a full and complete story, not just in allowing the author’s vision for the characters to come through, but it also shows the fuller, grander picture of what the world would look like when dealing with a new species. The government is not just a ‘big bad’ separate threat looming over like in the anime, they have their own goals, struggles, drama and conclusion; there’s also a rival company that has its own ways of dealing with the threat, and they all collide with the protagonists who are also dealing with their own dramas.

That’s not to say that the manga story is flawless; there are several chapters where it feels like padding, and because of lot of the villains in the first half (made famous in the anime) are either dead or no longer a threat in the manga’s second half, it has to rely on bringing in fresh blood and most of them are not as memorable. The Unknown Man that comes in at Chapter 72, for example, is like Bando but with all the interesting personality quirks taken out, and replaced with more horrific traits. The Chief Director also suffers from this; his role is largely reduced to overwritten exposition and bloated villain speeches, with Lucy even pointing out how ridiculous he is.

Pacing is also a factor; the manga has a problem where it inserts its important flashbacks in the weirdest of places, making a habit of stopping mid-action to suddenly have several chapters’ worth of a character’s backstory that is relevant but poorly executed. For example, the flashback that reveals Kouda and Lucy’s relationship; in the anime it’s placed when Lucy is ill and being taken care of by Kouda, so thematically it makes sense and there’s nothing major happening in the present day. In the manga, however, Lucy is just standing at the top of the stairs, looking at Kouda and Yuka walking around, and we’re then just dropped into her flashback with no emotional tissue to connect it. It’s more egregious in the fourth volume where Lucy is fighting for her life against a brand-new band of scientists and Diclonius, and one look at Kurama is enough to flash back to their first meeting, dropping the present-day high-tension battle for way too long.

In both the manga and anime, two major themes are explored: abuse, and nature vs. nurture. They run parallel to each other but also collide with many points in the story, with the Maple House being a clear focus point. Obviously, given the context of the story, both themes are explored at their most logical extremes, showing the very darkest aspects of humanity, which will understandably, be too much for some readers. But for what it’s worth, I think the manga explores them better. Most media tend to either show abuse as ‘curable’ by loving the right person, and have a one-sided argument for the nature vs. nurture topic. For the latter Elfen Lied does its best to explore both, and in regards to abuse, it wisely shows that it’s a life-long journey, and whilst being surrounded by people who love and accept you for who you are is a good thing, it’s merely a first step in the life-long process of recovery, not the final destination. The best example is Nana; she’s a Diclonius that has constantly been told that she’s a killer, has no place in this world and is better off dead, directly and indirectly across the story. For the first few times she’s told, she breaks down and runs away. As her life stabilises with Kouda and Yuka, and she is shown that she can find a place in the world, outside forces try to remind her of her nature, and whilst it clearly upsets her, she also does not run away, she fights through it and becomes a better person as a result. Some of the work is undercut however by a few things; the excessive number of panty, bum and boobs shots across the series is really uncomfortable considering the amount of sexual assault and rape threats we get in the series. Also most of the abusers are noticeably male, and bar one minor character, all of the victims are female. Either way, the edginess is hit-and-miss across the board, but if you liked it in the anime, you’ll likely be ok with it here as well. 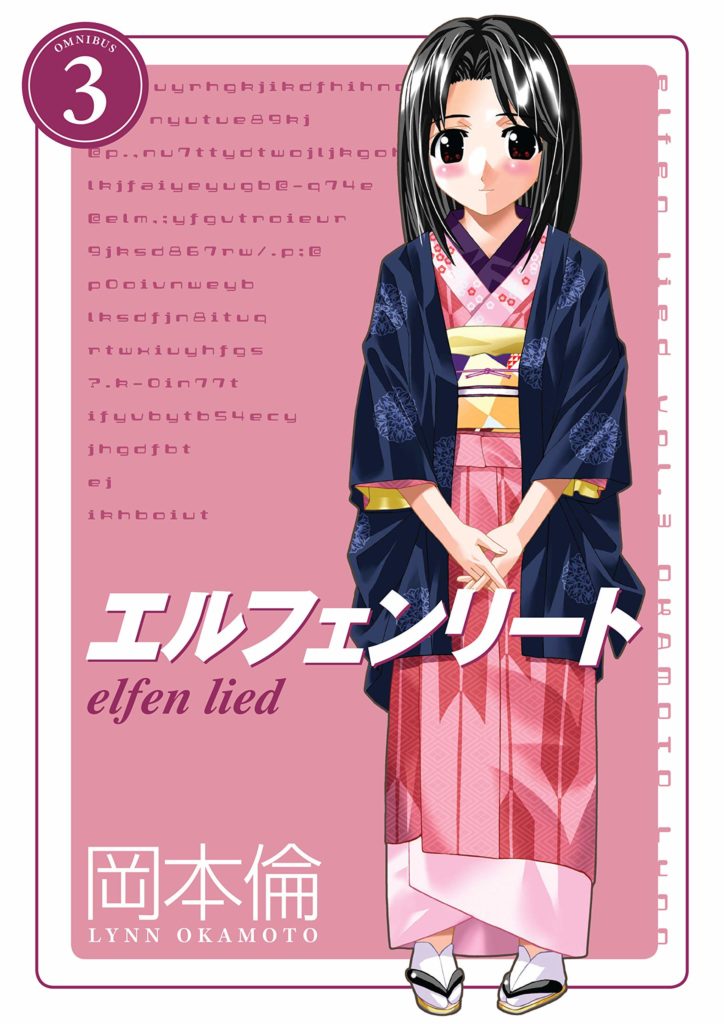 The translator is not provided for the individual volumes, however as Michael Gombos (translator for Volume 1) is credited in the back of the book under ‘special thanks’, and with the style of the translator notes being the same across these books, I’m going to assume it’s the same person. It remains a good translation across the book, and the ‘end of volume’ notes (including notes from the author) are also great, but one flaw to mention is the use of the word ‘retarded’ in the latter half of the story, ideally a better and less offensive word should have been used. Also, in the final chapters, the story-appropriate ‘Elf Song’ that is sung by Lucy is written in very thin and small text; granted it’s in German so I wouldn’t be able to understand it even if it was in bold text, but it’s lost in the chaos of the scene because of its presentation. In regards to the art, it’s still not as visually appealing as the anime, or other manga series within the same genre, but Lynn Okamoto’s talent has considerably increased across the series. In the final chapters where Lucy’s powers become world-destroying, the art really conveys the epic scale of her vectors and you can clearly see the destruction she’s causing.

Elfen Lied is very dark, grim, tasteless and ugly in places, but it’s also an emotional roller-coaster with more depth than expected, and characters that I came to like and empathise with much more than their anime counterparts. If you liked the anime, there are many reasons why picking up the manga is worthwhile. 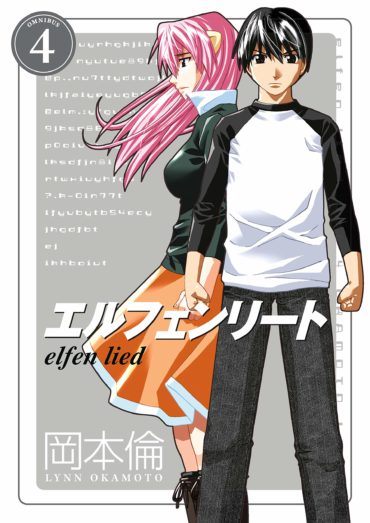