If you’re a creator of any kind, whether that be as a writer, producer, director, or artist, you’re always striving to do your best. Then, when something you have created is critically acclaimed, a financial success and/or just well loved in general, it’s an incredible achievement and personally fulfilling. But it’s also a double-edged sword; you may have produced something miraculous but now you have set a benchmark for yourself, a new gold standard that all your future creations have to live up to and be judged by. It doesn’t matter if the successful work itself was a certain collaborative effort, or a result of lightning striking at the right time, or took years to make, you now must follow it up with something just as wonderful. That kind of pressure can be a lot on the creator, artistically stressful within themselves or just from whoever’s paying them to make it, and sometimes they succeed and create lucrative careers or fail and are forever known for producing just one gem. Makoto Shinkai’s 2016 film Your Name was a colossal success, there’s no other way to describe it; breaking box office records, winning numerous awards and now is spawning a live-action American remake from prestigious Hollywood director J.J. Abrams. But that success has proven to take a toll on the original’s director; with several interviews saying he ‘doesn’t want people to see it’ and how the overwhelming fan reactions have stressed him out. Considering how uplifting and beautiful the film is, it’s sad to see such a negative reaction from its creator, but despite how he feels, a follow-up was made, and like it or not, it will be compared to Your Name by fans and critics alike. So how does Weathering With You hold up against such high expectations that Shinkai fans and he himself didn’t expect to happen just over 3 years ago? 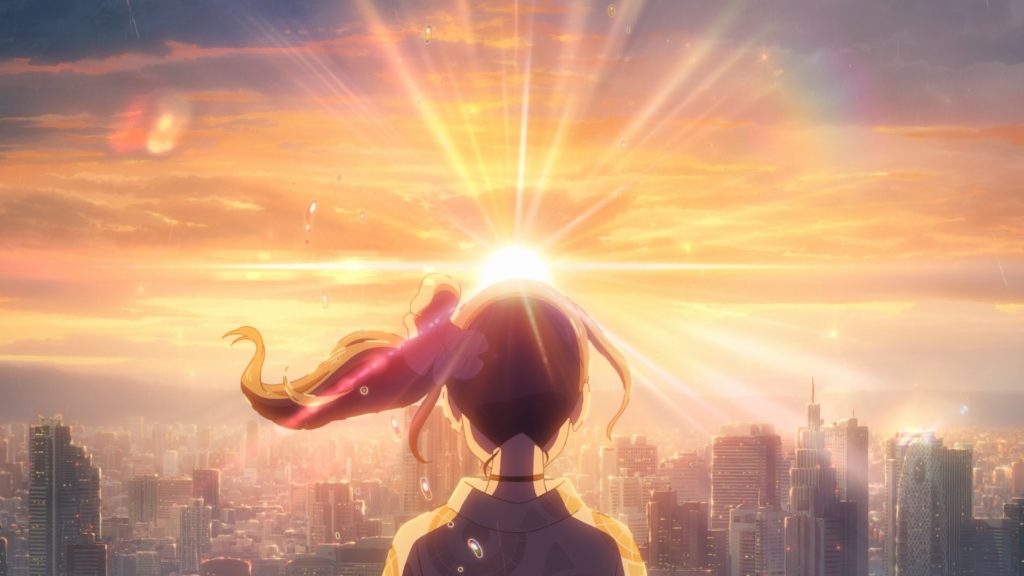 Hodaka Morishima is a 16-year-old who decides to leave home, and go to Tokyo. But with no ID, little money and no home to call his own, he finds it incredibly difficult to survive in the busy, cold city. That is until Keisuke Suga, a writer working on an Occult Magazine, gives Hodaka not only a place to live but also a task, following up on unusual stories about special girls with the power to influence the weather. Hodaka’s chance encounter with Hina Amano, a sunshine girl, not only gives him exactly what he’s looking for but also provides a new way to survive in the city that never seems to stop raining.

Way before Your Name, Makoto Shinkai was fascinated with human relationships, especially young love having the ability to influence the world, and gorgeous weather effects that make real life look like an SD 480p video conversion in comparison. In Weathering With You, both of these traits come to their natural conclusion: a pair of young kids in love that have the power to literally influence the weather. So, fans of everything Makoto Shinkai from the visually stunning Garden of Words to his emotionally charged The Place Promised in Our Early Days, will not only recognise a lot of his trademarks here but also love where his previous endeavours have led up to. Like Your Name, Weathering With You feels like an accumulation of what has gone before, what he’s learnt and he knows what works both for him and the film medium, so without a doubt there’s a lot to enjoy about this picture, whether you felt that Your Name deserved the praise it got or not.

Despite the similarities, there’s something distinctly different about this film in particular that, while it isn’t so left-field if you consider his whole body of work, but definitely makes it stand out from Your Name’s shadow, and that is the film’s unique mixture and attempt to balance uplifting, warming fantasy and cold, harsh reality. In the middle of Your Name (I’ll try to be as vague as possible in case you haven’t seen it) there’s a scene where the plot shifts from a fantasy, comical adventure to an emotional gut punch where you learn that one of the characters is not where you think they are. It’s a powerful moment that really casts a new light on the opening act upon re-watch and makes the stakes on the climax a lot higher. Weathering With You, however, is full of this kind of shift in stakes and the moments where reality hits the audience are not only powerful but can be very sudden. The film starts with an enchanted opening act, with Hina receiving her magical gift, and the swelling of the uplifting music and reveal of the logo right after, promising a new, bright adventure. Seconds later however, we cut to Hodaka nearly dying by drowning due to a storm, and then a montage of him trying to survive on the streets of Tokyo with no help, money or even food to give him comfort as he looks desperately for a job. In short, it’s a contestant to be one of Shinkai’s darkest films; with themes of homelessness, parental abandonment, lethal firearms and human sacrifice peppered into the story as a whole. It’s also his most ambitious in a way, as going back and forth between heart-warming blossoming romance to suddenly having one of the main characters point a gun at someone’s face can be jarring if not timed correctly. For the most part, Makoto Shinkai succeeds in this balance, thanks to the combination of charming protagonists and, arguably, the best developed side characters in his filmography so far (both Natsumi Suga and Nagisa Amano not only get the funniest lines but steal nearly every scene they are in). The only point where it questionably fails is in the ending, which I obviously won’t spoil, but if you are the type of viewer who is able to mentally detach themselves from overthinking logical plot details, then you’ll likely find the ending more uplifting than someone who can’t. 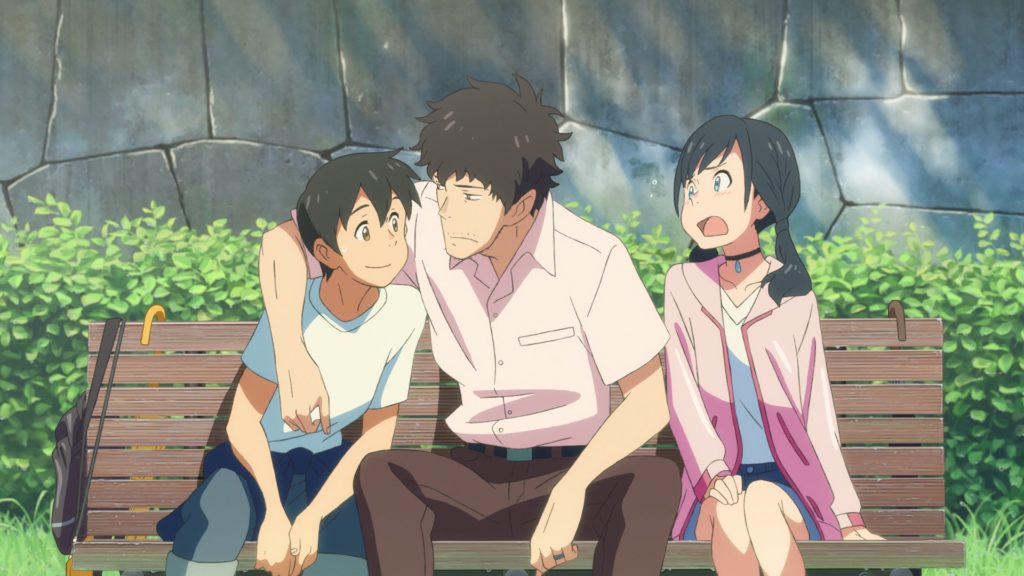 CoMix Wave Films once again provides the animation we’ve come to expect by the visionary director; however, whilst the movie lacks as many visually unforgettable moments like Your Name had; there’s no shrine trippy experience or stunning comet moment to compare to, that’s not to say that the movie isn’t beautiful. Makoto Shinkai’s love for the contrast of stunning rain drops and spectacular blue skies breaks through here and every frame could be printed out and sold as artwork onto themselves.

In an interesting turn of events, Radwimps return to provide the score for Weathering With You, providing their second Makoto Shinkai soundtrack contribution and film score as a whole. The score itself is an interesting, eclectic effort; ranging from emotional pianos, to glitchy effects and even 80s techno that wouldn’t sound out of place in a Stranger Things episode. The songs, however, are a major drawback across the whole film. I will admit that I found the songs in Your Name a hit-and-miss, with the music video-esque opening being a drag and only a few tracks towards the climax working with the moment. In Weathering With You however, not only are there far more songs but they rarely work in the context of the film. Maybe not having the lyrics translated for the subtitled screening made me miss some context, but to give an example; in the major climax of Weathering With You, there are three songs used back-to-back within seconds of each other and only the middle one really had the emotional gut punch that made the moment work, the other two just felt slapped on because Radwimps wanted to fit them into the movie somewhere. I hope for Makoto Shinkai’s next movie, he uses different composers/musicians, as Radwimps come across as a band that just want to promote an album of songs, not create the right music for the scene.

With all that said, you can all let out a collective breath because Weathering With You is a great film; it’s different enough from Your Name to not be a cash-in from its success but also has all the charm, themes and quirks we’ve come to expect from the beloved director that any fan of his work will be pleased to see. Whether this is better than Your Name doesn’t really matter, it’s a great animated film, and with it opening in the UK at the start of 2020, let’s hope it’s a sign of a spectacular year of anime films to come.

Weathering With You will be in UK cinemas courtesy of Anime LTD from Friday 17th January 2020, purchase your tickets here. 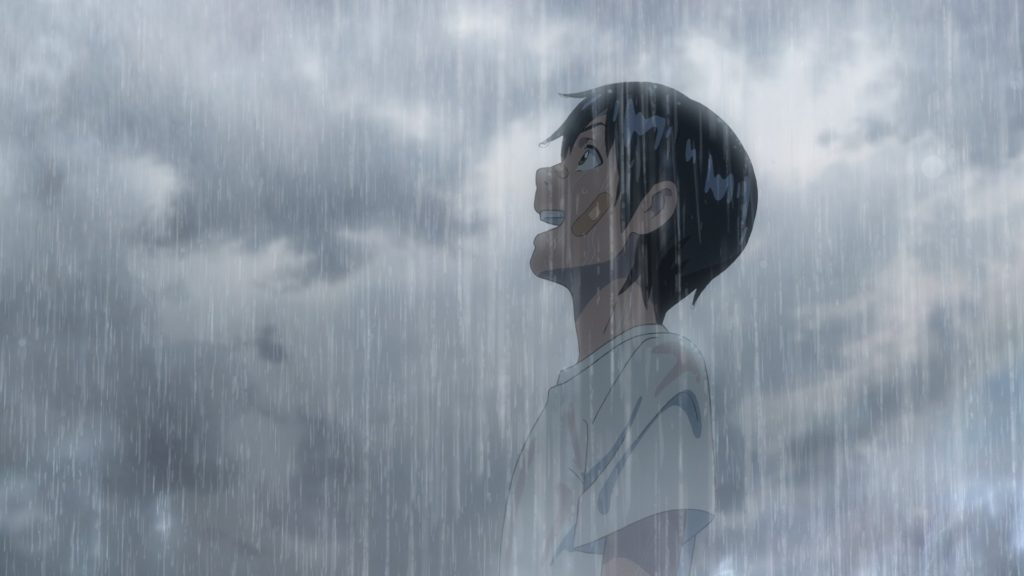 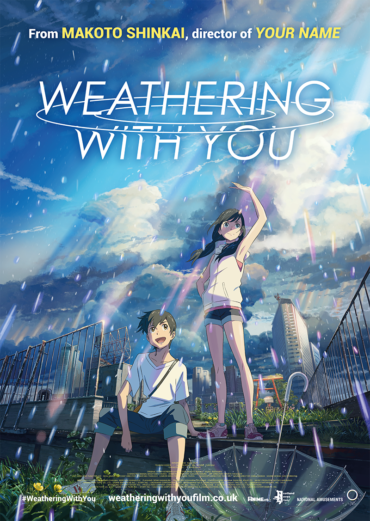 Title
Weathering With Your

Crunchyroll to Release Makoto Shinkai’s Next Anime Film in 2023

Crunchyroll announces that they will release Suzume no Tojimari, the latest anime film from Your Name and Weathering With You director Makoto Shinkai, in cinemas worldwide – including the UK and Ireland, in early 2023!