If you’ve been keeping track of this season’s anime then you might have heard of Toilet-bound Hanako-kun, which is available on FunimationNow. Today I’m here to review the first volume of the manga from Yen Press, to find out if it’s as enjoyable as its anime adaptation has proven to be.

The story follows Nene Yashiro, a fan of the occult who dreams of having a perfect romance. One of the seven mysteries of the Kamome Academy she attends says that a girl called Hanako-san haunts the third-floor girls’ bathroom in the old school building. Should you summon Hanako-san, it’s said that she will grant your wishes. With nothing to lose, Yashiro ventures into the old building to meet Hanako-san…

Yashiro manages to successfully summon Hanako-san, but she’s shocked to discover that Hanako-san is actually a boy! Hanako-kun (as he’s called after his reveal as male) enjoys Yashiro’s reaction and cheerfully informs her that except for his gender, the rumours about him are true. He’ll grant a wish in exchange for something precious.

Hanako-kun asks Yashiro what her wish is, to which she replies that she wants her crush to fall instantly in love with her. Hanako-kun is excited by the prospect of having a wish to grant for the first time in a long time, but instead of using magic to grant her wish, he first offers her a ‘how-to’ help book on love!

While Hanako-kun earnestly wants to grant Yashiro’s wish, he’s also happy just to spend time with someone. As the two grow closer, Yashiro begins spending more and more time with Hanako-kun, leading her to eventually become his assistant. One of Hanako-kun’s jobs as one of the Seven Mysteries is to keep the balance between the spirit world and the human world. Lately, mysterious rumours have been going around, bringing attention to stories of the supernatural beings living at the school. Now the students are in danger from these creatures and Hanako-kun must put a stop to their antics.

Toilet-bound Hanako-kun isn’t all that dissimilar to series like In/Spectre, Natsume’s Book of Friends (although it’s a shojo) and The Morose Mononokean considering its shonen demographic and mostly episodic stories. Of the five chapters included in this first volume, three are self-contained with the final two being a multi-chapter arc leading into the next volume. I’m a fan of these kinds of manga and it’s nice to see another one make it into the English market.

The mangaka behind Toilet-bound Hanako-kun is AidaIro and surprisingly this is their first series to run for more than a volume. Aidalro’s artwork is fantastic, it’s very stylised and gives off the impression of looking at stained glass artwork – a look helped by the beautiful colour page at the beginning of the book.

Aidalro draws their manga with a lot of bold tones with very little shading. The characters are expressive and detailed, which is important as the series often swaps between being comedic and serious. Hanako-kun’s design, in particular, is suitably attractive but also gives off the vibe of being a supernatural being.

The artwork is certainly memorable, but so too are the cast. Yashiro is a likeable girl with determination and bravery befitting of a shonen protagonist, while her cheerful personality works well in contrast to Hanako-kun. For his part, Hanako-kun obviously has a lot of secrets and watching his story unfold in future volumes is sure to be entertaining. Being a supernatural being he’s more likely to cause trouble for the humans without a second thought, but Yashiro does a good job of reining him in.

As previously mentioned Toilet-bound Hanako-kun comes to the West thanks to Yen Press, who has been publishing the series digitally since 2017 (where they’re up to Volume 9) and physically since January 2020. Hopefully, it won’t take too long to catch up to the digital releases! The series has been translated by Alethea Nibley and Athena Nibley. The translation reads well with no issues to speak of. 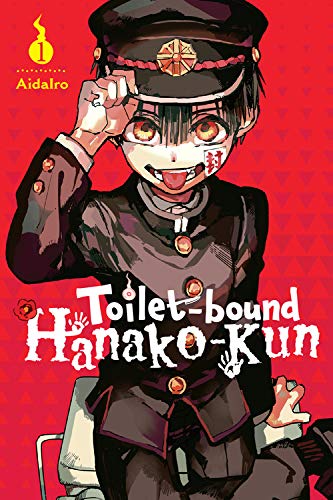 Toilet-bound Hanako-kun first came to life in a three-chapter mini-series, which has been collected in this Volume 0 release. Find out how things differed between this and what became a long-running shonen series.

In this comedic spin-off of Toilet-bound Hanako-kun, the cast spend their days playing games together and enjoying the more everyday elements of life, free from the drama of the main series.