See also our review of Volume 1.

While the first volume of this series showed Freya having to deal with enemies from a foreign land, in the second her main problems come from traitors from her own land.

At the end of the opening volume, Freya, a girl who has been forced to step in and pretend to be the late Prince Edvard of Tyr after he was assassinated, discovers one of her own personal guards, Mikal, being abducted. She thus hides in the caravan to rescue him. While in the caravan, she learns that the abduction is on the orders of Mahrukh, one of her own council who is actually for the neighbouring expansionist Siguardians, and the main plan was to release a Siguardian soldier, Sable, who was responsible for killing Freya’s friend Aaron. Sable soon reveals himself to be on the caravan and wounds Mikal, but then Freya’s other friend Aleksi arrives to sort out all the trouble.

After this fight, they take shelter with another noble sympathetic to the Siguardians, Lars. While there, a body is discovered and a chambermaid called Liesbet, with whom Freya has become friendly, is blamed. Lars plans to cut out Liesbet’s tongue as punishment, but Freya believes she is innocent and challenges Lars to trial by combat. Soon, however, we come to discover that all of this is part of a distraction created by Lars for another treacherous plot.

In this volume it is the storytelling that comes across most strongly. Primarily it is the way that the layers of conspiracy unfold as Freya comes to discover just how far Mahrukh and Lars are willing to go to sell out their country. The price of this becomes dramatically clear at the end of the volume when we witness one of Freya’s closest allies being gravely injured in battle, which makes Volume 3 an even more thrilling prospect. One of the big attractions of this title is that it is hard to see who is going to survive. It is not just the minor characters who are injured or killed, but major characters too, whom you think are going to form a major part of the entire series, can easily vanish in a moment. This particular event gives rise to the question of how Freya is developing in her role as prince. She is seeing some clearly shocking, horrific things. She has already managed to come to the rescue of her friends, and failed to save the lives of others, so the most recent events that will be expanded upon in the next volume will be the biggest test for both Freya and the series as a whole. As a result, while the writing stands out, the art feels rather average. There is nothing really wrong with Keiko Ishihara’s art, it just feels that the manga’s strong-points lie elsewhere.

As well as the action, there are other interesting routes the story takes. When they arrive at Lars’s castle, Freya and her friends are offered a bath. Thus the readers get a bit of fan service as we see Freya bathe, and even more fan service when we see both Aleksi and the White Knight Julius bathing together. This is also the closest at any point that Freya comes to being rumbled, as this is when she first comes into contact with Liesbet. Liesbet first believes (correctly as it happens) that Freya is a girl, but then says Freya can’t be because, much to Freya’s annoyance, she is too flat-chested to be a girl. This does however bring up the issue of exactly how believable Freya is at being the prince. At this point you feel that she is about to be rumbled, but she somehow gets away with it with not that much explanation. Also, out of all the things you could say to demonstrate that you believe someone to be a boy rather than a girl, why bring up the fact they are flat-chested? I can understand the comedy value, but it does seem impolite.

Overall, this edition is a somewhat impressive release, and one that makes the prospect of the next volume a highly anticipated one. However, some of the ways the story deals with the disguise of Freya are starting to seem a bit thin. 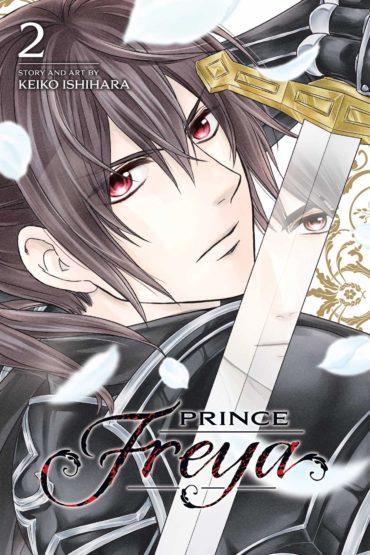