Cast your mind back to the year 2000; before Facebook and Twitter launched into the general public, before YouTube existed, before Wikipedia, and even before the iPod AND iPhone existed, the all-female powerhouse manga team released a little series called Chobits in 2000, and it was their first manga to be targeted towards boys, older teens specifically. It was a huge hit for the manga group, spawning an anime, video games, artbooks and more. It would also become the last series they worked on before CLAMP started the multi-crossover series that is still ongoing to this day: xxxHOLIC and Tsubasa.  With time, the memory of Chobits being a big deal in the early 2000s has faded, as the group has become rather more famous for being unable to finish their projects and creating convoluted stories. But back then, Chobits felt like a breath of fresh air. Despite being a sequel to one of their other series, Angelic Layer, Chobits reads differently to CLAMP’s other work – but does the series still hold up? Or is it as poorly aged as Myspace?

In the future, everyone relies on persocoms: machines that look like cute girls and boys that can do anything their owners wish, from checking emails to accounting. Having a persocom in your life makes things a lot easier, but not everyone can afford one. Enter Hideki Motosuwa, who has been trying to get into university whilst living off his parents, but numerous failures means he is stuck in cram school and working part-time in a bar to make ends meet instead. He could never afford a persocom, but luckily, he doesn’t have to, as he stumbles upon one lying in the trash on his way home. After booting the mysterious persocom in an unconventional manner, he names her Chi and finds out very quickly that his new find is a lot more than just a super cute android.

As mentioned briefly in my intro, technology has progressed a LOT since Chobits’ release, and any series that deals with advanced technology and sci-fi runs the risk of out-dating itself. In Japan, at the time of Chobits’ release, it was much more common to have emails, cameras and mobile gaming on your mobile phone, whereas in the West we didn’t. In fact, in the year 2000, saw the release of one of the most popular mobile phones of all time: the Nokia 3310, with its black-and-white screen, that became famous for its durability, so we were way behind the technological highs that Japan had and the thought of having a computer follow us around was more far-fetched. So, weirdly, Chobits has managed not only to age extremely well but also become more relevant as time has advanced; our phones are now mini computers we take with us, even customise with wallpapers and personal covers, and they all include our personal and professional lives, so having one that looks and acts human is certainly a direction that we could be facing in the future. In fact, having stories with robots gaining sentience whilst exploring relationships with humans has become more and more popular with the likes of Humans, Better Than Us, Westworld and Detroit: Become Human. Chobits wasn’t the first series to explore this concept, but having its themes and technology still relevant today is pretty remarkable.

CLAMP have a varied collection of works under their belt, but so far Chobits remains the only series to be aimed at older male teens, and in turn is also one of the most sexualised of the bunch. From the very beginning, it plays around with a lot of tropes that you would find in series aimed at the same audience: the magical girlfriend who comes into a poor male’s life and becomes the love interest, a mostly female cast surrounding the male lead, lots of fanservice, women seemingly throwing themselves at the lead to help him, and more. At the very start it seems to play these tropes straight, and introduces the large cast of characters at a comedic and fast pace, but as the story unfolds you slowly realise that it’s not completely the case. Hideki almost breaks the fourth wall by mentioning the ‘magical girlfriend’ trope: having a random girl come into a man’s life, falling in love with him and doing all sorts of things for him with her unique gifts, but Chi is a computer with no software installed and at the start can just say one word. She has to learn everything from Hideki and what little money he had before Chi is soon used up on the upkeep she requires, so she doesn’t make his life easier at all. As for him being surrounded by females, invoking harem tropes with even one female suddenly spending the night, it’s clear that the females in his life don’t have their lives revolving around him, if anything he’s just a blip in theirs. Even the woman (his sensei) who stays over for a night, spends the whole time drinking, putting Hideki out, and seems to be hiding a secret. So, whilst it’s played for comedy, it’s clear that her staying over is her running away from her own issues which have nothing to do with Hideki, rather than playing into Hideki’s world and sexual fantasies.

This does make the hyper-sexualised (for CLAMP) elements of the story deeper than expected, but that doesn’t mean that fanservice isn’t still being used here, and sometimes the elements even contradict what CLAMP goes for. CLAMP’s work often has a recurring theme of ‘fate’ and ‘soulmates’ and it’s clear from early on that the same will play into this title. I have read all of this series, and won’t spoil what comes next in case you haven’t, but I won’t deny that the heavy theme of sexualisation and objectification of women (or in this case, female-presented machines) is an interesting angle to go for, but such a heavy subject ends up making the whimsical notions of CLAMP’s romance not gel very well. If you’re a long-term fan of CLAMP you will know what to expect and switch off your brain to allow the romance wash over you, but if you’re not as familiar with their work, it can be jarring. But is it better to try and strive for something different from the norm, even if it doesn’t quite strike gold? Or keep to what you know and not risk anything in return? That’s a question many creators have, and whilst it will vary from person to person, I personally do love how CLAMP tried to do something different here, and it’s a reason I still own my Tokyopop copies to this day.

Speaking of older versions, Chobits has been re-released before, 10 years ago by Dark Horse as two omnibus editions which are now out of print, as well as the original Tokyopop editions released 10 years earlier, meaning that this new hardback edition is the only version of Chobits you can purchase. So how does it hold up? First it should be noted that this new hardback contains the first two volumes of Chobits, whereas the omnibus from 10 years ago held more and only came out in two books, so these hardbacks have more volumes to come to cover the original eight volumes. The Dark Horse edition came with a new translation and colour pages; I cannot say for sure how the coloured pages hold up against the new ones we get in this book, but the translation has changed again for this edition. Comparing the Tokyopop to Dark Horse (brief glimpses here) and this new one is quite interesting; Shirley Kubo provides the latest translation and it’s fascinating how different it is. Tokyopop’s and Dark Horse’s translation seems very wordy, often over-explaining things, whilst Kodansha’s translation keeps things simple and to the point. Also, not only did the original Tokyopop remove references to Doraemon (part of a running gag in the first few chapters) which the new edition keeps intact, but interestingly keeps a ‘soapland’ ad culturally correct. For context: in Japan, to get around the anti-prostitution laws, ads for seemingly innocent things such as soap and women washing clients, are actually a front for sex work. In the original Tokyopop translation, they completely either missed this or didn’t want to explain the context so translated it into a fully, non-questionable, prostitute advertisement.

CLAMP is known for their gorgeous and detailed art, but as Chobits is a series that contains no fantasy elements, you’d think that the art wouldn’t be as visually striking, but that’s not the case. The characters are beautifully and uniquely designed, with many of the persocoms subtly referencing characters from other series. The art itself is also very clean, with each panel clear and understated, making the moments where Chi performs inhuman feats all the more mesmerising.

This new release of Chobits is not only a beautifully put-together book, with a new, more faithful translation, but is also a wonderful celebration of one of CLAMP’s most interesting and provocative, if flawed, works. If you haven’t upgraded your Tokyopop editions, missed out on completing your Dark Horse collections or just never got into this series, there’s never been a better time. 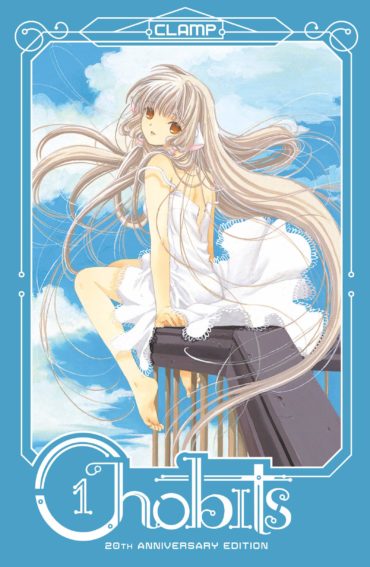 CLAMP’s Chobits continues to march forward with relatable characters and multi-layered themes that stay with you after the last page has been read.