In the future, everyone relies on persocoms: machines that look like cute girls and boys that can do anything their owners wish, from checking emails to accounting. But Hideki’s persocom is something far more extraordinary; he manages to find and bring Chi home after she mysteriously roams the city and somehow affects the other persocoms. But he has so many questions, many more than he had before, not just about Chi herself but also his feelings towards her and persocoms in general. And with a series of books somehow portraying his relationship with Chi, can Hideki work through his feelings in time to figure out Chi’s true identity?

The second collector’s edition of Chobits includes Volumes 3 & 4 of the original run of the series, and this is the part of the story where the series’ themes and drama really begin to kick in. The first two books settled the audience into the new story, with cute characters and planted the seeds for the bigger questions, but here is when things start to get heavy. The drama and questions the series brings up start here in the form of our side characters; two of the main ones deliver their back stories, and they are some of the saddest that CLAMP have ever put to paper (and that’s saying something!) First, we have Takako Shimizu, whose new husband has become obsessed with his persocom, and the heart-breaking part is when it’s revealed that her husband has locked the door from the inside, preventing her from returning home. And then we have the cake shop owner, Hiroyasu Ueda, who famously married his old persocom. Although the stories on the surface seem quite outlandish and not relatable, it’s the emotions they invoke that make the world of Chobits feel much more complex. Shimizu’s lack of self-worth, knowing her husband would rather spend all his time with his computer, is reminiscent of someone living with a partner with a porn addiction. Whereas Hiroyasu’s battle with trying to maintain a relationship with someone whose memory is fading every day, is an emotion anyone living with a person  suffering from dementia can relate to. It’s the stories grounded in these emotions that really work, not completely in favour of persocoms, or against them. Persocoms are not inherently good or bad, like everything in life it depends on how you use them, they’re shades of grey. Like computers in real life, they can be great for communications, sharing files and finding new things to enjoy, but can also cause a lot of harm with cyber-bullying, hacking and more.

The children’s books that Chi collects across the series also becomes less subtext and more like text, as Hideki realises that the stories seems to be referring to his and Chi’s relationship. It also makes clear where the authors divide the line as well, why one type of relationship with a persocom is healthy and why another isn’t. With Shimizu’s husband, and many others, they choose to replace the real world with just their persocoms, whereas Ueda, child genius Minoru (and, perhaps, Hideki) choose to show their persocoms the world and help them forge their own identity. Although the delivery of such themes isn’t always flawless; for example it would have been stronger if Shimizu delivered her own backstory, rather than have it go through her lover Shimbo, and it’s hard to truly wrap your head around the fact that all persocoms are, always, possessions of the humans, but it’s depth that’s welcomed, nevertheless.

Translation of this volume of Chobits is provided by Kevin Steinbach, who only delivered the additional translation in the first collected edition. It’s interesting that it’s changed mid-run and you can tell the difference; instead of saving translation notes for the end of the volume, he adds them at the end of each book, so you’ll get a few pages’ worth after Volume 3 and more at the end of Volume 4, which I personally prefer as it means the information is more fresh in my mind. Also, compared to the original Tokyopop editions there are a lot of changes; this version is more conversational, less wordy and in the case of Ueda’s flashback, where the Tokyopop edition kept ‘konnichiwa’ untranslated, this new version does. The book’s hardback cover continues to be beautiful and comes with exclusive colour pages as well.

CLAMP’s Chobits continues to march forward with relatable characters and multi-layered themes that stay with you after the last page has been read. This new collector’s edition is a fantastic addition to any bookshelf, and a perfect gift for any CLAMP fan. 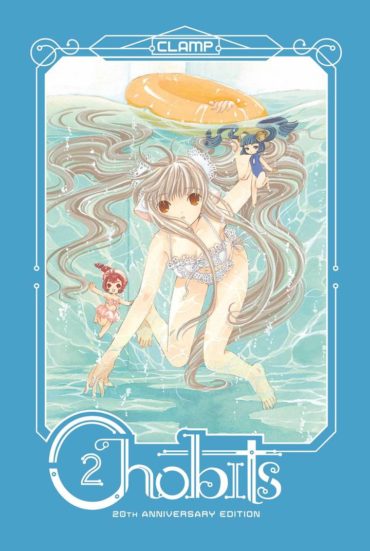