Soul Eater is a series by mangaka Atsushi Ohkubo (Fire Force) which was published in Monthly Shōnen Gangan between 12th May 2003 and 12th August 2013. It was also adapted into an anime series which aired from 7th April 2008 to 30th March 2009 over 51 episodes, complete with an anime-only ending (which wasn’t all that good.)

The story of Soul Eater revolves around three teams, each of which consists of a weapon user or “meister” and at least one “demon weapon”, a human capable of transforming into a weapon. These teenagers attend an eccentric school dubbed the Death Weapon Meister Academy (DWMA for short) which is ran by the equally eccentric headmaster, Lord Death himself.

Throughout the series, we follow their journey as they work to defend the world from evil supernatural forces, whilst attempting to craft a special weapon called a Death Scythe, a weapon fit for Death. This can only be achieved by hunting down 99 evil human souls and one witch soul.

This first volume contains the three standalone chapters which started life as one-shot chapters before their popularity kickstarted the Soul Eater franchise. These serve to introduce the three core teams of Maka Albarn and Soul Evans, Black☆Star and Tsubaki Nakatsukasa and Death the Kid and his Twin Weapons Liz and Patty Thompson

The first one-shot chapter, “Soul Eater”, sees lead protagonists Maka and her Weapon Soul attempting to hunt down a seductive witch called Blair so that they can get one step further to crafting a Death Scythe.

The second one-shot chapter, “Black☆Star”, sees supporting leads Black☆Star and his Weapon Tsubaki taking down a fictionalised depiction of Al Capone, The King of the Underworld, and also duels the Mighty Guard Mifune, who proves to be a worthy opponent.

The third and final one-shot chapter “Death the Kid” centres around Death the Kid and his Twin Weapons Liz and Patty. It ends up being an often comedic romp as they venture out to Egypt to visit the pyramids in an attempt to cease the activity of a necromancer witch who is turning wandering souls into mummies.

Each of these chapters introduces not just the characters but their distinct personalities and dynamics as well. Maka and Soul are close to each other but both have their faults and hang-ups, like Maka’s strained relationship with her pervy Dad, Spirit, as well as their desire to turn Soul into a Death Scythe.

Black☆Star, meanwhile, is brash and arrogant, with an aura of self-congratulation that results in him often rushing into dangerous situations and being unsubtle at almost every turn. His partner, Tsubaki, is in contrast calm and collected, balancing out some of Black☆Star’s impatient tendencies.

Death the Kid is a bizarre individual whose main quirk, aside from being the son of Lord Death, has severe OCD which requires perfect symmetry in all situations, whether that be his Twin Weapons, dual pistols, his hair or even the breasts of said Weapons (expect this sort of humour from the series). His partners are sisters with quite different attitudes – Patty is very child-like, whilst Liz is more moody and cool-headed.

Each of these teams presents enough variety and fun to get the reader hooked pretty quickly, and as mentioned before, it was the popularity of these one-shots that helped the series get off the ground.

The remaining chapters see the teams interacting and fighting each other and also the patchwork Dr. Franken Stein as they also discover that their former teacher and former meister Sid Barrett has been transformed into a zombie. As Death the Kid and Liz and Patty arrive at the DWMA they end up fighting Maka and Soul plus Black☆Star Tsubaki in a battle with an amusing conclusion.

Viewers of the anime will likely be familiar with the contents of this volume due to their adaptation in the early episodes, though there are a number of changes between the anime and manga which are listed in detail on the Soul Eater Wiki pages for each chapter.

Whilst reading this first omnibus volume it was fascinating to see how Ohkubo’s art and character designs have changed since these early chapters but also how their charm and distinct aesthetic were established this early on.

The translation for Soul Eater: The Perfect Edition Volume 1 was handled but Amy Forsyth whilst the lettering was handled by Abigail Blackman. I found both to be of a good standard and didn’t have any issues working through the volume.

Overall, Soul Eater: The Perfect Edition Volume 1 serves as both a very good introduction to the story and provides a nice incentive for fans to revisit where the story of Soul Eater began. 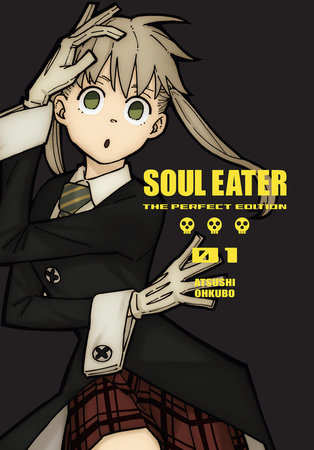 Back in 2009, Studio BONES produced an anime adaptation of Atsushi Ohkubo’s shonen manga Soul Eater and recently, it was revealed that they are once again collaborating with Square Enix to adapt the franchise; this time focusing on the Soul Eater Not! spin-off manga, which will start airing on 8th April. With just less than … Continued

Soul Eater is a shonen classic: an exciting action show with a sheer sense of style that covers its entire look and feel, from world to soundtrack to characters. Despite its plot having an anime original ending, it’s still thrilling to watch and manages to ties things up in a satisfying way.

The Great Jahy Will Not Be Defeated Volume 2 Review

Volume 2 of The Great Jahy Will Not Be Defeated introduces us to Saurva, a girl who wants to take Jahy’s place as the Number Two ruler of the Dark Realm. If that wasn’t enough Jahy must contend with Druj discovering her place of work and fooling her into believing that she owns the place!

Anime and manga have plenty of diversity in terms of genre and setting, whether it be futuristic mecha, fantasy-like magical girls, romantic harems and boys’ love tales, stories set in the past or the future, from the workplace to outer space. However, there are some settings they  keep coming back to. Obviously schools are universally … Continued