In the first volume of Suppose a Kid From the Last Dungeon Boonies Moved to a Starter Town, protagonist Lloyd came to the big city to become a soldier. Now as we reunite in Volume 2, we find out the results of the exam he took and if he had what it takes to fulfil his dream.

Unfortunately for our hero, it turns out that he has failed the exam but, not ready to go home to Kunlun just yet, he decides to hunt for a part-time job. It’s not long before Lloyd stumbles upon a part-time job advertisement for the Military Academy’s mass hall.

Although his interviewer turns out to be the frightening former royal guard Chrome Molybdenum, our hero still lands himself the job and begins learning more about city life while earning his keep. Lloyd is certainly capable when it comes to cooking and cleaning, but it turns out the real reason Chrome took him on is to keep a watchful eye on him. Someone with as much power as Lloyd can’t be allowed to just roam free!

Elsewhere in this volume, the plot thickens as Marie grows closer to taking down the imposter who has taken control of her father, the king. Marie loves Lloyd like a son and tries to keep him away from the impending danger she faces, but our kind-hearted hero isn’t likely to simply turn a blind eye to a girl in need…

Just like the first volume of Dungeon Boonies, this instalment is filled with action, comedy and lovable characters. Lloyd still sees himself as a nobody who doesn’t even have the strength to defend those he loves, but the friends he’s made in the city are quickly coming to understand how delusional he is. This boy doesn’t need protection, but he does need nurturing into the hero he’s sure to become some day.

One of my favourite things about this series is seeing how everyone reacts to each another. There are characters from completely different walks of life coming together because of Lloyd’s influence and that gives us some great scenes.

One prime example is when Selen the Belt Princess (who is saved from a curse in Volume 1), meets Marie and mistakenly thinks she’s in a romantic relationship with Lloyd! Selen, being in love with him herself, misunderstands everything Marie says and quickly deems her a rival.

For her part, Marie is thoroughly exasperated already, having enough problems with Alka, the village chief of Kunlun. Alka is overly protective of Lloyd and although she has a village to run, she uses a special orb to teleport to Marie’s house whenever she feels like it. These visits are always accompanied by trouble as Alka tries to help out Lloyd and somehow manages to make things even worse than they were, to begin with!

In my first review, I talked about how I was eager to see how the series would handle fight scenes. I’m happy to report that mangaka Hajime Fusemachi manages to convey the excitement (and ridiculousness) of the battles extremely well. Although Fusemachi’s tendency to cram everything into fairly small panels persists, this doesn’t take away from the impact these sections have on the reader.

As I said last time around, the series flows well in manga form despite being an adaption of a light novel. I love the artwork and how Fusemachi draws the cast, bringing them to life in a variety of ways. This might even be one of my favourite light novel adaptations this year, so I’m certainly eager to see where it goes next and what trouble Lloyd finds himself in next!

Suppose a Kid From the Last Dungeon Boonies Moved to a Starter Town Volume 2 comes to the West thanks to Square Enix Manga and continues to be translated by Andrew Cunningham. The translation reads well with no issues to note. Like the previous instalment, this book also includes a colour page at the beginning. Volume 3 of the series is currently scheduled for release in December.

Overall, the second volume of Suppose a Kid From the Last Dungeon Boonies Moved to a Starter Town proves to be another entertaining read. If you enjoyed the first volume you’ll certainly get on with this one. As far as manga adaptations of light novels go, this is one of the best. 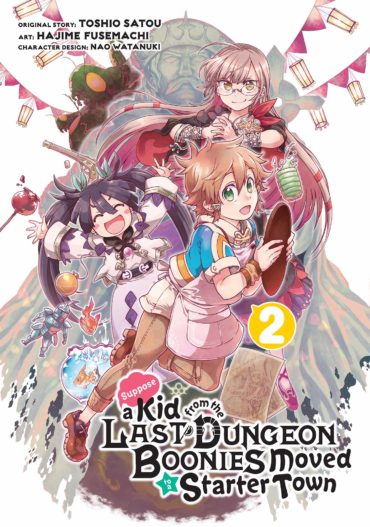