Now that we’re into the Winter 2021 anime season, Suppose a Kid From the Last Dungeon Boonies Moved to a Starter Town is on our screens, ready to show off the antics of Lloyd and his friends in a whole new way. But if you can’t get enough of the series, then Square Enix Manga are here to provide the third volume of the manga adaptation.

In the last volume of the series, Lloyd saved the kingdom from ruin and Marie from certain death, but now things are back to normal and our hero is preparing to attend the Military Academy. Before that though, Marie needs our hero’s help pulling a legendary sword from a stone in a remote village…

Nandin is known as the village of the holy sword and because of this, it has become a tourist trap. Visitors are challenged to try pulling the sacred stone from the boulder it’s stuck in and are then encouraged to buy merchandise exclusive to Nandin! Not only that, but the town’s chief refuses to cooperate with the kingdom to allow them to build a cross-country railroad through the nearby forest, so now it’s up to Marie and Lloyd to turn the tables.

Afterwards, Lloyd begins his days at the Military Academy, which is preparing for a sorcery tournament. The tournament has brought mages from far and wide to compete against the kingdom’s best and Lloyd is excited for the trials that await him.

For the tournament, Lloyd teams up with Selen the Belt Princess and their friend, Riho the One-Armed Mercenary. As it turns out, Riho’s mentor is also taking part in the contest and her arrival brings with it plenty of drama for our young trio as Riho’s past is finally revealed!

One of the nice things about Suppose a Kid From the Last Dungeon Boonies Moved to a Starter Town is that it keeps the issues the casts face fairly separate. While they intercross at times, more often than not Lloyd and his friends are going about their lives oblivious to the troubles Marie and the instructors are facing.

This works out well for the series since it lends itself to plenty of comedy for the readers as we watch the carefree kids and the more serious storylines the others are dealing with. Of course, when the two meet in the middle, like at the end of Volume 2, it results in some fantastic moments. It seems like Volume 3 is setting up for a similar thing with the legendary sword which I’m sure will be making a return in the future.

Of course one of the most important things this instalment does is develop Riho. She’s a mysterious mercenary who became friends with Selen and now tries to keep her under control when it comes to her feelings for Lloyd. Although she seemed like one of the good guys, it was always clear she had a checkered past and seeing that come back to haunt her is satisfying.

As always, mangaka Hajime Fusemachi manages to pack a lot into the series, both in terms of the artwork and the storytelling. The art is still very detailed with plenty to see and the action scenes are delightful, but what I like most is how Fusemachi moves the story along at a decent rate. We’re never stuck on any tale for long before we’re launching into the next, but it’s just long enough to stay memorable.

Suppose a Kid From the Last Dungeon Boonies Moved to a Starter Town Volume 3 comes to the West thanks to Square Enix Manga and continues to be translated by Andrew Cunningham. The translation reads well with no issues to note. As always, this release includes a colour page at the beginning. Volume 4 of the series is currently scheduled for release in March.

As previously mentioned, the anime adaption of the series (by studio Liden Films) is currently airing and is available to stream on Funimation. If you’re a fan of the manga, then you’ll definitely enjoy the anime, so I wholeheartedly suggest checking it out.

Overall, Suppose a Kid From the Last Dungeon Boonies Moved to a Starter Town continues to offer a fun adventure story as it doubles down on the style of storytelling that makes it so entertaining. This volume includes plenty of character growth and the weird and wonderful situations Lloyd often finds himself embroiled in! 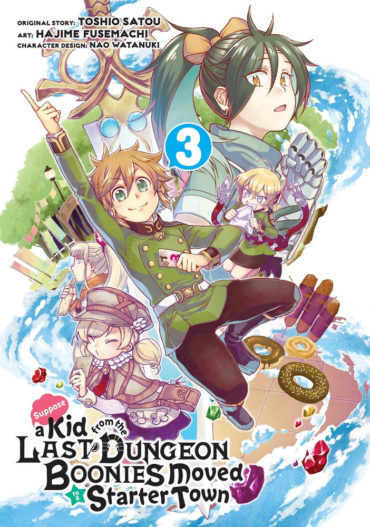