After having had almost a year’s break, Suppose a Kid From the Last Dungeon Boonies Moved to a Starter Town finally returns to the English market with the release of Volume 6.

When we left Lloyd at the end of Volume 5, he was working as a bellboy in the luxury hotel Reiyokaku. While our protagonist is working hard to prove himself a capable employee, his senior coworker Kikyo has been investigating strange cases of people falling into comas which may be related to a guest staying at the hotel.

It turns out that the person responsible for all this trouble is the Demon Lord Erlking, who Lloyd mistakes for an ordinary monster! While Kikyo and his friends are flabbergasted by Lloyd’s inability to sense the danger they’re facing, they soon realise that they must band together to take down Erlking before it can destroy the hotel and go on to cause chaos and destruction across the land.

Facing off against Erlking also works in Selen’s favour since she’s hoping to prove to her father that Lloyd could be a worthwhile partner for her, instead of the noble he was trying to set her up with in Volume 5. Although there’s hardly time for that amid this life-and-death battle!

Having had such a long break between releases does somewhat take away from the momentum here in what proves to be the end of the hotel arc. It’s less story-driven and more centred around the fight against the Demon Lord, so although there are plenty of impressive action scenes there’s not a great deal happening in the plot. I’d definitely recommend reading Volumes 5 and 6 back to back if you’re in a position to.

There are some hints scattered throughout that Erlking’s revival is related to someone from Lloyd’s hometown of Kunlun, but that’s clearly something the author is building up to ,so I doubt we’ll see the payoff for a while yet. The final chapter of the book shows Lloyd returning to the academy, which is due to investigate a local dungeon that may be behind a string of disappearances. This may or may not tie into the larger narrative with Kunlun; we’ll have to wait and see!

As much fun as it was reading these chapters, I will say one problem that’s creeping up for me now is how unrealistic Lloyd’s character is. At the beginning of the series he believed himself to be incredibly weak, not realising that Kunlun was legendary for being home to powerful individuals. In these six books so far we’ve seen him face off with more and more mighty enemies, but still, Lloyd believes they’re simply bugs or in the case of Erlking, the weakest of all monsters.

Back when the story first started, Lloyd’s feelings made sense because of his sheltered upbringing, but that’s certainly not the case now he’s been attending the academy and made so many friends. I appreciate it’s also a big part of the comedy in the series, but again we have so many characters and situations now where it no longer needs to be the focus. It’s the one element of Last Dungeon Boonies that will put readers off if it continues the way it has been, especially as it seemed as if the author was moving away from that joke in the previous volume.

Suppose a Kid From the Last Dungeon Boonies Moved to a Starter Town Volume 6 comes to the West thanks to Square Enix where it continues to be translated by Andrew Cunningham. The translation reads well as always with no problems to note. Volume 7 of the series is currently scheduled for release later this month, so readers won’t have too long to wait to jump into a new arc.

Overall, Suppose a Kid from the Last Dungeon Boonies Moved to a Starter Town shows its love of impressive battles as Lloyd faces off against a Demon Lord and the current arc comes to a close. If you’re still enjoying the manga at this point, there’s not a whole lot to complain about with this instalment.

A free preview can be read on Square Enix’s website here. 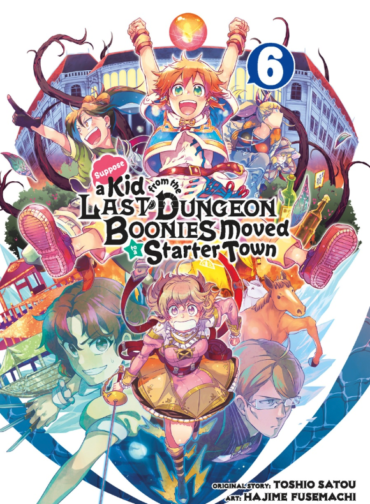