Asuka Tsukasa has just moved to London for two reasons: to study abroad and hopefully to reconnect with a mysterious girl from his memories growing up with his mother in the city. However, Asuka has zoophobia – a fear of animals – especially dogs, and with London being rather open with its love for the canine companions, it’s not going to be easy. However, when Asuka decides to pop round to his mother’s old house, he finds a mysterious garden concealed beneath it, and inside that garden is the home to many creatures he’s never seen before. One such creature, a giant black dog named Edgar with a grudge against Asuka’s mother, is actually – when in human form – the very same girl that Asuka is searching for.

Urban fantasy, despite being a relatively young genre, is hard for any new story to stand out in, as a lot of its common tropes including secret underground worlds hiding in plain sight, chosen one/special protagonist, new takes on mystical creatures and such, have been done over and over and not just in this genre but also in others such as sci-fi and young adult. Bestia is, for the most part, not that different. The male lead Asuka has special powers unknown to him, there’s a secret section of the government that takes care of mystical creatures, and Asuka’s mother was also a powerful keeper but has mysteriously gone missing. It brings a lot of elements you would have most likely read elsewhere before, but Bestia isn’t to be completely passed over as the first volume does a good job of setting up enough intrigue to make it interesting.

First of all, I personally relate to the lead, because I also happen to have a fear of dogs. Luckily for me, we do not live in the version of London shown in this book, where dogs are seen pretty much on every corner, but this book isn’t wrong in mentioning the Queen’s love of corgis so the dog mania doesn’t come completely out of nowhere, and it’s also nice to have a different lesser known phobia portrayed in manga form. The lead does have the trappings of a stereotypical ‘chosen one’ narrative, being naturally powerful and having just the right level of kindness and determination to strive through the plot without too much drama or stress to set him back, but in the introductory volume it’s to be expected.

Second of all, we have the main plot; the secret government agency with a special zoo that takes care of the mystical creatures. In this book they’re called ‘cryptids’, which is not a made-up word; according to the dictionary it is ‘an animal whose existence or survival is disputed or unsubstantiated.’ The original story creator, Makoto Sanda, did their homework not just for the name but for the key cryptids that appear in the first volume, such as Edgar being based upon the very real British Isles folklore ‘Black Dog’. This, obviously, isn’t the first time that a manga has referred to actual stories and legends for their story (the popular series The Ancient Magus’ Bride being a recent example) but it’s nice that, for a story based in England, that the author actually refers to our legends rather than shoving Japanese folklore in there. The backstory is also interesting. The ‘missing parent’ trope is here but with a different twist; normally when a parent of the hero goes missing/declared dead, it’s usually to give the lead a shortcut to sympathetic backstory, or quick reason why the hero doesn’t have parents asking where they are 24/7, or why the secret society in question would want anything to do with our lead. The missing mum is almost always idolised as well, someone who died before their prime. In Bestia, however, it’s turned on it’s head and instead is tied into a more personal and deadly mystery. It’s hinted strongly that a murder occurred in one form or another, and that the mother may not have been as angelic as our hero remembers. With  a ‘ticking clock’ introduced as well via the secret society needing Asuka’s gift to save the surviving cryptids, it all creates an interesting world which could prove to be a neat little series if the author plays their cards right.

Art is provided by Aco Arisaka, who has not much experience in the field so far with their first job providing illustrations for the Yume Nikki light novel, but it’s definitely pretty to look at. The character art is distinct and memorable, with obvious inspirations from other London-based manga such as Black Butler in some characters introduced in later chapters, although the designs for the cryptids are a mixed bag. The main ones involved in the plot are as massive, vicious and grand as described, but some of the small ones in the background look like rejected Pokémon designs. As the story is set in London, and I happen to live there, I could be very nit-picky and say that the streets look way too empty (taking place in a world where COVID doesn’t exist, one assumes) and one panel of a bus looks like it was ripped out of a children’s colouring book, but it’s hard to stay mad when it’s clearly done out of the love for the city, and the mangaka clearly wants to try and show London to be as beautiful as they see it as well.

Caleb D. Cook, translator for Bestia, has many manga under his belt from My Hero Academia to Snow White with the Red Hair, and whilst I can’t comment on how accurate the translation is, I wanted to flag up two things I really liked in his work for this volume. One: he provided translation notes at the end of each chapter, rather than saving them all for the end of the book, that means that I got context for certain words and actions whilst they were fresh in my head rather than at the end when I would likely have forgotten them. Two: whilst I appreciate the English slang words thrown in there, such as ‘wanker’ and ‘prick’, he gets bonus points from me for spelling ‘arsehole’ in the correct way (in my experience, a lot people tend to forget that one) so he gets two thumbs up from me!

Bestia has just the right mixture of familiar, unusual and interesting for an urban fantasy manga that I can definitely recommend to anyone who’s interested. Volume 2 is due out in October and Yen Press has kindly made it available digitally and physically. 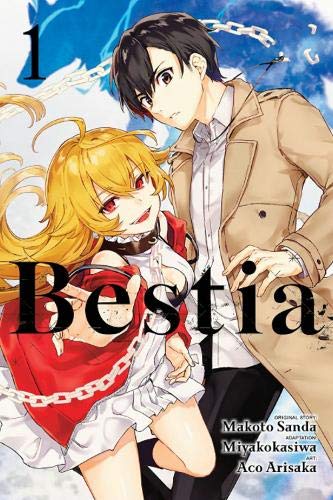 Concluding in just three volumes, can Bestia end on a high note, continuing the goodwill carried over from the first volume?