After more than six months without a new entry in the Bungo Stray Dogs light novel series, it now makes a triumphant return to our shelves. Volume 6 was an alternate universe storyline about Akutagawa and Atsushi, but Volume 7 promises to shed some light on the origin story of a different member of the port mafia.

This time the story takes place before the beginning of the Bungo Stray Dogs manga, back when Ougai Mori had just become the head of the Port Mafia. Dazai is yet to join the group himself, but having witnessed the death of the previous boss, he’s certainly tied to the group and Mori is more than happy to use him as his right-hand man. So when rumours start circulating that there have been sightings of the old boss in Suribachi City, Mori asks Dazai to investigate.

What awaits Dazai in Suribachi is a run-in with the Sheep gang, who are enemies of the Port Mafia. Their leader is Chuuya Nakahara, a Skill user who can manipulate gravity to fight which makes him an incredibly strong enemy. Unfortunately for Chuuya, Dazai can nullify Skills and that allows him to overpower Chuuya when they come to blows. Now having taken the boy as a hostage, Dazai discovers that a mysterious being known as Arahabaki is on the move. This entity created Suribachi City in a powerful explosion in the past, so it’s certainly not an enemy to be taken lightly!

In the end, Mori instructs Dazai and Chuuya to work together to find out how Arahabaki and the sightings of the old Port Mafia boss connect. Neither of the boys is thrilled by this decision, seeing as how they get on like cats and dogs, but Chuuya reluctantly gives in when Mori reveals they’re holding some of the Sheep as hostages.

If you’re at all familiar with the Bungo Stray Dogs manga or anime, then you’ll already be aware that Dazai and Chuuya are known as a dream team. Even in the present day they still bicker endlessly, but it’s clear they trust one another a great deal (even now they’re on different sides with Dazai having joined the Armed Detective Agency). This story certainly acts as a solid introduction for Chuuya and you can certainly see how the two developed such a firm friendship throughout this mission.

If you’ve watched Season 3 of the anime. you’ll recognise this storyline as it was adapted for the first three episodes of the season. The light novel doesn’t offer anything in particular over the anime, but it still proves an entertaining read if you’re a fan of these two characters.

In the afterword, author Kafka Asagiri mentions that this story was originally given as a bonus to people who went to see Bungo Stray Dogs: Dead Apple during its second week of theatrical release in Japan, while Volume 6 was originally a bonus story given during the first week. This makes a lot of sense, since the focus of both stories is on the leading cast members of the film: Dazai, Chuuya, Akutagawa and Atsushi. Asagiri also promises that Dazai and Chuuya’s story is set to continue in Volume 8, so we’ll be remaining in the past for now!

Bungo Stray Dogs Volume 7 comes to the West thanks to Yen Press and has been translated by Matt Rutsohn. As usual, the translation reads well with no issues to note. Volume 8 of the series is scheduled for a release in June and this one will get us caught up to the Japanese releases so far.

Overall, Bungo Stray Dogs Volume 7 proves a must-have for fans of Dazai and Chuuya. These books have more than proven themselves capable of diving into the origins of a member of the cast and successfully spinning interesting stories out of them. 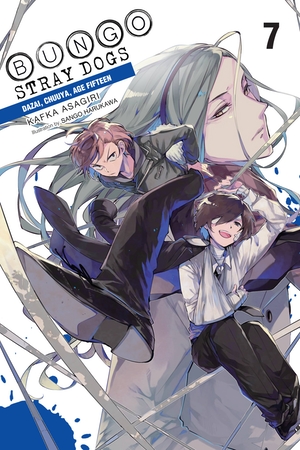