In Volume 7 of the Bungo Stray Dog light novel series, we explored the origin of how Dazai and Chuuya first met and joined the Port Mafia. Volume 8 takes place a year later where we find the two competing to become a new executive member of the group. But when Chuuya finds himself targetted by the King of Assassins, the two may have to put their differences aside once more.

Chuuya has made a name for himself in the Port Mafia by managing a gemstone black market together with a group known as the Flags. While celebrating Chuuya’s first anniversary of being in the Port Mafia, the group is approached by a detective from Europole known as Adam Frankenstein, an autonomous humanoid supercomputer designed for law enforcement.

Adam warns Chuuya that he’s being targeted by the King of Assassins (known otherwise as Paul Verlaine) and to cooperate with Europole’s investigation. Wielding the power of gravity, Chuuya argues that he and the Port Mafia have nothing to fear from Paul, but not long after he’s captured by Paul who reveals that the Flags have all been murdered by his hand and to surrender. He also tells Chuuya that they’re brothers, and he’s willing to kill everyone Chuuya cares about to get his way.

Of course, Chuuya wants revenge for the murder of his friends and finds himself with no choice but to team up with Adam. While Adam’s combat abilities are more than adequate to be Chuuya’s partner, his personality is less finely tuned, and he finds himself constantly confused by Chuuya’s decisions which are rooted in emotion and unlike the logical decisions of an AI. Nevertheless, the two are determined to put a stop to Paul and their actions may even uncover more about Chuuya’s history which remains shrouded in mystery.

Author Kafka Asagiri comments in the afterword that this is the end of the ‘Twin Dark Past Arc’, which tells of Dazai and Chuuya’s past and because of that it crams in a lot of information. Not only is it picking up leftover plot threads from Volume 7, but it’s also trying to combine that with a new story and the introduction of new characters. On the whole, I think this is successful and by the end of this book, I felt satisfied both with the story and with Chuuya’s development. Plus, unlike the previous book, this one hasn’t yet been adapted into anime, so it was new content!

Chuuya has long wondered if he was human or something artificially created and even if he learns the answer, will that change his way of living? While this story is about protecting the city and his companions from a madman, Chuuya still wrestles with this question and bounces his thoughts off of those around him. It’s something resolved in this arc, so in the manga and surrounding media, it’s not something we’ve seen him struggle with before and perhaps that’s what makes it particularly compelling as we readers hope to see him reach an answer he can make peace with.

What I was a little sad about is that, despite this being a continuation of Chuuya and Dazai’s history, we don’t get to see a lot of Dazai until closer to the end. I appreciate this is because of Adam being present, but it’s always so much fun when Dazai and Chuuya are together that I couldn’t help but want to see a little more of that. Not that we haven’t had plenty of opportunities to enjoy that in the wider Bungo Stray Dogs universe, it must be said…

Bungo Stray Dogs Volume 8 comes to the West thanks to Yen Press and continues to be translated by Matt Rutsohn. The translation reads well with no issues to note, although the book could have done with another QA pass since there are some typos here and there. However, it’s a particularly long book compared to the usual, so I’m not surprised some small issues slipped through the cracks and they’re certainly not prevalent enough to ruin anyone’s enjoyment.

This release gets us caught up with the light novel releases in Japan so far, so we won’t be getting any more for a while. Although this one came out in Japan in early 2021 and I’d be shocked if something new wasn’t in the works for when the anime returns next year, so fingers crossed we will see more soon!

Overall, Volume 8 of the Bungo Stray Dogs light novel series brings an end to Dazai and Chuuya’s history together in the Port Mafia. This volume shows us how their various relationships developed as well as pitting the two against a formidable foe. Certainly a story that fans of the franchise won’t want to miss! 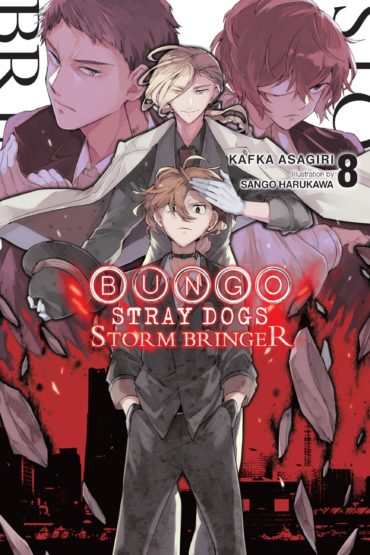