If you’re a fan of Bungo Stray Dogs, then you’ll almost certainly have heard the name Bungo Stray Dogs Wan! thanks to the anime adaptation that aired early last year. Now Yen Press has brought the first volume of the manga to the English market and it’s time for us to find out if it’s as delightful as the rest of the franchise.

Bungo Stray Dogs Wan! takes the characters we know and love and transforms them into chibi versions of themselves. Rather than fighting crime as we normally see them do, the members of the Armed Detective Agency spend their days peacefully. Many of these storylines also result in the group running into the members of the Port Mafia, whom they understandably end up bickering with. The results of these chapters are always hilarious and are sure to bring a smile to your face.

Each chapter is about 9 pages in total and is made up of a combination of 4-Koma pages and more traditional manga pages. In this volume there are 21 chapters in total, offering a mixture of focusing on either an individual character or one of the two groups. We see the Armed Detective Agency go flower viewing, help a lost cat and hold an oden party among other things. Some more fantastical storylines see the cast as babies being looked after by Dazai and Akiko at daycare and another sees them performing a play.

While these concepts may sound uninteresting on paper, how the characters go about their day is where the fun begins. With the flower viewing, for example, the Armed Detective Agency end up sitting next to the Port Mafia which results in Chuya whining about wanting to move while Akutagawa is pleased to find himself sitting with Dazai. Meanwhile, in the oden party chapter, Atsushi fears for his life when Dazai reveals he has no idea how to cook and quickly sends out an SOS to Kunikida in the hopes of having him rein in Dazai.

Another highlight for me is when Dazai drags Atsushi into helping him clean out the office lockers, resulting in us seeing some of the hidden treasures (or junk) that the team keep hidden away. There’s another where Dazai is actually doing work for a change (without being forced into it) and that sets off numerous disasters around the world because it’s such a strange turn of events. This eventually results in Kunikida having to stop him from working before something truly horrific happens to Earth.

How much you care about Bungo Stray Dogs Wan! will depend on how much you like the extended cast. There are enough characters and chapters where even if one isn’t to your taste, another will be. Of course, to get the most value out of it, you’re better off being fairly caught up with the main series because there are characters in here that we didn’t meet until Season 3 of the anime!

In some ways that’s a shame because it’s not as newcomer-friendly as you’d expect, but given how long both the original manga and anime have been available in English this probably isn’t a huge barrier to the average reader unless you’re only just discovering Bungo Stray Dogs right now.

While original creators Kafka Asagiri and Sango Harukawa are credited on the front of this book, the artwork and stories here are handled by Neco Kanai (Kemono Friends a la Carte). On the whole, I think Kanai has managed to capture what makes Bungo Stray Dogs work perfectly by having characters from all walks of life come together and be silly together. I like the mixture of 4-Koma and traditional manga style pages to tell the jokes and I think it works better than if it had been exclusively one or the other. The artwork captures the expressions of the cast well and although sometimes panels get crowded between the number of characters and the speech bubbles, this doesn’t prove to be a problem. With so many characters, settings and jokes to juggle, I think Kanai has done a fantastic job with the series.

As previously mentioned, Bungo Stray Dogs Wan! Volume 1 comes to the West thanks to Yen Press and has been translated by Kevin Gifford (who also works on the main series and Another Story). The translation reads well with no issues to note and there are some translation notes at the back for some of the more obscure jokes and references made. There are also colour pages at the beginning, which are a nice extra. The series is ongoing in Japan since 2016 and is at 9 volumes, Volume 2 is due out in English in June.

Overall, this collection of entertaining stories about the everyday lives of the Bungo Stray Dogs cast is sure to delight readers. With short snappy chapters, this first book has something for everyone, no matter who your favourite character is. 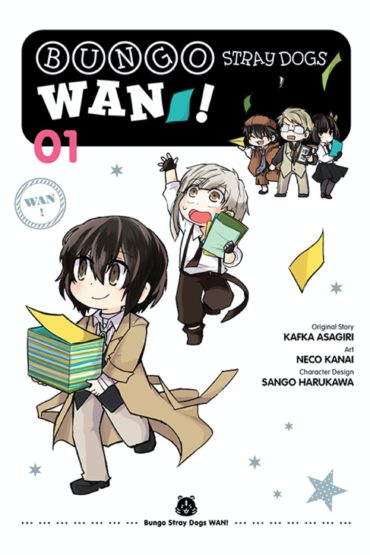