Volume 6 of Combatants Will Be Dispatched! is here and now we’ve gotten ourselves caught up to the Japanese releases. Having defeated the Demon Lord’s Army and taken the Demon Lord’s daughter captive in Volume 5, just what’s in store for our heroes this time?

At the end of the last volume, our heroes staged the death of Viper, the Demon Lord’s daughter and now she’s been moved into the position of being a Supreme Leader of Kisaragi. Six thinks that now all the demon-related problems are over he’ll have a chance to relax, but of course, it’s not long before the momentary peace is completely shattered!

Reports come in that the Kingdom of Toris has been taken over. Readers may remember Toris from Volume 2 when our cast are sent there to bargain for water crystals that are mined there and which the Kingdom of Grace still relies on. With Toris now being taken over, this renews fears of a water crisis.

Alice reasons that they can’t afford to have anyone else take over this world and prepares to start a war with the inhabitants of Toris, but while this is happening. a strange newcomer in the Kingdom of Grace starts causing trouble. The newcomer is called Adelheid Krueger and she declares herself an “Ally of justice”, which never means anything good in a series like this! To start with, Six wonders if she’s a hero from Earth, but instead, she seems to be from a heroic group created to support the ‘Chosen One’ in their quest to defeat the Demon Lord (something our cast already accomplished, whoops).

For someone who’s supposed to be a do-gooder, Adelheid does nothing but cause trouble and get arrested by the police. She’s caused so many problems for the Kingdom of Grace that it makes Kisaragi look like a group of heroes and that’s saying a lot, considering their status as villains. It’s certainly interesting to see the contrast between the two though and sets up well for this world having a heroic band of enemies for Kisaragi to fight in the coming volumes.

This entry in the series was released in Japan in September 2020, so long before the anime adaptation aired and in the afterward author Natsume Akatsuki talks about his excitement for the project, but also his difficulties in writing this book. Akatsuki admits he was worn out after finishing KonoSuba (which is also approaching its end in English) and missed quite a few deadlines for this book. Combatants Will Be Dispatched! has always been released relatively slowly, but with no Volume 7 yet in sight, I hope Akatsuki is doing okay and hasn’t burnt himself out completely.

I say the above not only because I enjoy Akatsuki’s work, but also because it’s clear from the way Akatsuki talks in the afterward that he has a clear end-goal for the series and with the introduction of Adelheid, the story is setting up for a notable turning point. It would be a shame if we never got to see what he had in mind after this.

Combatants Will Be Dispatched! Volume 6 comes to the West thanks to Yen Press and continues to be translated by Noboru Akimoto. The translation reads well, but there is one scene where Viper’s powers are being explained where there’s clearly a word missing since it was impossible to work out what the sentence meant. This isn’t a huge problem of course and doesn’t tarnish the book overall, it was just on my mind for a while after I noticed it and spent time trying to figure it out.

Overall, Combatants Will Be Dispatched! Volume 6 is one of the best entries in the series so far and sets up for some interesting future developments. If nothing else it’s great fun having an idiot hero of justice interacting with Six and his group and no matter what happens, she’ll be a welcome addition to the series. 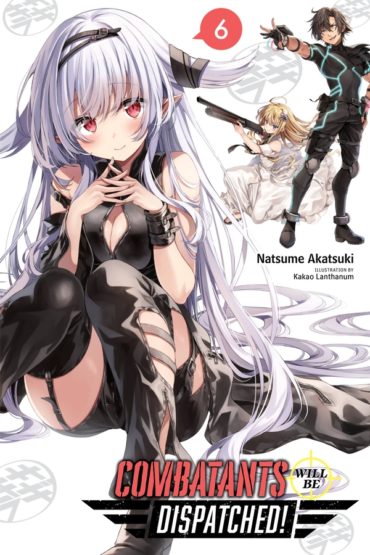 Title
Combatants Will Be Dispatched Volume 6