Satsuki Yoshino the author behind popular manga Barakamon and Handa-kun returns to the English market with a brand new series: Yoshi no Zuikara. Today I’m here to take a look at Volume 1 and find out what’s so captivating about the creator’s work.

The story follows thirty-two-year-old Tohno Naruhiko, a mangaka living in a small village on a remote island. Tohno has made his living for the last ten years by writing fantasy stories but after his last two series were cancelled, his editor, Hayashi, comes to him with a different idea.

Instead of another fantasy, Hayashi asks Tohno if he’d like to write a slice-of-life manga set on a remote island like the one he lives on. Tohno isn’t thrilled by the idea, but filled with fear of never being able to draw manga again otherwise, he begins work on a manuscript. Taking steps into an unfamiliar genre, can the mangaka revive his career or is he fated to face cancellation once again?

The story Tohno writes revolves around four high school students who are reminiscing about an old teacher of theirs who moved away. It turns out that one of the four still exchanges letters with the teacher, but one day they suddenly stopped arriving and he wonders if something has happened to her. Together the group decide to dig up a time capsule they buried and put all their heartfelt emotions into a letter to send off to the teacher, hoping that their words will reach her and help if she is struggling with something.

What’s interesting about the manga Tohno creates is that we as readers get to experience the first chapter as Chapter 1 of Yoshi no Zuikara, we don’t even meet Tohno until the final page! It’s an interesting fake-out making you believe that this story is what the series is about before it changes focus to what’s actually going on. This is also an extremely brave move by mangaka Satsuki Yoshino, I feel, given how important first impressions with a Chapter 1 can be.

Above all us, giving us a chapter of Tohno’s work makes the readers extremely invested in the story he’s creating. This is in a similar way to Bakuman, where the characters have panels of their series here and there but this is on a much larger scale to that.

Working on a slice-of-life title is something Tohno would never have considered himself. He’s always been an introvert and spent his younger years reading and drawing manga, not caring about anything else. He believes that manga should present you with something that isn’t possible in real life. Perhaps creating this new series will show him the importance of a more down-to-earth tale too.

Assisting Tohno both with his manga and his daily life is twenty-two-year-old Toshihito Matsuo, who is an outgoing and cheerful man. When Tohno needs to go out to gather research materials, Toshihito is always by his side and his more happy-go-lucky attitude contrasts nicely with Tohno, who is quiet and more withdrawn.

In terms of Yoshi no Zuikara’s artwork, mangaka Satsuki Yoshino presents a clean and detailed series with an emphasis on background details and conveying the cast’s feelings in their expressions. There is quite a lot of dialogue from page to page but this is balanced by larger panels that make room for both the text and some detailed images. One thing I especially appreciated is that Yoshino managed to present Tohno’s manga in a slightly different style to Yoshi no Zuikara itself and that attention to detail is really meaningful. I’ve never read any of Yoshino’s other works, but I can certainly see the experience shining through here and also why people are so fond of them.

Yoshi no Zuikara comes to the West thanks to Yen Press and has been translated by Taylor Engel. The translation reads well with no issues and there are many translation notes included at the back of the book, mostly covering cultural references. The series is on-going in Japan at three volumes and Yen Press have the second scheduled for release in November.

Overall, Yoshi no Zuikara is a delightful manga from the creator of Barakamon. If you’re a fan of their work or simply interested in stories about creating manga then this is a must-have. I’m certainly looking forward to seeing where the protagonist’s efforts take him going forward! 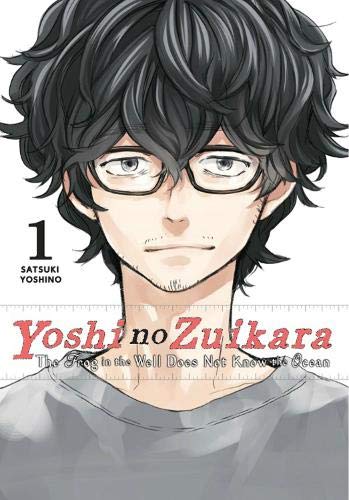 Title
Yoshi no Zuikara: The Frog in the Well Does Not Know the Ocean Volume 1

In Volume 2 of Yoshi no Zuikara protagonist Tohno finds himself facing a crisis when he’s given the opportunity to attend a book signing for his series! Now he must prepare himself for his first visit to Tokyo where he’ll not only have to meet his fans but also his editor for the first time.