In the first volume of Yoshi no Zuikara we met mangaka Tohno Naruhiko, who was embarking on a new journey creating his first slice-of-life series. Now the first volume has been released and it’s selling better than anyone could have imagined, which brings with it its own share of troubles for Tohno!

To celebrate his series selling so well, Tohno’s publisher wants to hold a book signing in Tokyo. Of course, our protagonist happily agrees, but soon after his nerves begin to kick in. Not only has Tohno never left his hometown before, but he begins to worry that no one will show up to the event. Even if they do, what does he do about his messy signature that a local fan has already called trash?

As Tohno stresses about every little thing, it’s assistant Toshihito Matsuo to the rescue as he does everything he can to make Tohno’s trip as carefree as possible by ordering his outfit and helping him hold practice sessions to get used to drawing on command. Although he can’t accompany Tohno to Tokyo, he can at least make sure his boss is suitably prepared for a short stay in the big city.

Once in Tokyo, Tohno gets to meet his editor Hayashi in person for the first time. His first impression is that Hayashi is incredibly young to be working as an editor, but as he spends time with her, he soon realises just how passionate she is about his work. With her by his side, perhaps he can make it through the book signing okay.

While all of Volume 2 revolves around the book signing, it still finds some time to dedicate to the comedy we grew fond of in Volume 1. This comes thanks to the introduction of a new character, Hiiro, who is the daughter of one of Tohno’s former classmates. Hiiro has become a big fan of Tohno’s work thanks to the introduction of “Hii-niichan” and believes he should become the protagonist!

Hiiro is so determined to get this point across that she’s been dropping hate mail into Tohno’s mailbox every day, hoping for him to cave in to the pressure. Tohno can’t bring himself to dislike someone who loves one of his characters so passionately, so throughout Volume 2 the two clumsily grow a friendship. It’s very endearing to watch and Hiiro’s fangirl antics will no doubt be familiar to many of us (except for the hate mail – I hope!).

If you enjoyed Volume 1 then you certainly won’t be disappointed by Volume 2, which showcases the same skilful storytelling and good humour from author Satsuki Yoshino. There is plenty of development for our protagonist, too, which is especially important in a series like this one. Tohno is always moving forward and facing his fears, even when put in the spotlight thanks to his series selling so well. He’s afraid of getting cancelled again, but that won’t prevent him from doing his absolute best for as long as his manga is running.

One thing I was surprised to learn after reading this instalment is that Yoshi no Zuikara ended in Japan with its third volume. As things stand right now, I’m not sure that’s going to prove a satisfying stopping point. However, these books haven’t been short but perhaps there will be enough time to wrap everything up well. Either way, I’m sure I’ll be sad to say goodbye to these characters so soon, especially after meeting Hayashi this time.

As previously mentioned Yoshi no Zuikara comes to the West thanks to Yen Press and has been translated by Taylor Engel. The translation reads well with no issues to note and there are two pages of helpful notes at the back for more obscure references. The third and final volume isn’t currently scheduled for an English release beyond ‘next year’, so we could be waiting awhile for that.

Overall, Yoshi no Zuikara Volume 2 continues to offer an interesting and entertaining read. If you enjoyed the first book ,then you’ll certainly be happy with more of the same here as we see Tohno face his fears and take a trip to the big city. 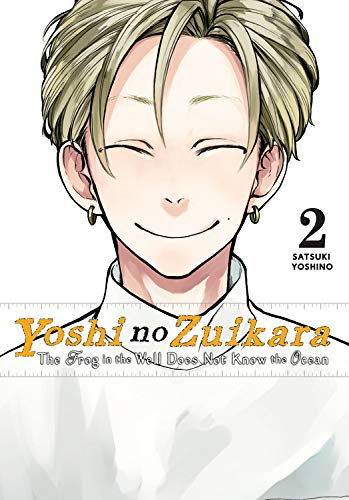 Title
Yoshi no Zuikara: The Frog in the Well Does Not Know the Ocean Volume 2

From the creator of Barakamon comes a new series! Protagonist Tohno Naruhiko is a struggling mangaka who finds himself moving into a new genre for his latest work, but will he be able to make it big with something so different to his usual stories?