While we’re well into the Christmas season, in the world of Suppose a Kid From the Last Dungeon Boonies Moved to a Starter Town it’s still the middle of summer and Lloyd is about to use his holiday weekend working part-time. With Volume 5 in hand, let’s find out what trouble our protagonist gets himself into now!

For the holiday weekend, Lloyd has been invited to work at the luxury hotel Reiyokaku as a bellboy. Thanks to Lloyd’s superhuman strength and skills, the manager is sure he will be able to help keep the place clean and help out in the kitchen during this busy period. However, unbeknownst to Lloyd, in a town near the hotel there are strange cases of people falling into comas and his boss worries that the culprit could be staying at the hotel…

Naturally, Lloyd remains oblivious to any nefarious schemes developing in the background and simply focuses on doing a good job. He works under senior staff member Kikyo, who is here to investigate the coma cases as well. Because of Lloyd’s unbelievable strength, Kikyo quickly concludes that Lloyd must be host to a treant sapling that has been stolen from a nearby monster research lab. If that’s the case then she must eliminate it before it can bring harm to anyone else!

Of course, we readers know that there is nothing wrong with Lloyd and this is just his normal every day, but Kikyo is unwilling to accept this and carries on her plot to treat him in secret. Meanwhile, Lloyd is soon joined by friends from the academy who have all come to the hotel for different reasons.

Selen has been invited to Reiyokaku by her father for a weekend stay together as he introduces her to an engagement meeting he has set up. Now that the cursed belt has finally been removed (thanks to Lloyd in Volume 1), Selen’s father sees the value in setting her up with a nobleman as quickly as possible, even if that’s against her wishes. Selen has never felt like her father loved her and since she’s already very much in love with Lloyd, she’s unimpressed by the idea of being sold off like this.

With Lloyd working at the hotel, it’s not long before Selen sets eyes on him and decides to go on a date with him instead of the guy she’s supposed to be meeting. Thankfully for Lloyd, mercenary and friend Riho is also staying at the hotel and manages to keep Selen in check before her advances overwhelm our poor protagonist.

While this is happening, the cast do accidentally start to unravel the truth behind the coma cases, especially once Marie arrives to help (although she secretly just wanted to spend time with Lloyd). We’ll have to wait until Volume 6 to see how this will all wrap up, but at least the content we’ve had so far has been interesting and different to the previous arc.

Volume 5 of the series excels because it goes back to what made Last Dungeon Boonies interesting to begin with. The manga is at its best when it’s making fun of the fact Lloyd is overpowered and oblivious to it. Yes sometimes it overdoes the joke to the point of it not being funny, but since we’re introduced to some new characters this time around, it becomes entertaining again as we watch their reactions.

Suppose a Kid From the Last Dungeon Boonies Moved to a Starter Town Volume 5 comes to the West thanks to Square Enix Manga and continues to be translated by Andrew Cunningham. The translation reads well with no issues to note. Also included in this release is a colour page at the beginning and a selection of bonus illustrations at the end which show all the special images drawn for the series release in Japan up until the release of Volume 5 there. Volume 6 of the series is currently scheduled for October 2022, so it will be quite a while until we get to see the conclusion of this arc.

Overall, Suppose a Kid From the Last Dungeon Boonies Moved to a Starter Town Volume 5 enters a new arc with the kind of enthusiasm that will draw in the reader as they sit back and enjoy the latest trouble our protagonist finds himself pulled into. This manga continues to be highly recommendable if you’ve enjoyed the premise so far. 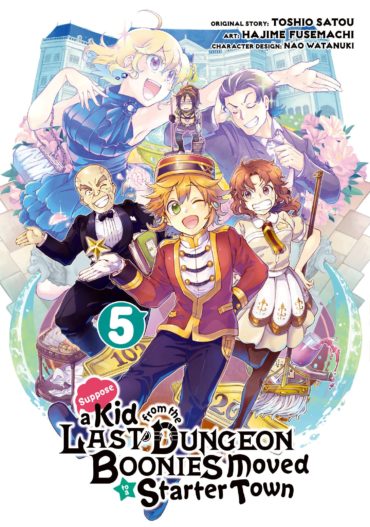 The Strongest Sage with the Weakest Crest Volume 6 Review

The demon invasion looms in The Strongest Sage with the Weakest Crest Volume 6, but protagonist Matthias is well prepared and puts the final touches in place while training his companions for the difficult battle ahead.