It has been a while since we’ve had any manga involving a cat-and-mouse game between a killer and a detective, so here to offer us something new is Yen Press with Can’t Stop Cursing You Volume 1. Does it prove an interesting read? Let’s find out!

Our story takes place in a world where Curse Killings are on the rise. These are where people are killed by a Curse wielded by a Curse Killer, someone who has entered into a contract with a Curse God. At the beginning of this volume, we meet Mikiya Nojima, the prince of Yamimori High, whom no one thinks would even hurt a fly. However, he’s actually in a contract with a Curse God who tells him he must kill thirty people within a month or certain doom awaits him.

Mikiya is more than happy to take on this challenge and gleefully starts killing students at his school, but unluckily for him, teacher Kiyoharu Saeyama is a Curse Breaker, one who is tasked with bringing an end to the Curse Killings.

To begin with, Mikiya recklessly kills a girl in his class along with a teacher, which gives Saeyama plenty of reason to suspect the culprit is someone from his class. Not only that, but Saeyama has an ability that lets him communicate with Thoughtforms, which are a Curse’s lingering scent. Although they can’t speak, they are capable of answering yes or no questions and naturally, Saeyama asks if the culprit is from Mikiya’s class, to which it nods yes.

This quickly leads to the rest of the volume being Mikiya figuring out a way to kill Saeyama without first being found out as the Curse Killer. To perform the killings, Mikiya needs to know the phone number of the person he wants to kill and once they receive the cursed phone call and hear the recorded message they will instantly meet their end. This means Mikiya needs to get closer to Saeyama and obtain his phone number without him realising in order to defeat him.

Although Mikiya is the character we see most of the story through, Saeyama is the true protagonist and it’s easy to root for his victory over Mikiya. Even more so once the book dives into Mikiya’s backstory and reveals what a horrible human being he has always been, even before gaining the Curse Killing abilities.

Most importantly for a story like this, it manages to draw the reader in and showcase a compelling game of wits. It’s not all that dissimilar to a series like Death Note, with the ability to kill granted by a god and a smart detective giving chase. The only thing I hope we get to see more of going forward is why Saeyama has the abilities he does and his backstory, which isn’t present here.

Can’t Stop Cursing You is by author Kensuke Koba and artist Natsuko Uruma. I think as far as the story goes Koba made the right decision to focus on Mikiya and the Curse Killings rather than Saeyama, since now we’ve seen everything in action it’s easier to be invested in the wider plot going forward. However, what’s most interesting in regards to the story is that Mikiya’s case is over in Volume 1 so in the next book, we’ll be moving on to a new character, which will either work in the series favour or be a downside.

In regards to the art, Uruma uses a lot of small panels and because there is plenty of dialogue on a given page there isn’t always room for more than a character profile shot, but this works out for the better since a lot of the drama is conveyed through the cast’s expressions. Uruma does make use of larger panels when something more important is happening too (like a death), so it’s not as though the volume is completely absent of more detailed shots.

As far as first volumes go, I think Koba and Uruma have done a good job in bringing an interesting story to the table with plenty of room for growth. While not being a completely original concept in terms of gods gifting the power to kill others, the fact that there isn’t a lot like this ongoing in the English market right now will see it through. Although those hoping for a longer game of cat and mouse will be disappointed by the focus moving to another Curse Killer.

Can’t Stop Cursing You Volume 1 comes to the UK thanks to Yen Press and has been translated by Christina Rose. The translation reads well with no issues to note and there are translation notes at the back of the book, although these aren’t needed for anything important to the plot. The series is ongoing in Japan at three volumes and Yen have Volume 2 of the series set for an English release in July.

Overall, Can’t Stop Cursing You proves itself as a compelling new series that sits comfortably alongside a giant like Death Note for its interesting cat-and-mouse game. While there is potential for it to go downhill in the next instalment, right now I remain invested in seeing what else it has up its sleeve. 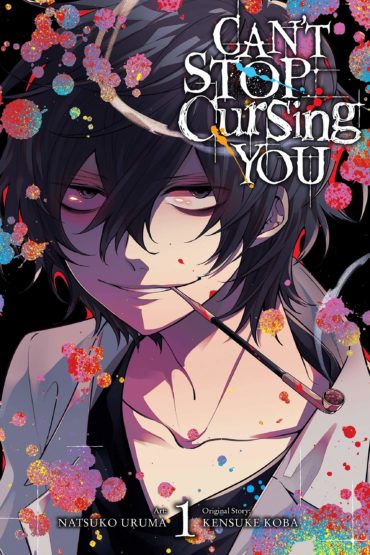 Protagonist Saeyama finds himself dealing with some brutal Curse Killers in Volumes 2 and 3 of Can’t Stop Cursing You. Will he be able to figure out their motivations and put a stop to the killings before more innocents are harmed?