Distributor Funimation has announced they will be releasing the third theatrical film for My Hero Academia‘s franchise to the UK & Ireland theatrical cinema screens this October 2021 alongside United States, Canada, Australia, New Zealand and South Africa territories (Scandinavia, Mexico, Brazil, Chile, Colombia and Peru will also receive the film but the release date is yet to be determined).

The third film My Hero Academia: World Heroes’ Mission is scheduled for Friday 29th October 2021 and will be screened in both English and Japanese audio with English subtitles. The date will also be the same for United States and Canada. Australia, New Zealand and South Africa will be able to watch the film a day early on Thursday 28th October.

Tickets are expected to go live starting 1st October, according to the official blog post.

“In My Hero Academia: World Heroes’ Mission, U.A. High School students Izuku Midoriya, Shoto Todoroki, and Katsuki Bakugo face the greatest crisis in My Hero Academia history, with only two hours to save the world! During their internship with the number one Pro Hero Endeavor Agency, Deku and his new friend Rody find themselves wanted nationwide for a crime they didn’t commit. Can Deku and his friends stop Humarise’s global plans of eliminating all Quirks?”
Plot Synopsis via Funimation

Produced by studio Bones, World Heroes’ Mission is directed by Kenji Nagasaki, written by Yōsuke Kuroda with music composed by Yuki Hayashi and is an original story based on Kōhei Horikoshi’s manga series. In Japan it was released on 6th August 2021 and currently earned over 2 Billion Yen in the box office, making World Heroes’ Mission the highest-earning film for the franchise.

My Hero Academia has been licensed and released on home video by Funimation with Seasons 1, 2, 3 & 4 available on Blu-ray as well as the previous two films Two Heroes and Heroes Rising. Season 5 is currently simulcasting on Crunchyroll subbed and Funimation both dubbed and subbed. 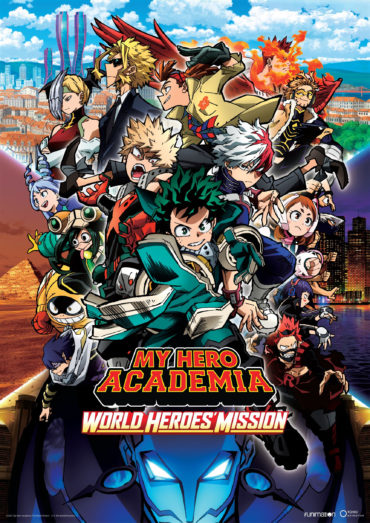