As the title of this manga may suggest, Beauty and the Beast of Paradise Lost is a loose adaptation of the original French fairy tale, with author Kaori Yuki giving it a dark and mysterious spin of her own.

The story is set in a small sleepy village where local folk tales tell of a beast that hides in the nearby woods which kidnaps and eats beautiful women. While it soon becomes obvious there is some truth behind the myth, not everything is as it seems.

The young Belle lives in this village with her mother and father. She is an adventurous and tomboyish young girl with mysterious pale violet hair and an odd rose-shaped birthmark that have always marked her out as different and caused her parents no end of concern. One day she pulls her mother into the woods looking for a red rose that she can use as a hair accessory but is quickly met with disaster as they come across the fabled beast. While Belle manages to escape, her mother isn’t so lucky and falls into the clutches of the beast. When Belle’s mother later turns up dead with her face appearing completely blank, her father is forced to cremate his wife lest she become a zombie-like Idole, corpses that hunt down humans and consume faces to replace the one they lost. Breaking down due to this horrific turn of events, Belle’s father locks his daughter in the house, telling her she cannot be seen because she is too ugly.

Skip ahead five years, and Belle is now working as a seamstress for her good-for-nothing father, who tends to spend all his time drinking down the pub. When the beast that killed her mother suddenly returns, Belle gathers her courage and follows it into the woods in search of answers, a decision that will pull her into a mysterious and fantastical adventure.

This first volume opens with a strong set of chapters that mostly focus on establishing the main cast of characters and the mysteries that swirl around them, presenting you with lots of questions that all set up for a fascinating tale.

The first thing you’ll probably ask is “what is up with Belle’s hair and birthmark?” as it’s obvious right from the off that Belle is a bit special, and that these specific elements will be a key part of the story. They are touched upon a little bit, but it will probably take some time before they fully come into play, and I’m certainly looking forward to seeing how Kaori Yuki uses them. I did find myself really liking Belle as a character though, as she is quite captivating. Due to her father’s conditioning, she often appears somewhat weak and unsure of herself, but shows flashes of strength when pushed into a corner. While the weaker parts of her character can be frustrating, you still want to root for her regardless and hope that she will come out shining at the other end.

As for the rest of the cast, well they’re all really cool, but it’s hard to go into detail without spoiling an early twist that tilts the story more towards the original fairy tale. That said, a lot of them aren’t quite what you expect from first appearances; there’s a lot of funny little moments that really help to build a connection with them and offer a nice contrast with the tragedy of their overall situation.

The supernatural elements are also fascinating to dig into, and give the world presented here a unique flavour. Just why is the beast stealing faces and turning women into zombies and who is the mysterious master that the beast refers to? Well, at least one of these is answered here, but even then, you get only more questions as it sets up a lot of different plot threads. You do have to wonder if it’s trying to do too much at once, but honestly, if it can find a decent way to tie all of these together later on, then I’m all for it. While I wouldn’t say it’s strictly horror, some of the stuff it presents here is quite shocking and really plays with that inherent darkness you get in fairy tales, which is nice to see.

The story in general though seems well paced and put together, although the opening chapter does struggle with the passage of time a bit, as it isn’t entirely clear how long it takes for Belle’s mother to be found dead after the adventure into the woods.

Kaori Yuki’s artwork is nice and is probably one of the best things about this series so far. Characters are highly detailed and show a lot of emotion in their faces, making the manga feel very expressive. There’s also a lot of work gone into costume design, pulling off the classical French period style of dress really well. Meanwhile, monsters such as the beast and the Idoles are given a pretty horrifying look, with the latter in particular being striking with toothy mouths. There’s not as much detail put into the backgrounds, but it doesn’t necessarily feel like it needs it, as it has enough to carry it through the strength of its story and characters. There are some nice visual touches at times though, such as making Belle’s room at home look and feel like an actual birdcage.

The series is published by Kodansha and is available both digitally and physically. The physical book has a nice premium feel to it and is slightly taller than your average manga volume. The volume has been translated into English by Rose Padgett and reads well with no issues to note.

Overall, Beauty and the Beast of Paradise Lost gets off to a strong start, offering a dark and mysterious twist on the classic fairy tale, filled with fascinating and mysterious characters and almost too many questions to set up the main plot of the story. If you’re looking for a promising new dark fantasy, then I’d highly recommend giving this one a go.

Read a free preview of the manga at Kodansha’s website. 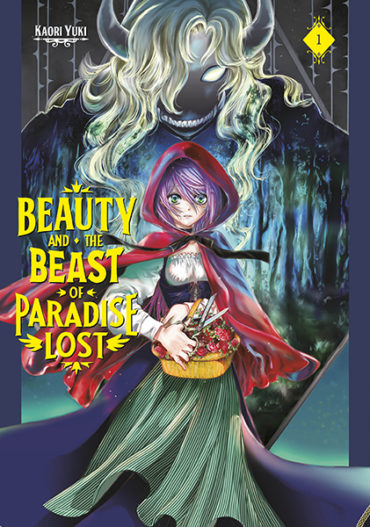 Title
Beauty and the Beast of Paradise Lost Volume 1