If you’ve been enjoying the intrigue and mystery of Kaori Yuki’s Beauty and the Beast of Paradise Lost, then this fourth volume of the series should really grab you as it throws up some fascinating developments and tons of drama.

Following the third volume’s surprising cliff-hanger, Princess Belle has finally awoken, yet what would normally be a cause of celebration is anything but for our Belle, who faces heartbreak as she realises that her love for the Beast will never be requited. Forced to become the Princess’ attendant, Belle must now face her feelings as she works for a woman who really just wants her out of the way, lest her fiancé’s eyes wander to the new prettiest girl in the room. Meanwhile at the capital, Madame La Médium’s final plans are about to come to fruition, as she plans a trap to finish off the Beast once and for all.

With the series ending at Volume 5, you really get the sense that this volume is the turning point towards the end, with the story placing more of a focus on drama and plot development over the more action-oriented third volume. This is a switch that is all for the better, as it is packed with a lot of different twists and turns that really change your understanding of the story and its characters.

The awakening of Princess Belle here is key as it completely changes the character dynamics and puts our Belle in a very awkward position, with her now having to deal with the woman the man she loves is engaged to. It’s great at displaying the emotions of its characters through both its art and its dialogue, as you can really feel Belle’s self-confidence crumble as she reverts more towards how she was in the first volume in a “back down to Earth with a bump” kind of style.

Of course, with this being Belle’s story you aren’t supposed to like the Princess, and it’s definitely easier to spot her character flaws as she never feels quite right. As much as she smiles for the castle residents, a lot of the artwork gives her an air of superiority and entitlement, often sporting a stern and dissatisfied look. You just get the feeling that she’s probably just in this for the power and status despite how much she says she loves the beastly Prince Cyril, and there’s quite a few character moments and flashbacks that really reinforce this impression, particularly with a big set piece halfway through which really had me thinking “wow this is one cruel woman”.

While the appearance of the Princess does take up a large chunk of this volume, the side characters aren’t forgotten about either thankfully, with one of them completing a full turnaround from earlier in the series, getting a really nice hurrah moment and properly giving Belle what is an admittedly small group of friends within the castle. On the other side, there’s also a couple of funny moments as Madame La Médium continues her manipulation of the royal court, while it’s eager to poke fun at the fact one rather faceless character who has been around since the first volume finally has a chance to shine.

Despite it being one of the more fascinating volumes in the series it’s still not quite perfect, and I’ve never really gelled with the narrative style of chopping and changing between two different viewpoints which it still does here. However we’re getting to the point where these two pieces of the narrative are merging into one, so we’ll probably see at least a lot less of this in the final volume.

In addition, some of the transitions between different plot points can feel rather sudden as the story moves into the endgame, and it does feel as if there was either a little bit more to tell or a missing piece of connective tissue. That said, it does feel about right to bring the story to its climax, and I’d rather have a well-written shorter series rather than a longer one that is dragged out for no reason. It must also be said that Kaori Yuki was ill when writing this series, and I honestly think it’s a testament to her talent for her to be able to crank out something this good in the circumstances.

I still love the artwork for this series, which continues to particularly excel with its close-up character art, as well as its period details and costume design. In a series where one of its main themes is the perception of beauty, you do appreciate the level of detail that goes into not just the fancy dresses, but also the attention placed on physical flaws like burns or scars, so you get both ends of the picture.

Beauty and the Beast of Paradise Lost continues to be published by Kodansha both physically and digitally. Translation of this volume is handled by Rose Padgett and has no issues to note.

Overall, Volume 4 of Beauty and the Best of Paradise Lost is a fascinating read that grabs you with its mystery, intrigue, and dramatic developments as it marks itself out as a turning point in the story and we head towards the endgame. If you have enjoyed the series so far and have fallen in love with its characters, then picking this up is a no-brainer as it reveals a lot more about them and pushes them through a variety of twists and turns before we get to the final confrontation. While seeing a good series end always has a tinge of sadness, I personally can’t wait to dig into the final volume. 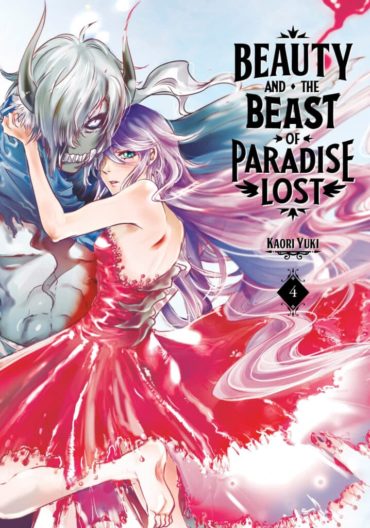 Title
Beauty and the Beast of Paradise Lost Volume 4