In this second volume of Kaori Yuki’s take on Beauty and the Beast, we see a story packed full of fascinating developments as it begins to unravel a lot of the mysteries that were set up in Volume 1.

The main objective with this volume is to show us exactly what is going on as it gives us the backstory for the current state of play, while giving our protagonist Belle something to fight for. While she has been employed as the Beast’s seamstress, she is very out of place here and she finds that she isn’t taken to kindly by the other residents of the castle, with most of them not wanting an outsider in their midst. Giselle, the Beast’s sister, makes a particular point of bullying her and, in an effort to see her expelled, lures her into the rose courtyard in the castle grounds that everyone but the Beast himself is forbidden to enter.

It’s here that she learns the Beast’s secret and the truth of the curse, as she sees the cursed Prince’s fiancée (funnily enough also called Belle), sitting seemingly frozen in time, slowly turning to crystal. The Beast reveals that the Kingdom’s Patroness, the old and wizened Madame La Médium, had fallen in love with him, and had unleashed the curse as a result of her jealousy against him when he announced his engagement to Belle. Having wandered the land for several hundred years, the now beastly Prince Cyril hunts both Madame La Médium and the monsters she creates with fragments of Belle’s crystal heart she stole, so he can bring his fiancée back to life and break the curse placed upon him and his subjects.

This main concept doesn’t really differ too much from the classic fairy tale, keeping the concept of the enchantress cursing the prince after he rejected her, yet it also builds in elements from other popular adaptations and adds something of its own too. While it could have potentially been more ambitious, I like that it keeps things simple and true to the original story, because as we have seen with other recent adaptations, such as Mamoru Hosoda’s Belle, changing the core concept doesn’t always quite work.

As well as setting up the backstory, there’s also plenty of character development, with a lot of the focus being placed on Belle as she makes a stand against the castle’s residents that want her to leave, as well as finding her resolve to help the Beast fight against Madame La Médium, whom she believes is the key to finding her mother, who may still be alive. I really like the depth that Kaori Yuki puts into her characters, as with Belle in particular she’s gradually showing more of those flashes of strength that we saw in the first volume, but is still quite vulnerable and naïve, whether that be falling for a man she now realises she can no longer have or jumping into difficult situations without looking first. Similarly, the rest of the cast are never as nice or nasty as they first appear, and there’s always something else going on behind their actions. I particularly loved how the Beast often reacts in outbursts of anger then cools down after stepping back as it keeps him as scary as his outward appearance but still exposes his human heart.

If I had to criticise anything though, it’s that it tries to pack too much into the number of pages available, with pacing that is inconsistent, and struggles to give certain concepts room to breathe. There’s a couple of big jumps in the plot that could have done with a more gradual build-up, while certain scenes could have been cut down or removed completely as they don’t really add too much to the story. This is felt particularly towards the end of this volume as it tries to bring Madame La Médium into play as the antagonist far too suddenly.

It’s a shame as I liked the way it was building up her character as a witch, explaining why she is stealing the faces of these beautiful young women and showing how she gets a kick out of meddling with the nobility, yet there’s nothing to really to show why she checks in with the Beast at all, other than morbid curiosity.

Despite this, I still think this is a fascinating tale and I like a lot of the elements that are introduced and built upon here, and it leaves plenty to be tackled in later volumes, including Belle’s mysterious rose-shaped birthmark and what that means about her heritage.

Kaori Yuki’s artwork remains one of the series’ greatest strengths though, as we continue to see well-drawn and expressive characters with creative designs. The costume design in this volume is very striking, particularly with the other Belle’s rose-embellished dress, which is utterly gorgeous and truly marks her out as a noble. Elsewhere it sticks to its French period setting and continues to pull it off well, both in the period dress and the architecture of areas of the castle such as the rose courtyard. Backgrounds could still do with a little more detail at times, but, as before, it has enough strength in its story and characters that it doesn’t need them quite so much.

The series is published by Kodansha and is available both digitally and physically. I’d personally still recommend grabbing the physical volumes if you can get hold of them due to their nice size and premium feel despite being a paperback. The series continues to be translated by Rose Padgett and this volume reads well with no issues to note.

Overall, Beauty and the Beast of Paradise Lost continues to be a fascinating and fresh take on the classic fairy tale, with this volume building nicely on the mysteries set up in the first while developing the main backstory. It’s just a shame it doesn’t quite nail the pacing and tries to jam too much in, as otherwise this is a very entertaining read. 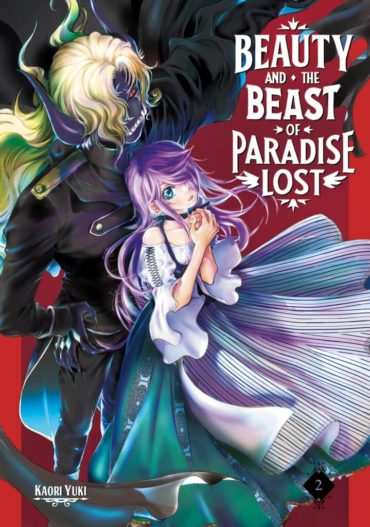 Title
Beauty and the Beast of Paradise Lost Volume 2