At the end of Volume 2 of Kaori Yuki’s thrilling and beautiful take on Beauty and the Beast, Madame La Médium issued her ultimatum and lured the Beast – Prince Cyril – back to the fallen kingdom of Issus where everything began, and is unknowingly followed by Belle, who really doesn’t know what she’s bumbling into. Continuing in this third volume, Belle comes across the witch (now posing as her mother) and is duped and eventually captured, due to her naivety. While our heroes win an initial standoff, La Médium uses her magic for a sneak attack and steals Belle’s face, turning her into an Idole. Can Prince Cyril save her before it is too late?

Beauty and the Beast of Paradise Lost has thrown up many mysteries and questions over its first couple of volumes, and this third volume really is the turning point where it answers quite a lot of them. If you’ve been wondering just how everything came about or were dying to know what was going on with Belle and her birthmark, then I think you’ll come away from this feeling pretty satisfied. However, at the same time, I can’t help but feel this is the most confusing book in the series so far, because in a lot of places it’s missing some connective tissue between important scenes and tends to jump around a lot.

This is an issue that was already present in the second volume, but it hurts this one a lot more as it is actively trying to explain things to you. A flashback scene at the start, for example, just comes out of nowhere, which, while it is an important part of the story as it finally shows us how everything started, is still sorely missing some finer details that could have made it flow better. One of these at least – Prince Cyril’s motivations for overthrowing his parents – we do find out later, but I still don’t understand how La Médium magically got her eyesight back, which is odd as it’s so important in getting across this volume’s message of showing how things like love, jealousy and being obsessed with beauty can drive you to do really stupid things. And this volume does tackle that topic really well, from Belle’s love for Cyril, despite him being in love with another woman, to the Queen’s jealousy against the King’s mistress, and even La Médium’s jealous feud against Cyril, I just think it needed its narrative pacing and arranging a bit better.

Despite that though, this volume does come across as the tensest and most action-packed in the series so far, as Belle really goes through the ringer here to the point you really doubt that she is going to survive. With her face stolen, she is effectively dead to the people of the Beast’s castle, yet Cyril frantically tries to find a way to revive her. Meanwhile as an Idole, Belle’s soul has been flung into Samhain, a kind of purgatory on the border between life and death where if she completely forgets everything from her life, there’s no coming back. Samhain itself is scary enough with a very bleak and desolate landscape filled with scraggly dead trees, but when you’ve got a black mass of abandoned faces called The Void hunting for you, things definitely turn up a notch.

These are great scenes as you get what is really the first big confrontation against the villain, filled with plenty of heroics from Cyril and a great show of defiance from Belle herself, however, the real star of the show here is Isolde, as the self-aware Idole gets what feels like more development than the main cast. As the story unravels, she comes across as that type of background helper character who is always there, unnoticed and unloved, but does her very best for everyone around her; and just seeing her transformation from that to a full-fledged member of the gang is very heart-warming indeed.

Kaori Yuki’s artwork here is still as strong as ever, and we get quite a few nice closeups in this one and some very cute-looking panels when Belle is pampering either Cyril or her newfound friend in Isolde. It’s also a bit more gruesome in places compared to the previous two volumes which expand more on the horrific side of its fairy tale origins, and, to give a warning for any arachnophobes out there, it does have quite a lot of spiders in it.

Beauty and the Beast of Paradise Lost continues to be published by Kodansha both physically and digitally. Translation of this volume is handled by Rose Padgett and has no issues to note.

Overall, Beauty and the Beast of Paradise Lost continues to be a strong series with this volume finally giving us most of the answers we have been begging for since Volume 1, bundled together with some very tense and action-packed scenes in which you find yourself doubting if the heroine is going to survive. It’s just a shame that pacing and narrative issues continue to affect the series, as this volume can be confusing at times when you’re trying to understand what it is trying to show you. 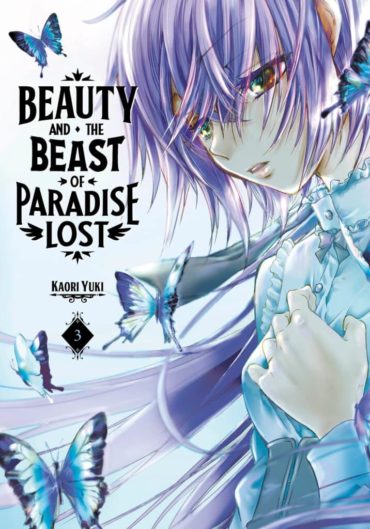 Title
Beauty and the Beast of Paradise Lost Volume 3