Best friends Takara Takarada and Yuujin Kamoshima are trying to make a living as actors. Takara: unworldly, hopelessly disorganized yet effortlessly charismatic, is almost totally dependent on Yuujin who acts as his unofficial mentor. Even though Takara has now been ‘discovered’ and signed by an agency, he’s still far from in demand. When the two audition for a new film Transience, to be directed by famous director Souichi Kurozu, it’s Takara who is given a role, leaving Yuujin volunteering to cover for him by taking several roles in the upcoming production of Chekov’s The Three Sisters at the little theatre company where they first met (until Takara can step in at the last moment).

Takara, plunged into the intense world of a Kurozu production, is all at sea. He doesn’t even recognize the pretty young idol/actress Aki Imagire that he’s playing opposite when they first meet. He hasn’t the social skills to handle the off-set interactions with the other cast members. As the filming gets underway, it soon becomes obvious that Yuujin’s view of Takara’s character conflicts with the director’s, leading to traumatic confrontations on set. “Make your friend go home,” Kurozu tells Takara. “I don’t want to fight with a shadow.”

The odd but enduring friendship between the two actors is the central focus of Double and it’s portrayed by delving into the ways that Yuujin and Takara approach the art of acting. Takara has learned everything he knows about the craft from Yuujin, from breath control to the way to deconstruct/analyze the role he’s playing and bring it to life. Takara can’t function without Yuujin – so when Kurozu, incandescent with rage, demands that he forget everything Yuujin has taught him about the character he’s playing in Transience, he reduces Takara to tears in front of the cast. This infuriates Takara’s agent Ms. Tsumeta and we’re left wondering how Takara can continue, faced with such an absolute command. The showdown between director and actor is terrifyingly depicted by the mangaka; Kurozu’s rage is drawn in almost animalistic terms, bared teeth, glaring, protruding eyes burning into Takara’s as he looms aggressively over him. Noda’s art is just as compelling as in the first volume, if not more so, especially when Kurozu is confronting Takara on set. The close-ups are particularly striking: Takara’s crying face is far from pretty but its realism conveys far more than a more romantic drawing might have done. If some of the encounters in Takara’s acting career were depicted in a raw and lifelike way by Ayako Noda in the first book of Double, here the mangaka turns the volume up to eleven. But then we’re shown an utterly different approach to the art of acting when Aki Imagire is asked to deliver a line by Kurozu in three different ways and demonstrates her versatility – a skill she’s had to learn to survive in the music industry.

As to how well Yuujin can function without Takara, deep down, he’s very much aware that he’s living vicariously in being Svengali to Takara’s Trilby. He’s rehearsing two roles in The Three Sisters, Captain Solyony (for the absent Takara) and Andrei Prozorov – and the differences between the little theatre company and the method acting encouraged by Kurozu at the film set are VERY revealing. Just how manipulative is the famous director? Just how far will he push his actors to get the desired results? Will Takara bend or break under this much pressure? And what will become of Yuujin?

There’s a short and light-hearted bonus chapter at the end: Act Five, Scene Two but no other extras or translation notes; anything that might not be familiar to Western readers is dealt with as it occurs in the text, for example, explaining in a footnote what traditional New Year’s beverage Amazake is made from. Translator Massiel Gutierrez ably delivers the dialogue that fairly sizzles with tension in the scenes on-set.

Double is currently available as an e-book; the print version will be published by Tokyopop on March 22nd 2022, with the digital version of Volume 3 due in early 2022.

The second volume of Double confirms that this is a unique and mature exploration of the insecure world of acting with fascinating glimpses of life on a film set seen from the actors’ point of view. Tokyopop are to be applauded for bringing us a seinen series that makes for compelling reading through believable and flawed characters trying to stay true to their art. 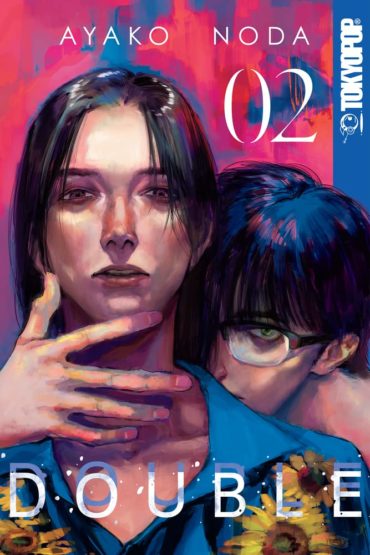