“I feel like now I finally put some distance between me and Takara.” Yuujin Kamoshima, musing about his friendship with Takara Takarada. “The relationship we’ve had until now wasn’t normal.”

Charismatic young actor Takara Takarada has been undergoing a baptism of fire in his first major role in the film Transience. Up till now he’s been almost totally reliant on his friend and fellow actor Yuujin Kamoshima, who has coached him in all his acting parts and organized his everyday life (they live in the same apartment block). But with Ms Tsumeta of the Flat agency representing him, Takara’s acting career is taking off. Or is it? He’s still so unworldly and disorganized that he seems utterly unable to cope with everyday life. A major clash on-set with the film’s director hasn’t helped, either. In the meantime, the little theatre company that both Takara and Yuujin belong to is about to stage a new production.

Do relationships in the film crew and cast subtly alter after they go to see Takara playing Solyony on-stage in Chekov’s The Three Sisters? Certainly, it leads to director Kurozu offering him a prestigious commercial – which in turn leads to him becoming instantly recognized with the inevitable repercussions. With newly-found fame come other problems: Takara and idol-turned-actress Mika are spotted on a kind-of date together (they seem to be growing closer to each other, but that might be just because, as only children, they can easily empathize with each other) – and then a strange masked stalker turns up in Yuujin and Takara’s apartment building. It’s time for Takara to move – and although Yuujin helps him with the removals, he doesn’t go too. As the two men adjust to this new way of living, Ms Tsumeta tries to talk Takara into accepting a prestigious new role in a romantic comedy series (he’s not keen) but Ms Tsumeta assures him that, “A story doesn’t have to be complicated for the audience to enjoy it.”

Then Takara loses his voice. Or, more accurately, he’s unable to speak. The doctor calls it ‘psychogenic aphonia’, going on to explain that this is a voice disorder that “…can often occur due to overwork, stress, lack of sleep.” And Takara has hardly been sleeping more than a few hours every night. Suddenly his life and his budding acting career are on hold. What will become of him now?

Even though this manga is called Double and the first two volumes have revolved around the strange, almost symbiotic relationship that unites Yuujin and Takara, with Yuujin living vicariously through Takara the acting career that he hasn’t been able to achieve for himself – Volume 3 focuses on Takara. And when Takara is forced to move out of the shared apartment building to his own flat, it seems that perhaps this relationship is becoming less significant in his life. Yet some of the most interesting pages (for theatre lovers) are the ones showing the final rehearsals of The Three Sisters, then letting us share Takara’s thoughts as he ‘becomes’ Solyony on-stage; a remarkable transition, skilfully portrayed by the mangaka.

Noda’s drawings have an almost tangible physicality; where some mangaka tend to develop a personal style that’s very distinctive but unmistakably manga (Shungiku Nakamura for example in Junjo Romantica, or Asumiko Nakamura) she often gives the impression of sketching directly from real life. She’s especially good at drawing hair: stubbled chins; hairy legs; Takara’s soft and wayward fringe; Yuujin’s wild, swept-back style that often looks as if he’s been agitatedly raking his fingers through it.

We also get to learn more about the self-controlled yet supportive theatrical agent, Ms Tsumeta, when Takara asks her if she used to act because she understands so well the scripts that she records for him to learn, just as Yuujin used to. This scene – and the little glimpse into Ms. Tsumeta’s past – is not followed through and at this stage it feels like too much and yet too little. It would be fascinating to learn more about Takara’s cool and capable agent but from a story balance point of view, it’s just not quite the right time.

Translation for the third volume of Double has been ably handled again by Massiel Gutierrez for TOKYOPOP.

Even though these chapters are crammed full of events as we watch Takara’s struggles to adjust to the major developments in his life, this feels like a transitional volume – and it’s not until the final image that we sense that something has changed. It’ll be a wait, though, until the fourth volume (due out in summer 2022) to discover exactly what that is and how it will impact everyone close to Takara – including Yuujin.

Double won an Excellence Award from the 23rd Japan Media Arts Festival in 2020. 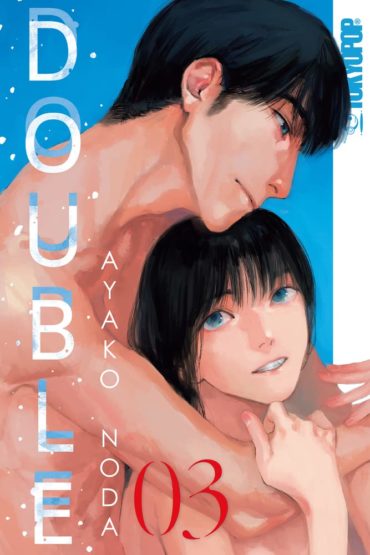