Seventeen-year-old Suzu Naito used to love singing and writing songs, especially with her mother, but when her mum dies tragically trying to save another child from drowning, Suzu feels unable to sing, her grief overtaking her day-to-day life. One day, however, she’s introduced to U, a very popular virtual world, where everyone can create an avatar that not only brings out the person’s inner strengths, but also allows them to become something that they’re not in the real world. Suzu creates the avatar ‘Belle’ and through the avatar, she feels she can finally sing again and let go of her grief temporarily. Belle becomes an internet sensation, but one concert of hers is interrupted by the mysterious Dragon, a beast who is accused of ruining the peace of U. Suzu however feels drawn to him, and it’s their budding relationship that not only threatens the world of U as they know it, but Suzu’s real world too.

If it’s not obvious from the marketing, the trailers, or even the name ‘Belle’ meaning ‘Beauty’ in French, but also the name of a certain Disney Princess, BELLE is a ‘Beauty and the Beast’ type of story, re-imagined through the mind of Mamoru Hosoda. According to the director’s note, provided in the Cannes Festival booklet given out for its screening, BELLE was a film he always dreamed of creating, and finally felt able to do so, thanks to the success of his previous films. If you’ve been following his filmography thus far, the film does feel like a continuation of his previous works in certain parts; the world of U could comfortably sit next to the world of OZ from Summer Wars, the Dragon design looks like a member of the Beast Kingdom from The Boy and The Beast, and Mamoru Hosoda’s earliest work The Girl Who Leapt Through Time already explored themes of adolescence and love, just like BELLE. But this isn’t a case of a director retracing his steps to recapture the magic of his previous work, but more learning from his past and bringing together his greatest strengths into one new film, just as Suzu does with her avatar.

BELLE is a twist on the ‘Beauty and the Beast’ story but for a modern age, a deconstruction for a new generation. Not in the sense of shallow commentary on how fairy tales don’t have the same impact as they did before, but in a way that flips the script and expectation of the viewer. Everyone knows the story: a Prince is turned into a Beast and must find true love to break his curse, a beautiful girl comes along and through one way or another is forced into his castle and the pair, together, find his inner beauty for her to fall in love with and turn the Beast back into a man. The story is all about finding one’s inner beauty, and showing empathy to those different from you, but mostly when it comes to romantic love. And this is where BELLE flips it; the film plays with your expectations for the longest time, not just with pre-knowledge of the tale but also in how the movie plays out, with Belle and Dragon growing closer, just as Suzu and her high school crush Shinobu start spending more time together. But the reveal is an unexpected gut punch, which I won’t dare spoil, but it does play out extremely well. Not in a way that the film tries to show off how clever it is for tricking you, but for how it makes sense leading up to that point, yet we’ve been too distracted with our preconceptions to notice.

Another thing that BELLE does that I really like is the concept of the heroine herself. In a typical ‘Beauty and the Beast’ tale, the ‘Beauty’ of the story is the good girl, the only one who can see through the male’s rough exterior to the heart of gold within. But here Mamoru Hosoda challenges conceptions, asking why is Beast the only one hiding behind a mask? The ‘Belle’ avatar is just as much (if not more so) of a curse as the Beast. Suzu logs in and becomes Belle; she has anonymity on U and can sing without having her grief overwhelm her, but it’s just a band-aid, it’s not going to fix the problems she has in her real world, and how is she supposed to help someone else going through mental struggles if she won’t even confront her own? Hiding is a crutch, regardless of what’s its used for, and it’s the film beautiful climax and overall message that will resonate with audiences and generations to come, especially those who are maybe tired of the same re-telling’s of fairy tales past.

But it’s not just the twist on ‘Beauty and the Beast’ that the director does so well here; Mamoru Hosoda has brilliantly brought the online world to life before in Summer Wars, but in BELLE it’s in a different way. Yes, you can create your own avatar and become an overnight sensation but that comes with its own caveat. As it’s on the internet, online abuse, hate comments and quick judgements on someone’s character that can change at a drop of a hat (or drop of an apology video in this context) are portrayed brutally in this movie. There are thousands upon thousands of text boxes on screen, but voices accompany them, constantly overlapping each other in a way that feels overwhelming, let alone what our internet stars must experience in real life. Suzu’s friend Hiroka is a very acerbic presence here, from saying things like Belle has ‘made it’ because she has positive AND negative comments, to the way she is instantly cynical of any video she watches from other characters in which they try to be authentic. It’s a reflection of how online spaces can get, and it’s excellently shown as both a natural progression of how we treat said spaces different from real life and it’s something that we can improve on.

As much as I ended up falling in love with the film over its run, and even more so as I write up this review, deconstructing all the elements of the film, I cannot say that I loved it from the first frame as there are a few issues that gave this film a rocky start. The pacing is one of them. The film has two openings, one within the world of U that thrusts the audience into the online world and has a bombastic opening number from our heroine, and the second opening from Suzu’s point of view, which is much quieter and takes us back in time to how she got into U in the first place. In hindsight, I do get what Mamoru Hosoda was going for: introducing both Belle and Suzu’s characters and the juxtaposition of real and online life does eventually balance itself out within the film. But the opening act suffers because of the pacing of Suzu going from knowing U to jumping back in time to a long no-dialogue flashback of her relationship with her mum and then discovering U. It felt like the director suddenly hit the brakes after going 100 mph for the Belle/U opening. This isn’t helped by the inconsistent rules of U itself. On one hand, it doesn’t really matter as the rules of U sort-of play on guidelines we can find across different social networks and some fairy tale logic, however the Beast himself has his own space, a castle that’s invisible to the higher-up users of the platform and he also has AI little helpers. Both are things we don’t see anyone else doing. I was half-expecting for the reveal to be that the Beast was an admin user or someone who had special access, but that isn’t the case, and we never get an explanation as to why the Beast has them either. Also, just to throw it out there, if you’re not into musicals or song-heavy movies overall, then you might find BELLE hard to sit through as music is the very soul of this movie.

Animation is provided by Studio Chizu, Mamoru Hosoda’s own company who have animated his films since Wolf Children. The 2D animation is what we’ve come to expect from Hosoda’s work, with very familiar character designs and simple Japanese town life in the background, and the world of U is fully in 3D, which is a blend that Mamoru Hosoda did in Summer Wars as well. Despite the familiarity however, it’s still a very beautiful movie. I was especially taken aback by how every facial microexpression is wonderfully rendered on Belle herself, and U has many eclectic avatar designs, so the world does feel unique. The score is provided by a variety of talents: Taisei Iwasaki, Ludvig Forssell, Yuta Bandoh and Miho Sakai who all do a great job, with the standout being the voice of Belle – Kaho Nakamura – who gives the breadth of emotion that the films needs. Her voice sounds like a cross between Mai Fujisawa and Aoi Teshima, but she hits it out of the park, and I look forward to hearing how the English dub cast handles all the songs, especially the one at the climax.

Mamoru Hosoda’s BELLE is a beautiful movie: visually, audibly and in its message about online spaces and healing through one’s trauma. The exceptional re-telling of the ‘Beauty and the Beast’ story, whilst also standing up on its own without that context, is an experience you shouldn’t miss.

BELLE is in UK cinemas 4th February by Anime Limited; for full list of cinemas and to purchase tickets, click here. 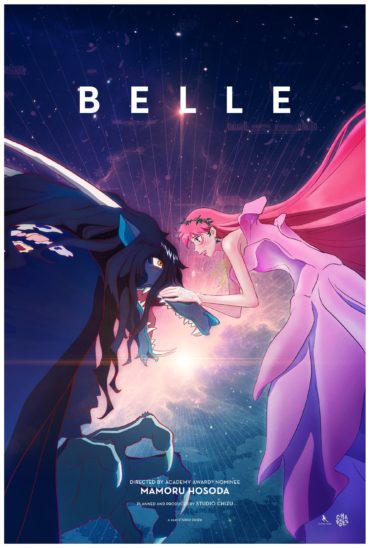