Some of you reading this may be familiar with the name Yasuhiro Yoshiura as being the creator and director behind Time of Eve and Patema Inverted. Now he returns with the new film Sing a Bit of Harmony, but does it prove as interesting viewing as his other works? Let’s find out!

Our story takes place in a slightly more futuristic world where the use of AI and robots are part of everyday life. Protagonist Satomi is used to living in a world surrounded by AI helpers, thanks to her mother being a talented AI developer – but little does she know that the company her mother works for is about to embark on a groundbreaking project that Satomi will end up wrapped up in. 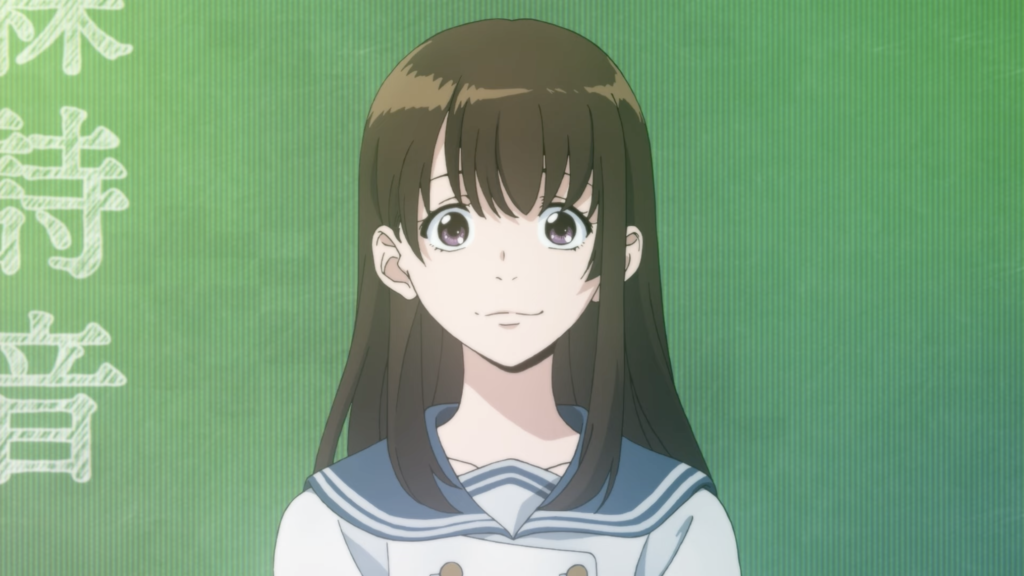 The top-secret project involves creating an AI that can behave exactly like a human, which the company think they have accomplished. However, it just needs to be put through one final test before the project can be shown to the higher-ups. The final test sees this AI, called Shion, being enrolled into Satomi’s school for a week where the creators hope she will be able to fool the students and teachers into believing she’s truly human.

Things start out well until Shion lays eyes upon Satomi and then dashes over, asking if she’s happy. Having sneaked a peek at her mother’s work schedule, Satomi quickly realises that Shion is the AI they’ve been working on and tries to cover for Shion by pretending they were once friends. Of course, that’s not the last of Shion’s mishaps and the first day isn’t even over before her true identity is revealed to some of Satomi’s classmates, whom she hastily swears to secrecy to protect her mother’s job. 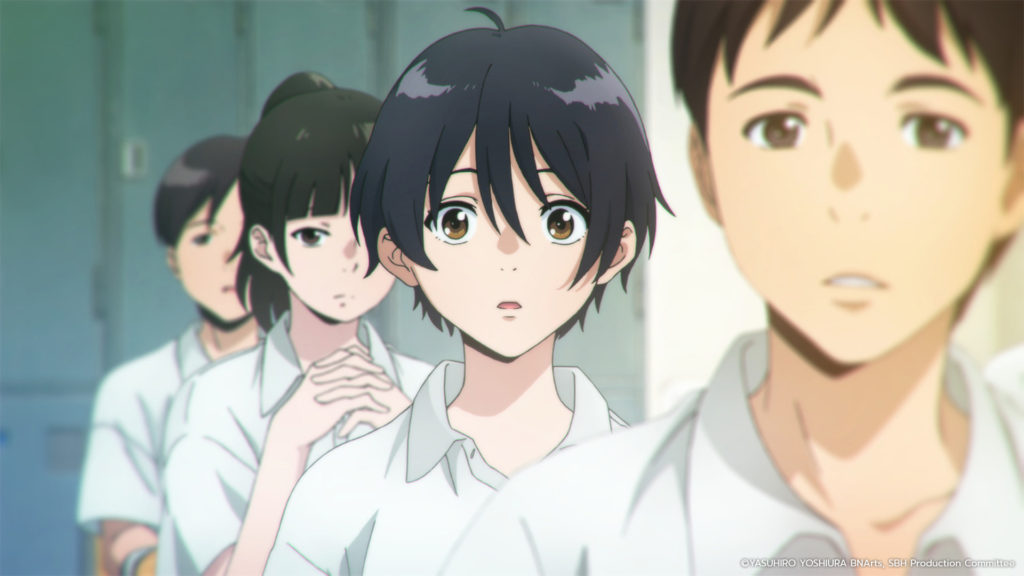 Satomi is a bit of a loner at school; she’s known for being a ‘tattletale’ and because of that everyone stays clear of her. She shares a class with sort-of friends Aya and Gotchan, plus her childhood friend Toma also attends the school, but despite this, she keeps her distance from everyone. That is until Shion arrives and the group begin to bond over knowing and wishing to protect Shion’s secret.

While Shion manages to pass as human most of the time, she also tends to break into song and do other weird things that drive Satomi to despair. The AI simply wishes for Satomi’s happiness (for reasons revealed toward the end of the film), so she’ll do whatever it takes to accomplish that. Even if it means finding a ‘prince’ for Satomi, like in her favourite film which viewers will quickly recognise for being similar to Frozen which explains some of Shion’s more peculiar habits. 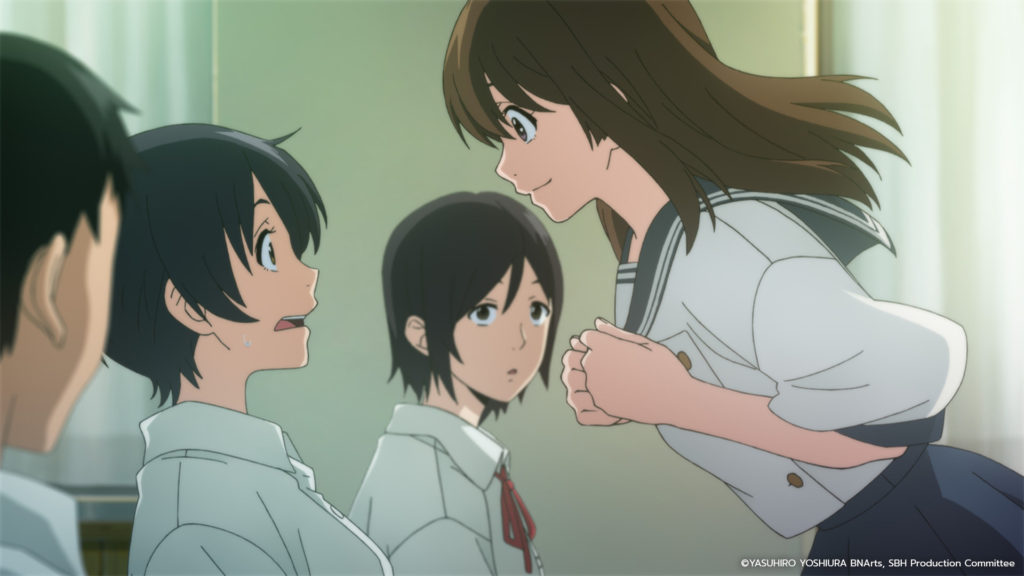 While Time of Eve felt like it wanted to make a statement about the future of AI and robotics, Sing a Bit of Harmony is more rooted in being a high school drama. While it is trying to explore the future of AI and how we view them (as well as sexism in the tech industry), it largely focuses on the relationship between Shion and Satomi as the former tries desperately to make the latter happy. Just her presence and bringing all the kids together again as friends achieve that, but Shion doesn’t really comprehend what happiness is well enough to understand the benefit this is bringing to Satomi. She simply sees happiness as someone smiling without thought as to what goes on underneath the visible expressions.

The film won the Audience Award at Scotland Loves Anime last year and having now watched the film for myself, it’s easy to see why! The plot is busy with a lot going on, but it manages to accomplish what it sets out to do with fun and flourish. I wouldn’t say it does anything original, but that doesn’t matter provided it’s entertaining – which it is. 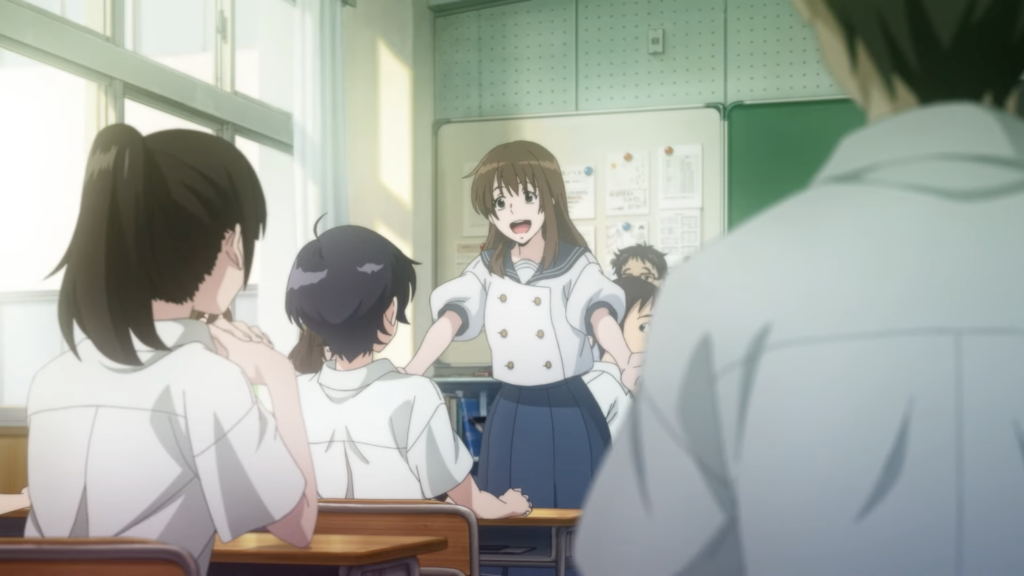 The one thing that is likely to disappoint viewers is that some of the AI elements do get a bit silly as the story goes on and I’m not sure it ties it off realistically or satisfyingly if you put much thought into it. Although it has to be said that the film doesn’t give the impression of taking itself all that seriously, so any lingering doubts about the subplots are sure to fade away quite quickly for prospective viewers.

Sing a Bit of Harmony has been created as a joint project between Funimation and animation studio J.C Staff (Food Wars, The Pet Girl of Sakurasou, Toradora!). The studio is known for being one of the best when it comes to high school drama series and their expertise in the field certainly comes through here. The movie is vibrant to look at, with familiar but interesting character designs for the cast by mangaka Kanna Kii (Umibe no Etranger). I especially enjoyed seeing the contrast between the quiet and reserved Satomi and outgoing Shion, which comes through well in their day-to-day interactions and movements. I also like how they captured the futuristic elements of the world and the music, which are flashy but not too over the top. 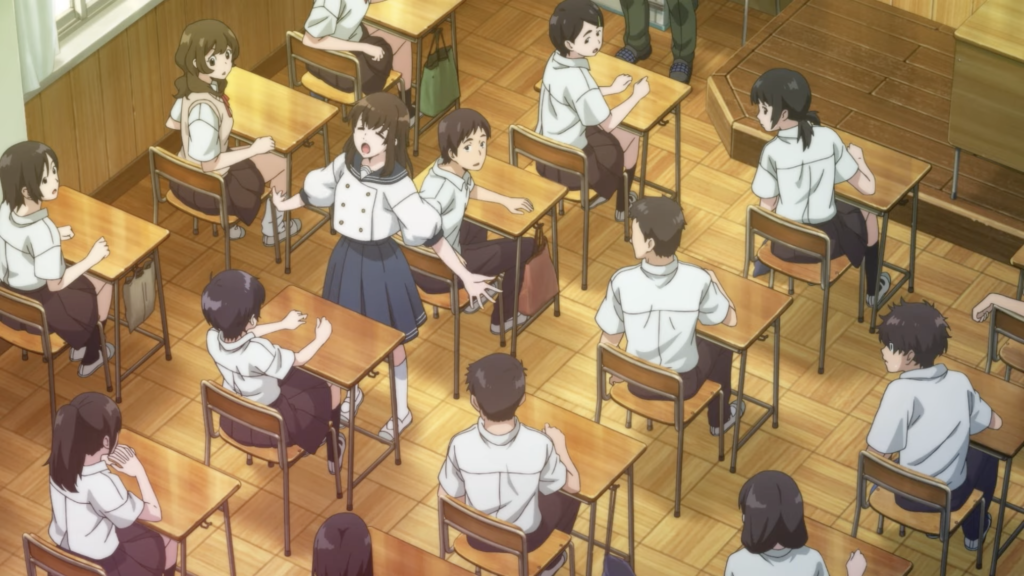 Music for the film has been handled by Ryo Takahashi (ACCA, SK8 The Infinite, Skate-Leading Stars) and there is a lot of variety on offer here. The compositions range from gentle flute-led background tracks to bigger full orchestra sounds for the musical numbers and dramatic moments. It’s a memorable collection of music and will have you seeking out the soundtrack for your collection afterwards.

While the cinema release for Sing a Bit of Harmony is available both with Japanese audio and English subtitles and English dubbed, I got to sample the English dub. For the most part, I found it to be a mixed bag. Satomi is played by Risa Mei (Cilia in By the Grace of the Gods, Igarashi Futaba in My Senpai is Annoying) and her performance is great, capturing the quiet personality of the character well. However, Shion is played by Megan Shipman (Sasha in Attack on Titan, Aries Spring in Astra Lost in Space) and compared to what I’ve seen of the Japanese samples, Shipman gives Shion too much of an artificial voice. Yes, she’s supposed to be an AI but she’s also supposed to be able to pass as a human, so I don’t find Shipman’s take all that convincing in that respect.

Another issue is that Toma, who is played by Jordan Dash Cruz (Moguo Ijima in Talentless Nana, Ryo Hoshino in The Millionaire Detective) just sounds far too old to be a high school student, which is distracting when Toma ends up being a big part of the story later on. However, I do appreciate that Funimation went to the effort of dubbing all the musical elements as well and the dubbed songs do sound good. I don’t think I’d recommend the dub to anyone, but if you prefer your anime that way, it’s certainly not a terrible dub, just flawed in places.

Overall, Sing a Bit of a Harmony is a highly entertaining film following the hijinks of an AI who is trying to pass for human and a group of high school friends. Although not every element of the plot is as fleshed out as it could be, nor is it particularly unique, it is a lot of fun and is sure to delight with its energetic and lovable cast of characters. 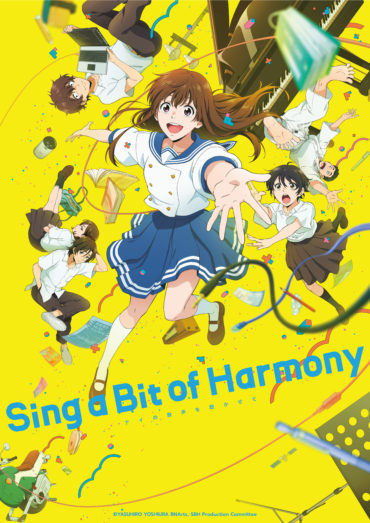 Title
Sing a Bit of Harmony

Gonna Be The Twintail! Review

Souji is an ordinary highschool student with an extraordinary love: Twintails. At school, he can think of nothing other than twintails, even going so far as to start his own club totally dedicated to the hairstyle. However, one day, a perverted alien force descends upon Earth with the intention of stealing everyone’s attribute, or spirit … Continued