Have Ashaf and Guideau overreached themselves in the world of the vampires in their search for the witch Angela? Have they been outmanoeuvred by their contacts, disgraced vampire noble Dunward and his mage Oscar?

The complex social codes of vampire society (where vampires prefer to dress all in black but sometimes wear white to ‘better interact’ with their human neighbours) are revealed to Ashaf and Guideau when they attend a formal white tie dinner hosted by ‘the Bridge’. He, unlike his elder brother Dunward, has not fallen from grace and is their only hope of gaining an audience with the Queen of the Night. Unfortunately for Guideau and Ashaf, the blood of a witch – Guideau (even though, strictly speaking, she isn’t a witch, she’s the bearer of a witch’s curse) – is the most desirable, delectable food a vampire can hope to taste. And the Bridge has a reputation for enjoying human flesh as well as blood. So, attending this dinner is walking into the lion’s maw and even though they suspect treachery, it arrives in an unexpected way, placing them in mortal danger.

Guideau, whose senses are highly tuned, observes aloud that the food at the formal dinner is not poisoned, causing some amusement to her menacing host. But even her beast-like abilities are not enough to protect her and Ashaf from the trap that they’ve been lured into.

Vampires. Beautiful but dangerous. And, as it turns out for Ashaf and Guideau, utterly untrustworthy on their home territory of Orlencia Sett. Running throughout this volume like a dark, repetitive melody is the question: “Is the queen a vampire witch?” even though the visitors have constantly been assured that she is pure vampire.

The chapters in Volume 6 in which Kousuke Satake took a little too long setting up the land of the vampires ‘four levels down’ resulted in the story spinning its wheels. However, here the mangaka changes up into top gear and puts their foot on the accelerator pedal. The oppressive darkness of the vampire world into which the mage and the woman/beast have boldly – or rashly – ventured conceals all manner of grisly practices. In past volumes, Satake has resorted to pages, even double-page spreads of action scenes in which there’s no dialogue and only sound effects remain. These chapters are no different. It’s still a little difficult to tell what’s going on in some sequences and it’s not always clear in a fight who’s done what to whom, let alone how. Nevertheless, there’s a noticeable improvement in visual storytelling with some dramatically striking imagery. When Guideau makes a bid for freedom, Satake produces some stunning panels which will remain in the reader’s mind long after they’ve finished the volume. Whether it’s close-ups of the features of the protagonists locked in a battle of wills (eyes, lips, teeth)- or glimpses of looming gothic architecture as a journey is undertaken, the tense atmosphere is very convincingly conveyed.

Seven volumes in, there’s still a major absence in this dark fantasy manga: a sympathetic character we can identify with. Guideau’s predicament is still shrouded in mystery; we don’t know who she used to be before the witch Angela cursed her or what kind of person she was. Ashaf is still a cypher. His one redeeming quality is that he – for reasons that haven’t been explained – stays by Guideau’s side and does all he can to protect her. Is he man or machine? (There’s a reason for this question, as you’ll find if you read these chapters.)

A manga doesn’t need sympathetic characters to succeed, of course, but after seven volumes, some details as to what makes the Guideau/Ashaf partnership tick and a few more hints as to their backstories wouldn’t go amiss. It feels as if Satake favours smoke and mirrors over developing his characters – and it needs writing experience and skill to do both at the same time. That said, he succeeds in creating a believable vampire society which exudes its own undeniably stylish yet blood-drenched glamour.

However, there is a single page with some elusive clues to the over-arching plot of the series. The clues are words that Guideau half-hears in a drugged dream. They seem to be a conversation between two people, caught in a desperate predicament. “That again,” she says as she wakes. She’s had the dream before. But she has no idea what the words mean. It leads her to ask Ashaf again what he intended when he said he would teach her what ‘love’ means. Is Ashaf waiting for her to understand for herself… or even to remember?

The Witch and the Beast is still compulsively readable and that’s also thanks to Kevin Gifford’s fluent translation for Kodansha. Volume 8 is due out in February 2022, so we won’t have long to find out if Ashaf and Guideau have been outmanoeuvred once and for all by the fearsome Queen of the Night. 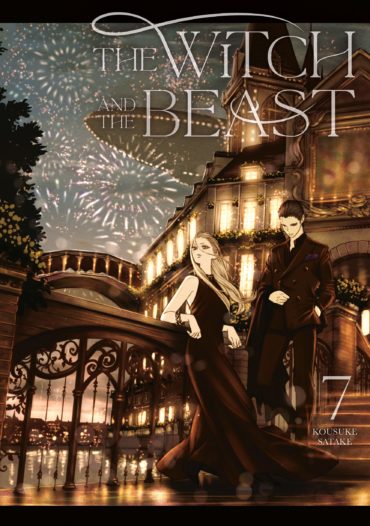 Title
The Witch and the Beast Volume 7