Why do they have to shuffle around the classes? It’s hell on shy people. And they do it every year.

Quiet, unassuming Yuki Matsumiya really dislikes the disruption when the students are put into different classes at the start of the new high school year. He’d rather just fade into the background than have to get to know new classmates. So, when an outgoing and charismatic student, Hayato Izumida, starts up a conversation with him at the drinks machine, he doesn’t expect him to pay him any attention again – until next morning when Hayato greets him as warmly as he greets his other friends. Soon, thanks to Hayato’s friendly nature, they’re eating lunch together and chatting away quite naturally. Hanging out together one weekend, they run into a couple of the girls in their class. One of them quietly asks Yuki to leave and let her friend spend time alone with Hayato as she has a crush on him. Yuki agrees – but this leads to a major misunderstanding between the two friends and much heart-searching for Yuki. Only now does he realize how much he’s come to like Hayato. Has he thrown away something that’s really important to him in his earnest desire to be a good friend? And is friendship the right way to describe what’s developed between him and Hayato – or is it something deeper?

“When’s the right time to make a move?” Hayato – conflicted as to how to progress the relationship without scaring Yuki off.

There are more than a few good contemporary BL manga set in high school currently available in translation: Sasaki and Miyano; Hitorijime, My Hero; I Cannot Reach You. Not to be outdone, TOKYOPOP has already brought us several titles in their Love x Love list that have set a very high bar: Tohru Tagara’s Koimonogatari: Love Stories and Gorou Kambe’s Like Two Peas in a Pod are especially well written and drawn with great subtlety and observation, while keeping an ‘OT’ rating by not offering any explicit scenes. Tomorrow, Make Me Yours, however, has earned itself a ‘M’ for Mature rating which establishes something of a dilemma when it comes to assessing exactly who this story is aimed at. The relative simplicity of the plot, the dialogue and the age of the protagonists all suggest that this story is aimed at younger teenaged readers. And for a good ninety percent of Tomorrow, Make Me Yours, first-time mangaka Kaoruko Miyama (this is her first published manga, she tells us in the afterword) delivers a high school romance that, while hitting very familiar and predictable story beats and situations, is sweetly and simply done, with a great deal of blushing on the part of both protagonists. Many readers will sympathize with Yuki’s dilemma as a shy and retiring student who finds it difficult to make friends at school – and his evident delight when, thanks to Hayato, he becomes one of the gang. The character design is nice although not very distinctive; the mangaka is, nevertheless, good at conveying the feelings of her characters through their facial expressions, especially Hayato. However, the story would have worked just as well, I think, if she had not offered us a first-time sex scene that seems tacked on rather than fully earned. (So convenient that Yuki is home alone much of the time with single-parent dad away on business!) It’s all to do with balance and the sudden swerve into sort-of explicit imagery (censored, of course) feels abrupt and imposed (maybe by the original magazine editor?). Compared with Deko-boko Sugar Days by Atsuko Yusen, where the ‘M’-rated encounters between two childhood friends evolve gradually and naturally as the story unfolds, this doesn’t effortlessly sweep the reader along.

That said, this manga has some convincing moments in which Hayato tries to work out how to get the strength of his feelings across to Yuki without scaring him off. These have an authentic tone which will resonate with anyone who’s attempting to negotiate the misunderstandings and heightened emotions of a first relationship.

Tomorrow, Make Me Yours is translated for TOKYOPOP by Christine Dashiell who gives us, as always, a fluent translation. It makes a pleasant but undemanding BL read – and is currently available as an e-book; the physical edition is due out in May 2022. 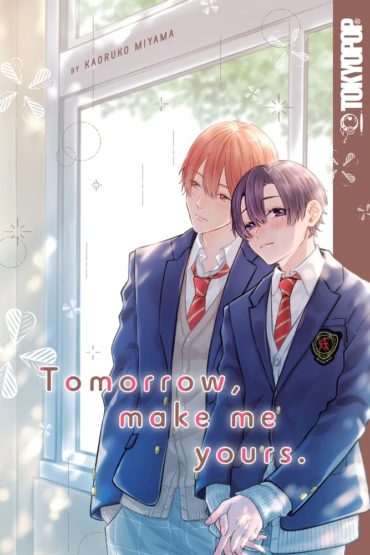 Title
Tomorrow, Make Me Yours

‘Espoir’ is French for ‘hope’. Is this a promising start for the new Yuri series from Tokyopop?