In a town far from anywhere, surrounded by walls that no one must go near, there live Haibane: young adults and children that are born from cocoons, with no memory of their lives before coming to this town, and grey-feathered wings on their backs. One Haibane, by the name of Rakka, emerges from her cocoon and befriends the Haibane already there, including one of the eldest, Reki. But as Rakka discovers more about the town, the more she discovers about herself and the mysterious past her friend Reki has been struggling with.

Haibane Renmei is a series I’ve been meaning to check out for a while; its striking artwork was passed around quite a lot in the early days of the internet and Western anime fandom in the early 2000s. Also, its creator, Yoshitoshi ABe, has been responsible for many other beloved anime such as Serial Experiments Lain and Welcome to the N.H.K. Haibane Renmei was not only his first original creation, having developed the dojinshi it’s based upon, but also the title often recommended to those interested in getting into his works, for being one of the easiest to follow from his experimental style. I admit I’ve yet to see any other of his works, and I’m glad I got to finally tick Haibane Renmei off my very long ‘anime to watch’ list, however it’s not a series I can whole-heartedly recommend. 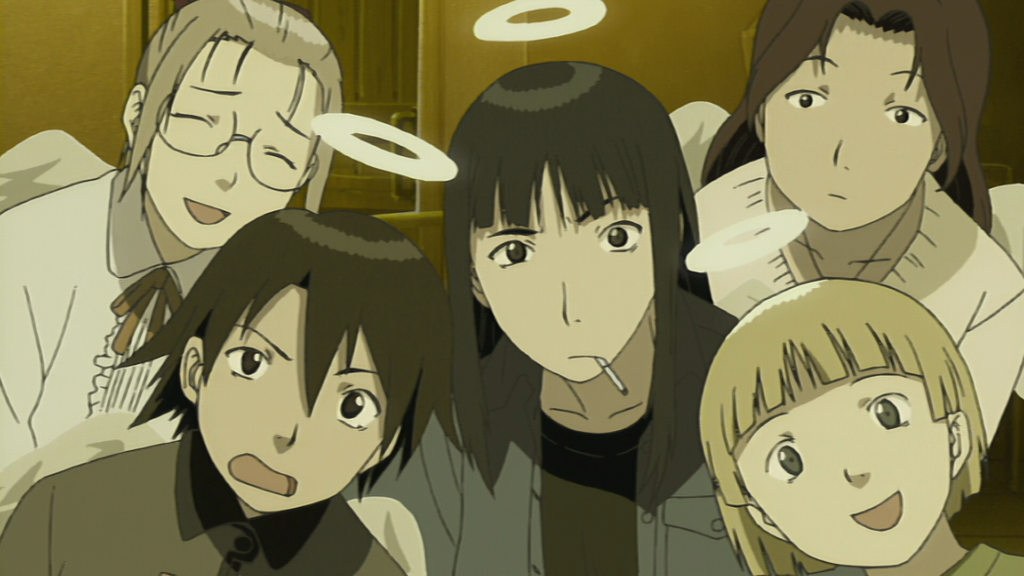 The series is only 13 episodes long, and it’s a slow moving, almost ‘slice of life’ tale of these mysterious angel-like beings. The opening episode is quite gripping, with the Haibane gently welcoming its new member (and the audience) to its unusual world and the scene where Rakka gets her wings is brutally and beautifully portrayed. But generally, the story has two modes; one is character studies for Rakka and Reki, the other is exploration of the mysterious town and its unusual history and rules, plus how it affects the other Haibane and humans that live there. The character arcs for the main two females are the strongest part of the series; the POV character is Rakka but as the series goes on, we lean more into Reki’s world, and discover that her long history with the town and her time as a Haibane has not always been positive. Anyone who has suffered from depression or loneliness will have a lot to identify with in Reki; her character is subtly revealed over time with small clues (such as her being the only one who smokes) and other hints of foreshadowing. Overall, it’s well done, and the conclusion to her arc is satisfying, but it comes at the cost of Rakka’s and, even more so, everyone else’s character development. By the last few episodes, we forget that the other Haibane are even there, and Rakka’s emotional struggles are hastily moved on from to give Reki the last push her character needs before the finale.

The other side of the show is the world building, and the many mysteries the town and its history provides. It should be said, that the original dojinshi and the anime’s story are unfinished; Yoshitoshi ABe has gone on record to say that he purposely left many things unexplained to allow for the audience’s personal interpretation. However, I believe there’s a difference between ‘allowing room for audience interpretation’ and ‘being unsatisfyingly vague’ and sadly Haibane Renmei falls into the latter for me. The series spends a lot of the time in the first half of the series explaining its world: how the Haibane are not allowed to touch the walls or even talk to certain people within the town, and how no one knows truly what’s outside the town, despite having people coming in and out for trading purposes. All of which, understandably, raises a lot of questions from us and the main character, who of course is interested in knowing what’s going on, as well as her own past. It’s not just her; a few other Haibane and humans over the course of the series ask questions as well. So, what I’m asking is, if the questions that the series raises are not meant to be answered, then why are there multiple characters asking them? If they care about the lack of knowledge they have, then by extension the audience is meant to as well. An argument can be made for the nature of ‘faith’ in this series; that one must simply ‘believe’ in a higher power and that things will work out in the end, without knowing what’s on the other side. A part of me understands that, however, overall, the ending doesn’t feel like a satisfying conclusion to the whole series. It plays more like the ending of a first volume of a long series; giving an emotional conclusion (Reki’s character) to provide an end point for Volume 1, but leaving enough questions open: the world itself, the Haibane left behind to pick up from in the next volume. But sadly, the rest of this story has yet to surface, and I doubt it ever will.

The animation is provided by Radix Ace Entertainment, who have been defunct since 2006 but have animated a few series from the Sakura Wars OVAs to BakeGyamon being their last animated series. I’ve yet to see their other projects admittedly, and I do not have the DVD of this series to confirm this, but this release doesn’t exactly impress when it comes to the Blu-ray side of things. The animation quality is already a bit all over the place; the opening and last episode have some very powerful imagery, and the town itself is beautifully designed with many backgrounds looking luscious, but in-between you have many static character movements, inconsistent facial animations, and it looks like all they’ve done is simply up-res the original DVD release, so many shots look blurry. It’s not helped that many of the on-disc extras, such as interviews with the creators and the ‘special ending’ (basically credits with artwork behind it) were included in the DVD release, according to Ian’s review from 2016. The only unique extra here, is the special edition coming with hardback artbox and artcards, so unless you’re a massive fan of this series, or have never owned it before, it’s not worth upgrading your previous DVD for it. 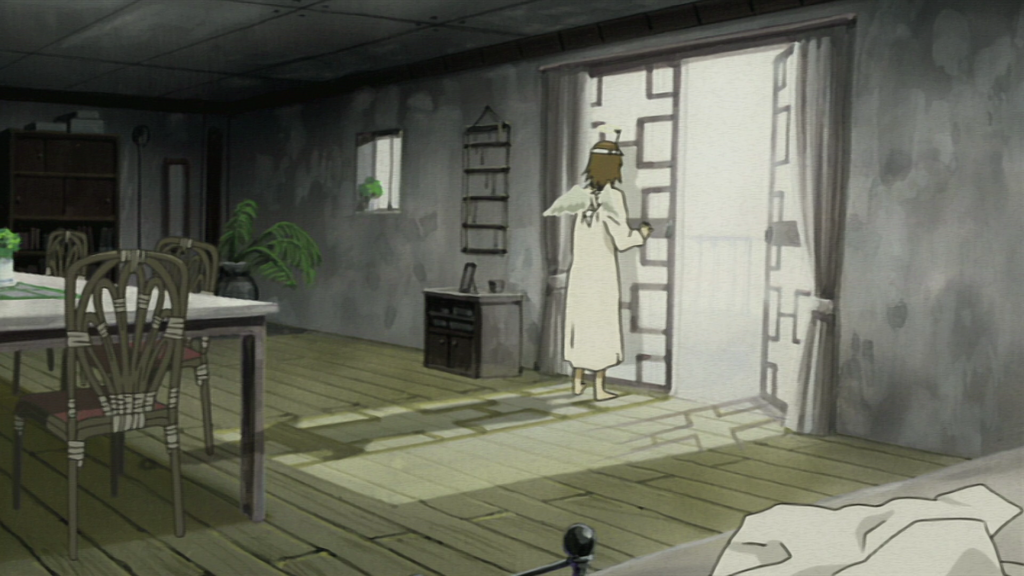 Audio-wise it fares much better; the English dub cast members, with many well-known names such as Wendee Lee and Stephanie Sheh, are all fine if a little stiff sometimes, but considering the elegance and mystery of the source material, I’m putting that down to direction rather than performance. Music is provided by Kou Otani, who has scored many series over his long career including the second season of Gunslinger Girl and the video game Shadow of the Colossus, so he fits right at home here.

Haibane Renmei is a unique series, with its surreal, unique world and relatable characters, but I personally couldn’t get over the inconclusiveness of the story as a whole. I can see why people are drawn to this story, but it’s just not for me. If you dislike unfinished series, then this isn’t the one for you. But if you want something completely different from today’s anime landscape, then check out the recent Blu-ray release. 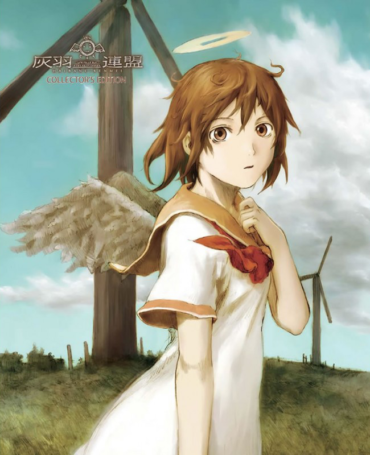 “In a Thursday blog entry, manga creator and character designer Yoshitoshi ABe (Serial Experiments Lain, Haibane Renmei) confirmed reports from last month’s Sakura-Con 2009 event that he is developing a new anime with many of the staffers of the Lain anime, but made a clarification on the title. The correct title for the project is … Continued

Artist Yoshitoshi ABe has published his latest dōjinshi manga (self-published comic, 53 pages in length) on iTunes in both Japanese and English. You will need an Apple iPhone or Apple iPod Touch to view this manga, but this marks one of the first times a Japanese dōjinshi artist has used the internet to publish his … Continued

A moment of stillness: the appeal of iyashikei

After being lured into anime fandom through hard-edged science fiction and edge-of-your-seat action-fests I’ve always wondered how exactly I started to gravitate towards the whimsical drama and slice-of-life drama; my DVD collection and watch lists have taken on a split personality of sorts with the gritty thrillers and cyberpunk on one hand and mellow realistic … Continued