This review will contain spoilers for the first two Heaven’s Feel movies.

Shirou Emiya arrives too late to save Sakura Matou who has now been possessed by the shadow and become a much darker version of herself; consumed with All the World’s Evils and willing to kill anyone in the way of her completing the Holy Grail. Despite the insurmountable odds however, Shirou isn’t willing to give up, he aims to save the woman he loves, even at the cost of his own life. But with the help of Sakura’s sister Rin, Illya and Rider, will their combined power be enough to save Sakura, and the world?

So, we’re finally at the end of the most sought-after route of Fate/Stay Night. The movies have been in production since 2014 and now in 2022, the UK we can finally say we have the most complete story of the original visual novel, without having played the game itself (as it’s never been released outside of Japan). But as a trilogy of films, is Spring Song a satisfying conclusion? Speaking as someone who got into Fate via the original Studio Deen anime and has been dipping in and out of Fate lore and anime adaptations since, I can say wholeheartedly that Spring Song is a highly satisfying film in a multitude of ways. 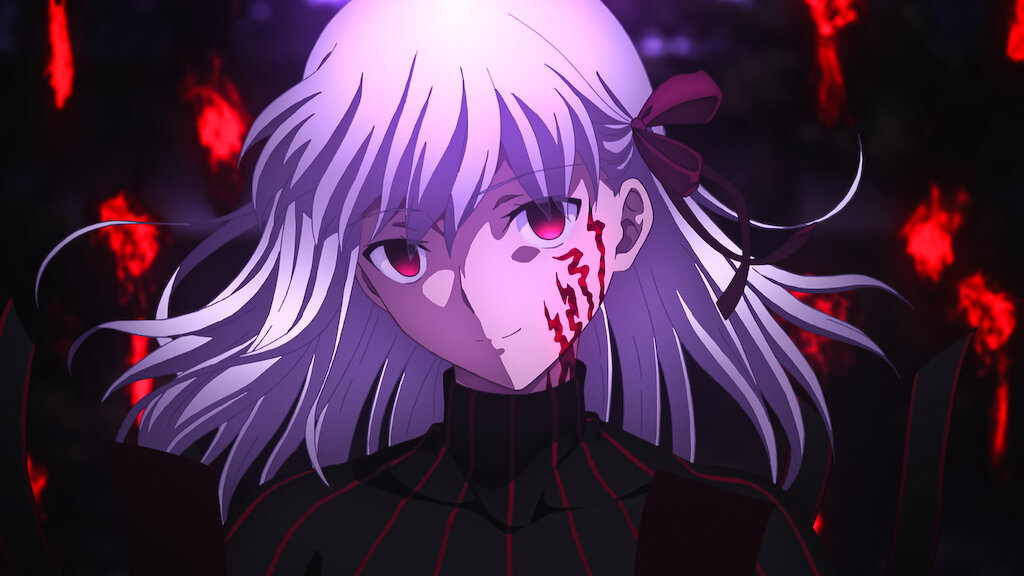 From the very start, when the movie was announced, there were two particular characters fans most looked forward to seeing on the big screen – Saber Alter and Dark Sakura. The former was seen in Lost Butterly, having been teased in the climax of the first film, but the latter had two films of build-up, with her debut finally coming here. Dark Sakura has always had a cool design, with ufotable’s animation kicking it up to 11 out of 10, with the fantastic 3D blending to make her dress feel alive and dangerous, but her character also has a convincing arc and conclusion. Sakura is a textbook abuse victim; having been physically and mentally tortured for over a decade and surrounded by ‘family’ who have convinced her that it’s what she deserves, Sakura hates herself and longs for release from it all but also feels guilty for thinking it. Even with her relationship with Shirou, it’s only a temporary fix as at the end of the last movie. She decides to leave, due to her guilt, which leads to the circumstances which kill her brother, and then fully gives in to her darkest impulses.

At first, she seems to be fully on the dark side and ready to kill without remorse but, as we see over the course of the film, when those who hurt her most are suddenly gone, she starts to question everything and feels shaken up by it, as her pain and the abuse afflicted on her, remains as it is. It’s the reality of her world that clashes with Shirou’s idealistic view of a ‘hero’ because his aim to save everyone means also saving the same monsters who pushed Sakura to become what she is, and sometimes an ideal cannot co-exist with reality. The same goes for Rin. She builds up a steely resolve to kill her sister at any cost, having been raised to be a Tohsaka mage, and to live up to their ideals, but in the end her heritage and the generations past played a huge part in creating the circumstances they are in now. It’s her finally breaking the cycle that helps make this route far more satisfying, rather than the Unlimited Blades Works route, which tried to ‘have its cake and eat it too’ and meet it halfway when it came to the idealistic heroic worldview, and in the end felt so dissatisfying.

But outside of the main heroes there’s so much more fulfilling content for long-term Fate fans; Kirei Kotomine finally steps out of the shadows of his church and gets a chance to kick arse here, unlike in Unlimited Blade Works where he was cut down before he could. Heaven’s Feel feels like a true conclusion for his arc that paused at the end of Fate/Zero, and fans of that series should find his final moments far more satisfying here. There is quite a lot of dialogue that is a re-tread of Fate/Zero, that could have done with some editing to avoid as much repetition, but it’s also understandable why they did it, considering how long ago Fate/Zero happened. We also get a full-on fist fight with him at the climax which, despite being surrounded by magic-based epic battles, still feels rewarding. Rider also comes out on top in this film, with the award for ‘most underrated Servant’, considering how often she was sidelined before, it’s so wonderful to see her true strengths come out. Her battle with Saber Alter looks like a dance of the Gods, with so much wonderful choreography and killer lines added in for good measure. 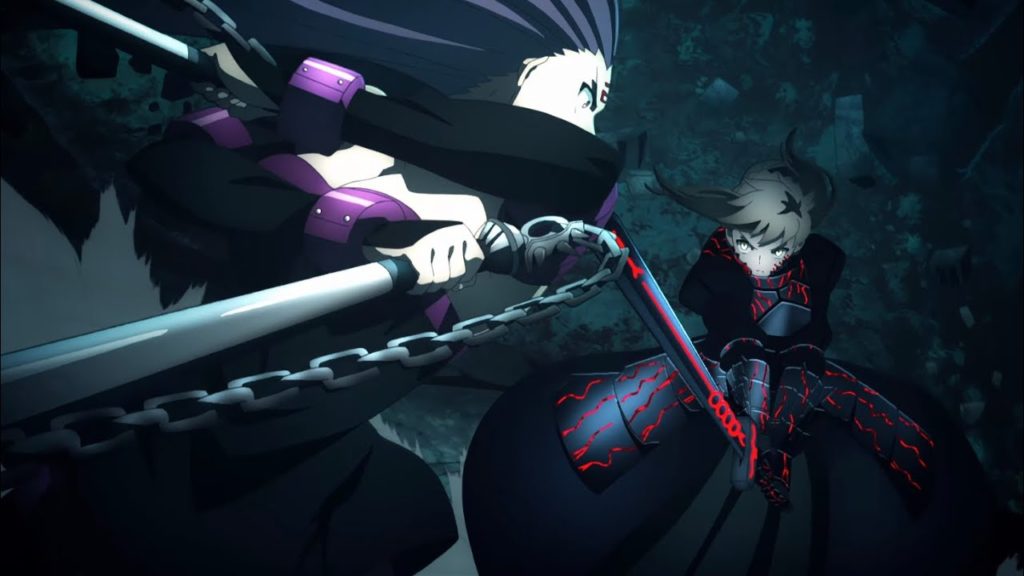 If you’ve just been following the anime, however, there are a couple of times where the movie just trips ever so slightly and doesn’t hit the note its going for. For example, the tearful scene between Illiya and Shioru won’t hit as hard for anime-only watchers as a lot of her bonding scenes from the game were cut for time. Saber’s final moments with Shirou also just misses the mark, as the only way we got to feel her and Shirou’s connection was via the Fate route, which hasn’t been given the ufotable treatment. Arguably, she suffers the most as a character across the whole trilogy. Then there’s the lore dumping, because it wouldn’t be a Fate anime without it! There are a few scenes slowed right down to explain certain rules of magic, such as why Kirei survives a certain battle midway through the film, that interrupt the pacing of the movie quite a bit. Then there are times where the lore and world rules aren’t explained at all and will leave anime-only viewers baffled, the ending montage being the biggest one, but also the mental effect the power of Archer’s arm has on Shirou (his outward physical effect is portrayed excellently, but his memory loss feels as if it was tacked on).

Like the other two films, the animation is beyond stunning in Spring Song, and somehow the fight scenes are even better here than they were in Lost Butterfly. Ufotable somehow blows everything out of the water with these visuals, and they bring to life the original games’ most iconic moments – Shirou’s battle with Berserker, the hellscape in the final battle, the looming danger of the shadows – in a way that other Fate anime series only aspire to. I also love the attention to detail with the goriest of moments, like Shirou’s physical transformation in the climactic battle, being highly detailed and not afraid to show the true horror of how his newfound power affects him.

Yuki Kajiura also provides an amazingly haunting yet inspiring soundtrack, I do wish she remixed a few more tracks from the games (her remix of Shirou’s theme was epically timed) but her score is fantastic nevertheless. Then there’s the English dub; despite only having a few lines, Kari Wahlgren gives a commanding performance as Saber in her darkest form yet. Melissa Fahn as Rider continues to be a standout performance once her character is given a chance to shine in the second half, and there’s something very satisfying and cathartic to hear Mela Lee, who has voiced Rin since the very beginning (unlike everyone else from the Deen anime who has been recast) be a part of Rin’s final arc of the games. 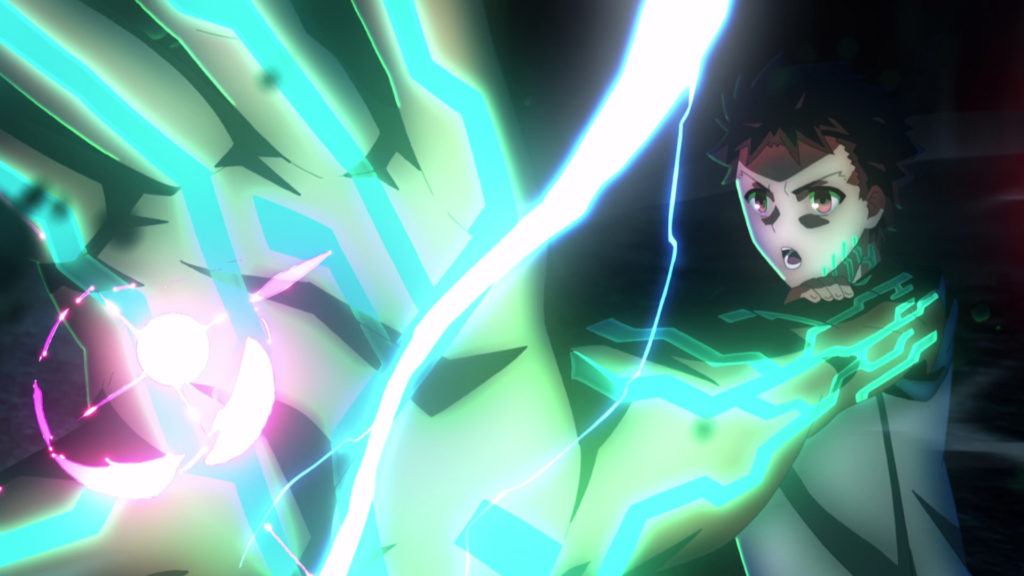 On-disc extras are sadly lacking, with only commercials and trailers added. I was hoping that, like the Unlimited Blade Works extras in Japan, we would get some of the other game endings animated as well, like the fan-favourite ‘Sparks Linear High’ but that sadly would’ve been its own budget so it’s understandable they didn’t. If you purchase MVM’s collector’s edition of the film, you also get two art books (100 page & 60 page) housed in a rigid artbox.

Heaven’s Feel III – Spring Song isn’t just a satisfying conclusion to the Heaven’s Feel story arc, but also a cathartic ending to all the Fate ufotable anime that comes before; wrapping up the important character arcs and ending on a happy note that allows for character growth across the board. If you’ve held back from seeing any of the Heaven’s Feel movies, to see how it all turns out, I can happily say it’s a very worthwhile journey. If you’re a Fate fan, this is a movie trilogy you shouldn’t miss out on. 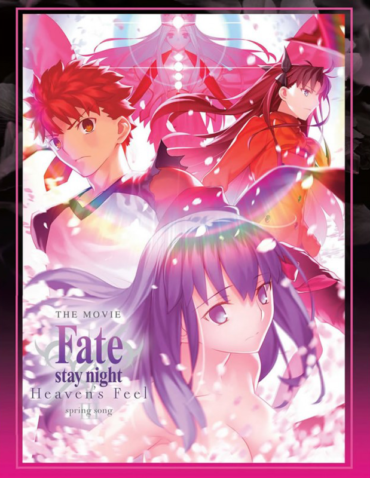 Despite not being about any Holy Grail Wars, is Fate’s take on a ‘detective mystery’ still worth checking out?