Since its debut in 2003, Death Note has been incredibly influential; not only did it expand on what the Shonen genre could be, in terms of what kind of stories could be told and the themes they could cover, but its anime adaptation is still considered one of the gateway anime in the Western world. The manga ended in 2006, and the anime in 2007, but many Death Note-related media have been created since the original story’s end, from the various live action Japanese films, that one Netflix movie, a J-drama, a musical and of course, various one-off manga by the original creators. Despite its success in the West, not all of the Death Note media created has been released physically over here, but luckily this year we got the first Death Note manga release in quite a while: a short story collection that contains many one-off stories dating from 2008 – 2021 that have never been released in English previously…at least, two-thirds haven’t been released before…but we’ll get to that in a moment.

In case you haven’t heard of the series, or need a small reminder, a Death Note is a notebook that has the power to kill anyone, if you write their name down in the book. There are numerous rules such as ‘heart attack’ being the default cause of death unless one is specified, and if you give up the book you also lose your memories of said book, etc. etc. There’s Ryuk; the Shinigami (Death God) who owns said book and must stay with the human who takes ownership of it until they die or relinquishes it (whichever comes first). If you’ve yet to read/watch the series, it’s highly recommended you do before picking up this collection, as it spoils the ending within the first two pages. Luckily the manga and anime are still in license, so it’s very easy to experience the story before diving in.

The first story is ‘C-Kira’, originally published in Japan, February 2008. It takes place two years after the original manga’s ending and there’s a new ‘Kira’ on the loose but this time, focusing on their attention on killing off 60+ year olds. But the story is mostly centred on Near, who is now fully in the ‘L’ role, and we get a little flashback into his past on his first introduction with the original L as well as how he’s doing since Light passed away. This chapter is short, and overall, probably the least exciting (drama-wise) but there’s still some information to chew on within this book. Interestingly, we never get to see the new ‘Kira’ in this story, only their actions and their passing told via the Shinigami, and in a way it doesn’t matter who they are – but their short life and actions show that not everyone has the mental capacity to deal with the consequences of the book, considering that a lot of ‘copycat’ murders emerged when the series took off, it’s almost like the series tried to de-sensationalise the effect that Light character had as a result of the Death Note.

But ‘C-Kira’ also leads directly into the next short, as it’s this Kira’s actions that influence Ryuk’s actions in ‘a-Kira’, also known as ‘Never Complete’ Death Note one-shot. This came out digitally for free in 2020 but has now become paid content on VIZ’s website – or you can just pick up this book! ‘a-Kira’ is set ten years after Light’s downfall and the world has changed drastically; there’s much more heavily surveillance in the streets, public buildings, cars and even phones are no longer untraceable. So when Ryuk comes to Earth and decides to give the Death Note to Minoru Tanaka, a highly intelligent high school student, he can’t exactly repeat Kira’s previous actions…but that doesn’t mean he can’t use it at all! This chapter got a lot of positive feedback when it came out in 2020, including from myself, and it still holds up today in 2022. The one-shot plays into audience’s expectations; because we’re following another super-smart student like Light, we expect Tanaka to play a similar game: kill people and hide from the new L and his associates. But they are not the same character; Light was the picture of perfection; smart, friendly, well-presented, handsome with a typically happy family, and prospects in a well-respected field: police work. Nevertheless, Light was also bored and disillusioned with the world, no thanks to the horrific crime stats that he got via his father’s work, so he wants to ‘fix’ the world in his own twisted way. Tanaka, however, is a smart student but doesn’t apply himself, seeing school as not the only means to express intelligence; we also see him listening to his music and to other people having conversations, internalising it rather than speaking out loud, the complete opposite of Light. So, it makes perfect sense that what Tanaka does with the Death Note is also opposite to Light, and it’s, quite frankly, bloody brilliant. The tension building in just this one chapter, telling a complete story whilst also leaving the audience wanting more, makes this the highlight of this short story collection by far.

Outside of Kira-centric stories, we also have two L-centric shorts, entitled ‘The Wammy’s House’ and ‘One Day’. In Japan they were originally published in 2008, to promote the L: Change the WorLd novel, but this is the first time they’ve been translated into English. They’re two very short and comical stories centred on our favourite eccentric detective outside of Sherlock. ‘Wammy’s House’ is a quick look into L’s first few years at the orphanage and how he fell into solving crime, and ‘One Day’ shows Wammy’s daily routine of looking after L whilst he’s a detective. If you love L, you’ll find these shorts endearing but they don’t really tell us anything we don’t already know about the character himself.

Then we come to the not-so-exclusive releases part of this book. One third of this book has been published before in English: the Death Note Four-Panel comics and the pilot chapter, ‘Taro Kagami’. If you own the (now out of print) ‘Volume 13: How to Read’ then you also already own these manga shorts. They haven’t been re-translated for this Short Stories collection, they’re the exact same (with the same translators credited on the back). The Four-Panel stories are a bunch of comical 4-panel stories, usually centred on Light, L or both, with some even taking place during the four-year gap that happens within the original story. Some of them are quite funny; I like the one with Ryuk being unable to eat a snack Misa made because they looked too cute. The pilot chapter is also a fun read, because it shows how far Tsugumi Ohba has come in terms of storytelling. A lot of the answers come easy in this pilot and the stakes and drama are deflated before they even start, so it’s interesting to see that he went from one extreme to the other with the Death Note we know and love, with the story being full of complicated plans, high stakes and drama constantly rising.

Stephen Paul translates all the new material, and it flows very well into the previously translated content and matches up with the whole of Death Note we know. The book comes with a few colour pages, and a cover with flaps and glossy embossing that looks striking in the right light.

Death Note Short Stories is going to mean something different to everyone. If you haven’t picked up a manga related to Death Note since its last volume, then this is a lovely book with great stories to re-introduce yourself into this unique world. If you’re a hard-core collector, then you’ll find less here that is new and to get excited about. Either way, it’s presented very well and would make a good addition to anyone’s manga collection. 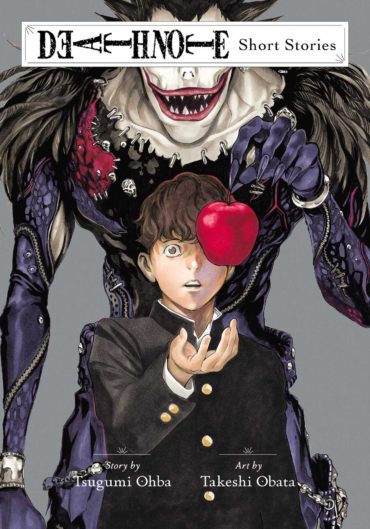 The latest issue of Weekly Shonen Jump has the announcement of the creation of a third season of Bakuman which is due to be aired from autumn 2012. Synopsis Moritaka Mashiro is a talented artist, Akito Takagi is an aspiring writer and the two aspire to become the greatest manga artists in Japan. They are … Continued

We’ve rounded up a selection of COMPLETELY LEGAL AND FREE anime and manga to help YOU survive the lockdown.