Satomi Oka loves to sing and as an experienced boy soprano in his final year at middle school, he’s the head of the school choir. Coming away from the latest choral competition (they were pipped to the post by a rival school who beat them into second place) he’s accosted by a smiling young man, smartly dressed, who says, “Let’s go karaoke!”

And that’s how Satomi finds himself in a room at Karaoke Heaven with the stranger who introduces himself as Kyouji Narita. He’s a yakuza and he wants Satomi to give him singing lessons. The reason? His boss likes to hold quarterly karaoke contests for his men – and the one with the worst score gets a tattoo from the boss who just happens to be learning the art of tattooing but is really bad at it. To make matters worse, the boss has perfect pitch, so he knows all too well who’s unable to hold a melody!

For reasons not entirely clear to himself, Satomi relents. Perhaps because it’s his last year as head of the choir and his voice might break at any time (and his successor is far from subtle in telling him how much he wants to take his place). And not only does he find himself whisked away to Karaoke Heaven to tutor Kyouji, it turns out the rest of the clan want to be coached as well. Even though he intends to distance himself from Kyouji, Satomi’s experience and training as a singer impels him to draw up a list of songs far more suited to the yakuza’s voice than his favourite number ‘Crimson’ by X Japan. In return, Kyouji gives him a map of places not to go in the area; surely he won’t need that kind of advice? Or has the fact that he’s been seen keeping company with a known yakuza put him in danger?

Let’s Go Karaoke! is a real page-turner – something that might not be immediately apparent from the blurb. But thanks to Yama Wayama’s skilful and engaging way of revealing her story, Satomi’s karaoke predicament makes for a great read. And it’s funny too! Check out Satomi’s first visit to Karaoke Heaven and the offhand way in which Kyouji reveals the details of his boss’s karaoke challenge, one by one. Then there’s the way Satomi reacts to Kyouji’s performance of ‘Crimson’; as the yakuza’s rendition becomes more and more animated, what does Satomi do? He reaches for the phone to order some fried rice. When the song is over and Satomi delivers his withering verdict, it’s impossible not to feel sorry for the crestfallen yakuza who’s just given his all. We’re alternately feeling squirmingly uncomfortable with Satomi – and intrigued when he decides (although does he have much choice?) to help Kyouji to improve his performance and escape the dreaded tattooing needle wielded by his boss! At first Satomi is in a perpetual state of blue funk, perspiring profusely, jumping at the slightest movement, interpreting everything Kyouji says in the worst possible light. And then… something changes between them – or is it that Satomi relaxes a little in Kyouki’s company and can share thoughts with him that he can’t share with anyone else? The climax of the story is brilliantly conveyed, juxtaposing two simultaneously occurring threads to dramatic effect.

The mangaka’s characters are drawn in a realistic style, avoiding the temptation to prettify anyone, even bespectacled Satomi, or give them a standard ‘manga’ makeover. This works especially well for the rest of Kyouji’s yakuza clan who, in spite of their smart suits and slicked back hair, look suitably shady. But it’s in the way Yama Wayama involves the reader in Satomi’s plight, subtly planting little plot points along the way that will pay off later on as the story builds to its climax, that her skill as a storyteller shows through. And there’s an essential final bonus chapter ‘Extra’ that absolutely has to be read as it sheds light on events in the main narrative; a nice, neat touch!

The Yen Press edition offers us a trade paperback, a good size to do justice to the mangaka’s art which, apart from the neon colours on the cover, is black and white throughout (even the glossy front page). The translation is by Leighann Harvey and captures well the easy, self-confident speech of the yakuza; there are helpful Translation Notes at the end, as well as a couple of character profiles, ostensibly filled in by the main protagonists.

This is the second manga of the three that relatively new mangaka Yama Wayama has published to be released in English translation (the first, Captivated By You, is a collection of short stories). She’s definitely a mangaka to watch with a refreshingly unique approach to her material.

Let’s Go Karaoke! is a little gem; a really well-constructed story with fascinating chalk-and-cheese characters brought together by the desire to make music (or not have to endure being given a painful tattoo by an over-eager boss). 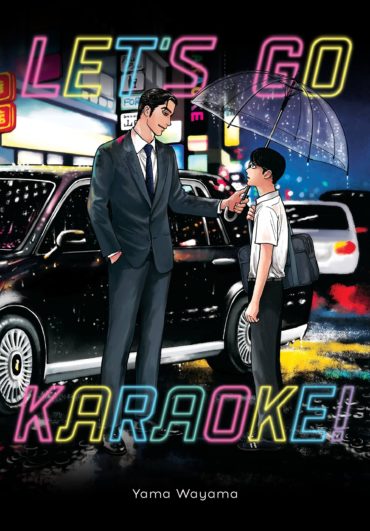