Pen the Penguin and his human owner Hayakawa are off on a skiing holiday with Hayakawa’s fellow students. As expected, Pen is a very accomplished little skier, ready to come to the rescue when his humans get into difficulties. After this snowy start, Pen and Madeline (the penguin who belongs to Yumeko, a high school girl who’s interested in  Hayakawa) get together to plot Valentine’s Day to bring their humans closer together in a romantic situation. As expected, things don’t go in any way according to plan. And so life continues for a penguin and his human, through an evening at the bowling alley, an all-you-can eat challenge, a cherry blossom-viewing picnic… If you’ve read the first volume of Penguin & House, you’ll know the format, even though there are variations on the themes that permeate each short chapter to keep things interesting for the reader. However, the pay-off still tends to be the same: Pen does something amazing to help out, or cooks something really delicious (fluffy pancakes, a special bento) – but Hayakawa somehow manages to spoil it, usually without meaning to but just by acting obliviously.

However, in a change from the usual state of affairs, Pen goes to help out at the restaurant where Hayakawa has a part-time job when the elderly owner hurts his back. Pen and Hayakawa do their best (working side-by-side!) but when Pen cuts the soba noodles, the owner tells him that he’s not quite done it right. Pen, the perfectionist, can’t sleep, the owner’s words echoing around his head – and stays up all night practising to get his soba just right. And what happens when they go back to the restaurant…?

The final chapter ends on a cliffhanger! Yes, we don’t know what happens after The Penguin Enters a Fashion Photo Contest in a Shopping Mall except, after Pen tries on all kinds of outfits, encouraged by Hayakawa and his friends, the sudden appearance of two young women causes a stir.

These chapters show us… perhaps… a sea-change in Hayakawa’s lackadaisical attitude toward his penguin. The two do more together. If the volume concludes with three 4-koma entitled Bad Pen, showing… well, what Pen would do if he were not the helpful little fellow he is, the final 4-koma reveal Pen’s Evening Routine, moisturising beauty mask and all.

Pen doesn’t communicate verbally – but he doesn’t need to; his gestures, actions and expressions speak volumes. If anything, he’s become more expressive and those eyes – which can appear shifty – sometimes show us a more sympathetic side to his character. He really does put up with a great deal! Perhaps Akiho Ieda, the mangaka, felt the need to make Pen less creepy; there were many moments in the first volume in which he looked distinctly sinister. He still couldn’t be described as ‘cute’ in any way but his stoicism in the face of many disappointments is truly admirable; he’s very tolerant of his human’s thoughtless behaviour.

This second volume from Kodansha is once again ably translated by Sawa Matsueda Savage and again includes useful illustrated translation notes at the back. The third volume (already available) brings this quirky little series to a conclusion. This manga is rated as suitable for All Ages 8+, making it a possible addition to the school library manga section, although the humour isn’t especially child-friendly.

And if you’re interested in how to make Boba Tea from scratch, there’s a whole chapter in which Pen and Hayakawa’s friend Ota have a go with cassava root; it’s a time-consuming, laborious process. Do they succeed? You’ll have to read the book to find out! 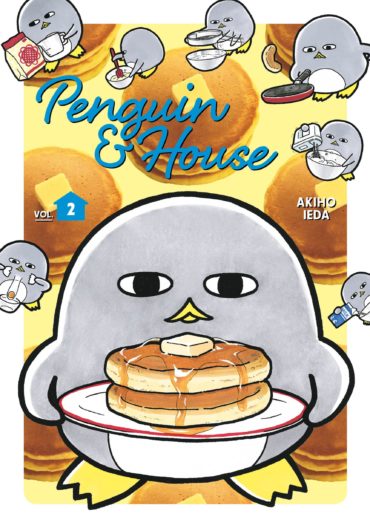 A manga about a carefree student and his house-proud pet penguin, told in bite-size chapters…

The blue summer sky promises fine weather as high-schoolers Saeki and Wataru set out to visit the locations used in a favourite film. But do these places hold a greater significance for Saeki – and will their friendship ever be the same again?

Yatora stubbornly pursues his dream to study art at university – but it’s an uphill struggle. Has he the skill and determination to keep going?

The Witch and the Beast Volume 5  Review

How did Ashaf the Mage and Guideau, the witch-cursed young woman first meet? The fifth volume of The Witch and the Beast has some intriguing answers…