Please note that this review contains spoilers for Aria The Masterpiece Volume 3!

The narrative itself takes place in the 24th century with Neo-Venezia being a city on the Planet Aqua, formerly known as Mars. Neo-Venezia is based on Venice, as seen through the architectural style, being a harbour city with narrow canals aplenty and a reliance on gondolas for travel.

This volume continues the story of main protagonist Akari, an apprentice gondolier who is working her way towards becoming a full-fledged Prima. In the second volume, Akari continued to develop her skills, having her first customer as a pair and also met new characters including Albert “Al” Pitt, a Gnome (a term referring to those who work underground regulating Aqua’s gravity so that it is the same as Manhome’s).

This third volume marks a year since Akari arrived at Neo-Venezia and the start of springtime. It also introduces a new character in Alice, a deadpan and anti-social pair who works for the largest water-guide company Orange Planet, and whose rowing skills and hard work, despite her young age, have led to her employment there.

Akari’s friend Aika, unimpressed with Alice’s attitude, challenges her to a race and loses in a roundabout fashion, but it leads to Alice becoming friends with the duo. The way that the story explores her struggles with socialising and feeling detached from others provides an interesting contrast to the other characters, though it reinforces just how positive an impact Akari has on others as Alice begins to open up and have fun being her friend.

The lore of the story is also explored here as we are introduced to the concept of Neo-Venezia’s Three Water Fairies – a title which is given to the most accomplished Undines in the city. One of these fairies is introduced early into the volume in Akira E. Ferrari, a Prima Undine (top gondolier) for Himeya and Aika’s mentor figure.

Though the two butt heads on occasion, there’s a real sense that Akira has a lot of confidence in Aika to succeed and that the two share a deep bond, which Akari envies and hopes to one day replicate with her mentor Alicia.

An example of this strengthening bond is showcased when Akari and Alice venture out on a getaway to “find Spring”, which leads the pair to an abandoned freight station and along its derelict tracks, long since overrun by nature. The theme of nature taking back from technology is exemplified by the striking imagery of a cherry blossom tree growing within an abandoned train car, bursting and blooming to life when President Aria climbs an adjacent power line.

Further customs and traditions on Neo-Venezia get explored this volume also with a chapter focusing on the Festa Del Bocolo – the day a man gives a single rose to his beloved lady, hence the translation of “Red rose bloom”. It is here that we see the return of Akatsuki, the impatient apprentice Salamander who teases Akari with the nickname “Sideburns” and was her very first customer as a pair in the previous volume.

He is looking for the perfect rose to give his crush Alicia which leads Akari to tag along and help, learning more about the custom in the process. Though this ends in humorous failure for Akatsuki, he decides to give a rose to Akari who, in comparison to Alicia and her entire gondola full of roses, appreciates the gesture immensely and leaves Akatsuki redder than the rose itself.

Aria continues to expand on its supernatural elements as Akari once again finds herself wandering into a supposedly illusionary dreamscape, full of stalls and a café home to a mysterious owner and cat statues aplenty. The visuals here are great, though from a story perspective, Akari seems once again unfazed by the scenario.

The concept of Sylphs (those who use air bikes to fly necessary supplies all over the city for maintenance purposes) are introduced this volume through the presence of Ayanokoji, the 51st of Roman Air, who prefers to go by the name Woody. Despite his role as a Sylph, he’s cursed with a terrible sense of direction which prompts Akari to help him navigate when his map goes AWOL.

The sequence of the duo and President Aria flying above Neo-Venezia presents some wonderful artwork from mangaka Kozue Amano and also brings some exhilaration to the otherwise more serene plots that make up the storyline.

The final chapters in this volume see Akari, Aika and Alice visiting the now-retired legendary Water Fairy and founder of the Aria company who goes by “Grandma” in the English translation here.

Though the trio visit Grandma with the intent of learning the secret to becoming a Prima, they instead end up having fun and helping with various chores, which turns out to be the very secret Alicia kept from them – to have fun, which as Grandma puts it is “a secret to a happy life”.

The final chapter focuses on the Redentore festival, in which people celebrate all night on illuminated boats and then gather at Lido Island to watch the sunrise as a finale. Akari, Aika and Alice are tasked by Aika to host on their own boat as part of their training.

This in turn sees many familiar faces who are invited for the evening, including Akatsuki, Al and Woody and even Grandma from the previous chapter. It’s a lovely union of characters topped off with fireworks and really hones in on and sums up the appeal of Aria as a manga.

Translation for Aria The Masterpiece was once again carried out by Alethea & Athena Nibley who do a solid job of preserving both the characters’ personalities and the various explanations of the story and its lore.

It is also again worth noting that Aria The Masterpiece was recently reprinted via a commission by Rightstuf based on demand by those who were either missing volumes or wanted to have the entire story in their library – this is how this volume was obtained for review.

Overall, Aria The Masterpiece Volume 3 maintains the quality of the previous volumes, continuing to expand its world-building with new characters and occupations, all whilst focusing on Akari’s growth and positive influence on those around her. 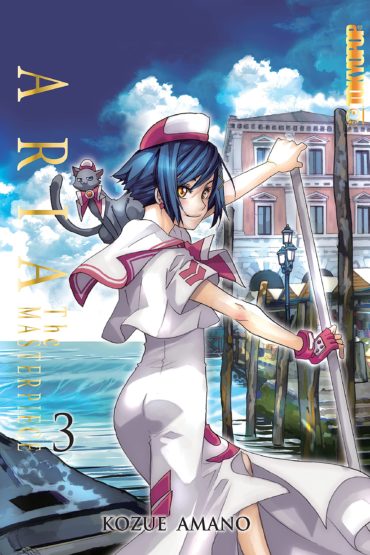