In Volume 11 of A Sister’s All You Need protagonist Itsuki was facing his most difficult challenge yet – overcoming writer’s block. By the end of the book our hero had found a solution, but it wasn’t what his loved ones were hoping for. With a cliff-hanger to finish off the book, I’ve been eager to dive into Volume 12 and find out how things will change!

Itsuki’s writer’s block came about thanks to his aversion to writing stories that featured sister-obsessed characters. In the end, Itsuki came to terms with the fact he could no longer be the hero of his own story and decided to crank out light novels without the passion he previously held. No one can argue that the work he’s writing now is bad and arguably it appeals to a much bigger audience, but the diehard fans know this isn’t Itsuki at his best and it lacks that eccentric something that makes his work special.

The person most upset by Itsuki’s new direction is his girlfriend (and fellow novelist) Nayuta, who can’t accept that her boyfriend would be fine with publishing work like this. At the very end of Volume 11, they break up. Now here in Volume 12, friends Haruto and Miyako are left to pick up the pieces as Nayuta shuts herself away and refuses to write, while Itsuki distances himself from everyone to focus on output over quality.

Nayuta’s refusal to write causes chaos at the GF Bunko editorial office, where Nayuta’s work is not only among their most popular releases but one of the books is currently being adapted into a live-action film. The editor-in-chief asks Miyako to do anything she can to aid Nayuta to start writing again, but, as her friend, Miyako worries that forcing the issue isn’t the right thing to do. She’d rather Nayuta took the time to bounce back by herself, either by fixing things with Itsuki or finding a new path forward.

Meanwhile, Haruto is stuck with dealing with Itsuki, which is easier said than done, given the two are heated rivals as much as they are friends. Haruto has a new series ready to go into production, a robot fantasy, with a multitude of talent helping out with illustrations and mecha designs. Usually, this would be the kind of news that would fire Itsuki up, making the quality of his output the best it can be and spurring Haruto on at the same time. But with Itsuki in his current state, Haruto can do nothing but grow frustrated, having lost the one person he wanted to compete with the most.

As always with A Sister’s All You Need, this instalment manages to combine tales of the publishing industry with heartfelt human drama. Haruto and Itsuki’s argument and discontented feelings are perhaps not the most powerful storyline here; instead, that rests with Nayuta and Miyako. I like that author Yomi Hirasaka focuses not only on how Nayuta’s sudden decision to quit affects the publisher and the film team working on one of the adaptations but also on Miyako’s morals in not wanting to force a resolution. It certainly proves a learning curve for Miyako in general, given she wants to work as an editor who always stands by her authors and works in their best interests. In this case, what is in Nayuta’s best interest? That’s the question she must wrestle with.

I’m not sure this release is quite as captivating and compelling as Volume 11 was, but that’s not a knock against it either, given just how strong that book was. Although Volume 12 acts as a conclusion to the arc, the peak was certainly in that middle volume where everything finally came to a head. In this one, the readers are left watching over the cast as they pick themselves up and work out what to do next.

With only two volumes left in the series, Yomi Hirasaka has to start wrapping up the various storylines we’ve been following all this time. And we are starting to see that happening, as the main story we’ve been following the past few volumes concludes, alongside a couple of smaller plotlines that have been running for a while in the background. As much as I will be sad to see this series come to an end, I’m confident that Hirasaka will be able to neatly tie it all up in the books we’ve got left, based on what we’ve seen so far.

A Sister’s All You Need Volume 12 comes to the West thanks to Yen Press and continues to be translated by Kevin Gifford. The translation reads well with no issues to note. Volume 13 of the series is currently scheduled for an English release in October.

Overall, A Sister’s All You Need Volume 12 brings one of the series’ more emotional storylines to its end after some thoughtful character interactions. With only two books left, we’re heading straight into the finale, which I’m sure will be just as entertaining as everything we’ve experienced so far. 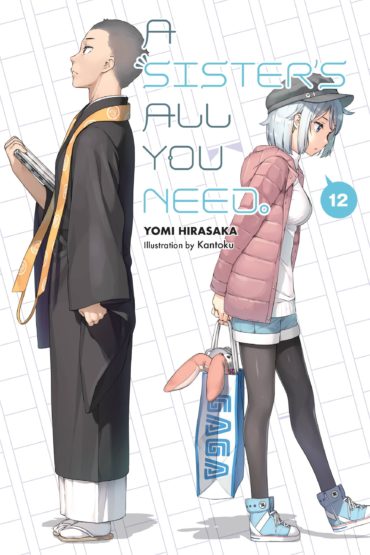 Title
A Sister's All You Need Volume 12