“What is it that you want to express through Shibuya?”

Yatora is still trying to adjust to the challenges of surviving the first year at Tokyo University of Arts (TUA). His first assignment didn’t go well – and the teaching staff are determined to challenge the students to think and create outside their comfort zones. The second assignment should be just right for him: the scenery of Tokyo. As it was his desire to depict the Tokyo district of Shibuya at dawn that first made him want to create his own art, surely this topic should inspire him? But he’s still struggling as all his preconceptions have been blown apart by the critical appraisals of his work by the teachers – and now he’s at a loss. And the two pieces – one a painting, the other a model – they’ve been asked to produce are to be formally assessed. “Techniques and knowledge are powerful weapons, but if you get too greedy or misuse them, your art will become indistinct.” Only now he recalls some advice given to him by Ooba-sensei when he was applying to TUA… and only now does it begin to make sense.

However, as soon as the students reach summer break they learn that they’re required to take part in ‘Geisai’, the TUA cultural festival, and are divided into three groups to make a mikoshi or portable shrine, as well as designing happi coats to wear as the portable shrines as carried through the streets; the third group are to design a food stand. The theme for this year is The Three Wise Monkeys (‘See no evil, Say no evil, Hear no evil.’) Yatora finds himself on the mikoshi team which is led by none other than Miki Kinemi, the good-hearted young woman whom he first met when she accidentally knocked over his mirror in the entrance exam. With only a month in which to create the shrine, they have a massive task ahead of them, working outside in the sweltering heat of a Tokyo summer. Will they be able to complete the task in time for the festival?

If I had concerns that Blue Period was going to lose its momentum, having shown us Yatora achieving his goal of getting into Tokyo University of Arts (TUA), this volume has reassured me that I needn’t have worried. One of Tsubasa Yamaguchi’s strengths is the ability to create three-dimensional characters that we readers find as fascinating and infuriating as Yatora does. Here we meet shedloads of new characters – or characters we’ve only briefly glimpsed before – as the first-year students are forced to work together for the cultural festival during a swelteringly hot summer. And because Yamaguchi’s drawings are so distinctive we get sucked in, like Yatora, to all the little dramas and crises that arise when you put a bunch of promising artists together and see if they can co-operate on a project to create something together. The aspect of three teams competing brings out new strengths and forges unexpected new friendships.

So, far from running out of steam by the eighth volume, Blue Period is finding new challenges for main protagonist Yatora and it’s great to watch him grow and mature. At this stage, it’s impossible to tell where his art will lead him but it’s a fascinating journey that anyone who’s studied art (or other art subjects) can relate to. When even prodigy Yotasuke is muttering to himself, “Do I need a reason for every single thing I paint?” we can find so much to sympathize with as the first years try to figure out what it is that compels them to make their art – and then deliver two pieces, one in 3D, the other in oils on canvas. After all Yatora’s agonized soul-searching, he eventually comes up with an ingenious and unpredictable solution to the set task.

There’s a great bonus story at the end of this volume, showing the first-year students out on a two-night, three-day sketching excursion, including a visit to a canvas-making factory with their three teachers. This culminates in a curry-making contest between the three groups with some… surprising results (they are art students, after all, so they were never going to create conventional curries). And the four 4-koma strips at the end introduce us to some of Yatora’s new friends: Kenji Hachiro; Yakumo Murai; Ayano Aizawa and Momoyo Kakinokizaka.

This eighth volume of Blue Period from Kodansha is again translated very ably by Ajani Oloye and reads well. No colour pictures, sadly, although the front and back cover art is superb and the mangaka’s splash pages are as witty and fun as in the other volumes. Volume 9 should already be out, although the delays continue with the physical editions. All in all, this volume delivers another fascinating look at the life of a group of young artists, trying to realize their dreams and become the best they can be in their chosen fields. 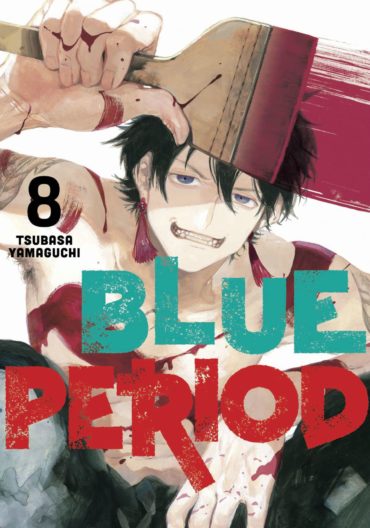