Kodansha’s Vertical imprint is becoming known for bringing variety into the manga market, the same way the company did before Kodansha reduced them down to simply being a label. Most recently the imprint has been home to manga by Shuzo Oshimi and works that focus on the hardships of life like Sensei’s Pious Lie, but today we’re here to look at something quite different – An Older Guy’s VR First Love.

The story follows Naoki, a 40-year-old man who enjoys spending his days in a VR world playing as his cute female avatar. One day while minding his own business, he’s approached by a player called Honami, who’s using a scantily dressed female avatar and chasing after Naoki without even introducing themselves!

Much to Naoki’s relief, he quickly discovers that Honami is simply a newbie to the world of VR and has no idea how to control their character properly, nor has a microphone to speak to Naoki properly. After Honami shows appreciation for the area in which Naoki likes to spend his time, our protagonist decides that it might not be so bad teaching Honami how this world works and showing them around before it sadly gets closed down due to the low numbers of people visiting.

As the two meet up day after day, they become at first friends and then lovers, despite having never met in reality. But that changes when Honami suddenly reveals they may no longer be able to visit the VR world due to needing to undergo surgery. Naoki is obviously heartbroken about this but is determined not to let this be the end of their relationship and searches for Honami in the real world.

In the afterword for this volume, mangaka Violence Tomoko admits that the point where Naoki and Honami meet in real life is where the story originally ended, but when putting the final book together they added a Part 2. Part 1 ends with Chapter 5, which means Part 2 is a sizable portion of the book containing a further eight chapters!

Part 2 sees us spend more time in the real world and also switches focus to Honami’s grandson, Aoi. With a long weekend coming up, Aoi’s mother encourages him to go and visit Honami – but upon arrival, he meets Naoki and is surprised to find what kind of relationship Naoki and Honami have!

If there’s one thing that can be said about An Older Guy’s VR First Love it’s that this manga is a story about love that transcends genders. In-game our main characters all play as female avatars and they don’t know or care what gender their companion happens to be in real life. Even after Naoki and Honami do meet in the real world, neither is concerned about the fact they’re both guys – which is refreshing!

It’s also nice to have this contrast between the VR world and the real world. With the introduction of Aoi, the story begins to deal with the fact both Naoki and Honami are comfortable in their relationship but worried about how coming out as gay would affect their working and family relationships.

The downside of Violence Tomoko having chosen to add Part 2 after the original story ended is that it feels disconnected from the first half, even while naturally carrying on the same tale. Maybe that’s also because of introducing us to a new character so far into the narrative, but I think the root of the problem is that the first half was largely a happy-go-lucky story while the second half is more melancholy. They just don’t go together very well, and I almost wish this had been two separate volumes, since a defined break between them would have helped.

It’s not helped by the fact that the artwork is much more suited to the virtual world setting than it is to real life. Violence Tomoko tends to use a lot of shading and has thick lines, which works for the more stereotypical video game designs of the two female avatars but looks strange away from that setting.

As previously mentioned, An Older Guy’s VR First Love comes to the West thanks to Kodansha via the Vertical Imprint and has been translated by David Musto. The translation reads well with no issues to note. This release also includes a colour page, which is always nice to see, and I think the mangaka’s work really pops in colour as opposed to black and white.

Overall, like many Vertical titles as of late, An Older Guy’s VR First Love is a mixed bag. The second half feels disconnected from the first half, which I think a lot of readers will struggle with. But I do like the messages the author is trying to convey and it’s rare to find LGBT+ series with an older couple, so if you’re looking for something like that then this certainly fits the bill. 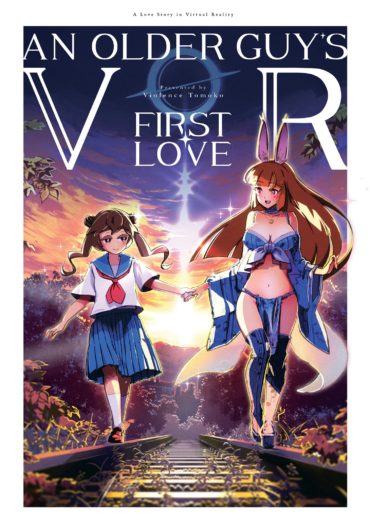