As we approach the month of December, UK (& US!) distributor Anime Limited have revealed new information for their plans at this year’s 12 Days of Christmas 2022 line-up.

Most of the details were announced during their Christmas Showcase video held on Thursday 24th November 6pm UK time, covering what will be on offer and which titles will be available for an early bird price!

The sale will begin on Thursday 1st December up until Monday 12th December.

Anime Limited’s Early Birds are dedicated to brand new products of new and existing licenses which will cover 11 of the 12 days in the sale. One of the 12 days will also include two Mystery Box bundles featuring tons of collector’s editions for a super special price. At their 2021 sale, they featured Boogiepop Phantom, Blood-C, Cardcaptor Sakura, El-Hazard: The Magnificent World, and more. For this year they have continued the trend plus added vinyl releases to the mix!

Other offers included during the sale:

We’re going to start off the list with titles that have already been released by Anime Limited and will be getting new editions: 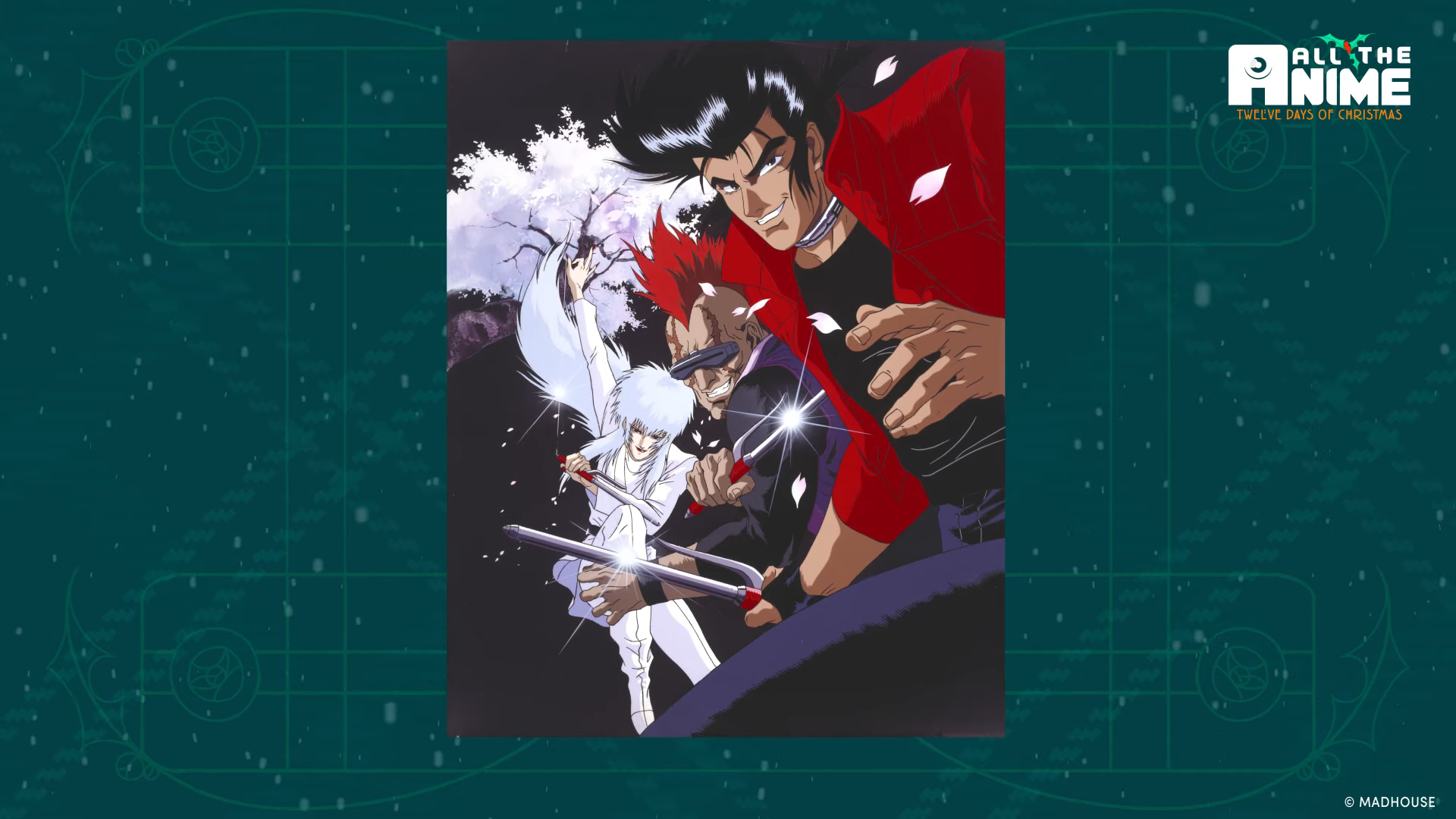 In 2020, Anime Limited added Cyber City Oedo 808 to its 12 Days of Christmas slate for an early 2021 release window. Fans were excited and it was one of the best-selling sets from that line-up. Unfortunately, that particular release turned out to be a disappointment for many, because the transfer was upscaled from old materials that, at the time, were the only ones available, as the authoring company and distributor both stated the original master was lost.

Now, two years later, Anime Limited are going to be re-releasing Cyber City Oedo 808 with a proper HD remaster, thanks to AnimEigo’s Robert Woodhead discovering a vault full of original masters for a number of classic anime while on his search for MADOX-01. In the US, distributor Discotek Media took this opportunity to release HD remasters of the Project A-Ko series, Violence Jack, Appleseed, and even Cyber City Oedo 808. The latter of which Anime Limited is now able to use for this new 2022 Collector’s Edition Blu-ray variant.

Details on the collector’s edition set include slightly different packaging but no other information was mentioned during the Christmas Showcase. It is expected to share the same disc content as the previous release, such as the audio options featuring Japanese with English subtitles, the classic Manga Entertainment UK English dub that utilises Rory McFarlane’s soundtrack and the Central Park Media (US Manga Corp.) US English dub using the original Japanese soundtrack by Kazz Toyama. 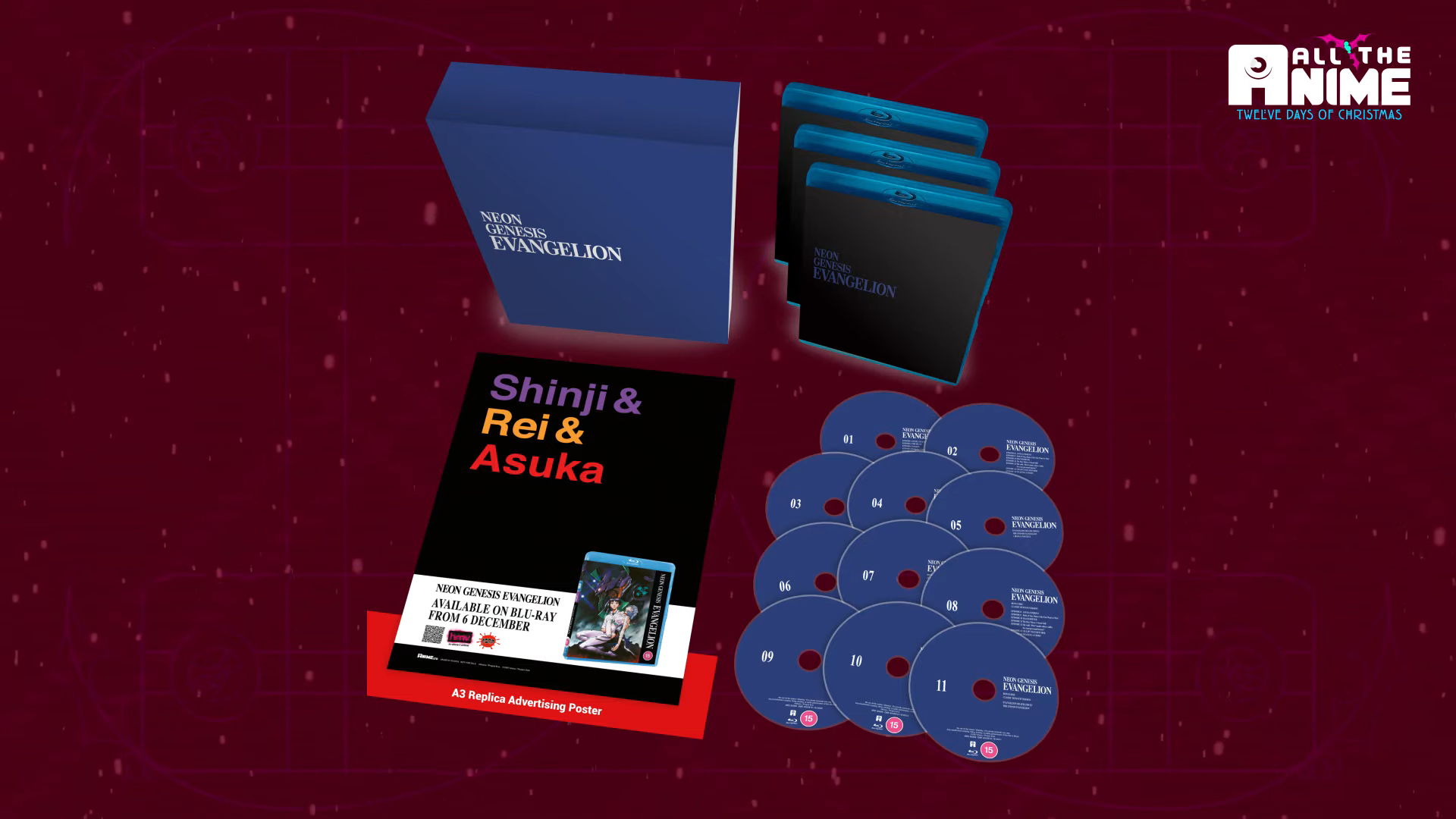 Last year, fans in the UK, US & Australia finally got their hands on the classic Neon Genesis Evangelion series on Blu-ray in different sets. That said, the collector’s edition was exclusive to Anime Limited & Zavvi’s storefront, but now folks will have another chance to own a version of that box set – with a new 2022 Collector’s Edition Blu-ray variant!

The collector’s set includes a rigid box with three Amaray cases to house all 11 discs previously featured before, and a A3 Replica Advertising Poster.

Much like before, due to licensing the ‘Fly Me to the Moon’ song is mostly removed from the UK release and it is expected to include the replacement disc that has the subtitles for the End of Evangelion deleted scene. 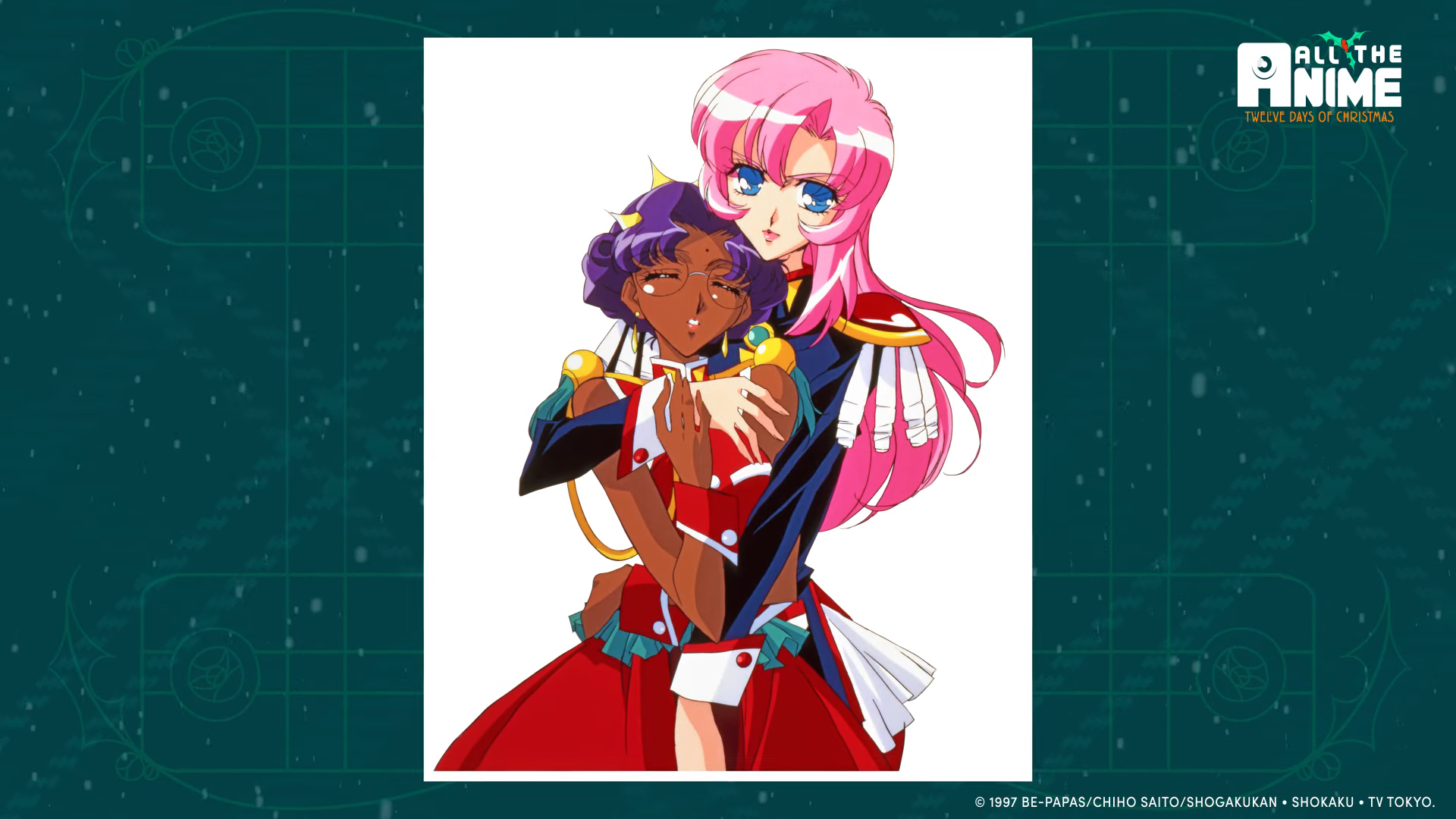 In 2020 Revolutionary Girl Utena (known in Japan as Shōjo Kakumei Utena from director Kunihiko Ikuhara and studio J.C.Staff) made its UK Blu-ray debut with three collector’s edition part box sets that sold pretty well for the distributor. This Christmas, Anime Limited will be re-releasing the series in one complete collection box set!

The collection set will include a rigid box set with three Amaray cases to house 10 discs previously featured before (which is both all 36 episodes of the original series, and the Adolescence of Utena film). The discs are the same as the previous releases so all of the on-disc bonus features are included as well as Japanese with English subtitles and Central Park Media’s English dub.

Next, we have titles that were licensed previously but are now finally on the horizon. 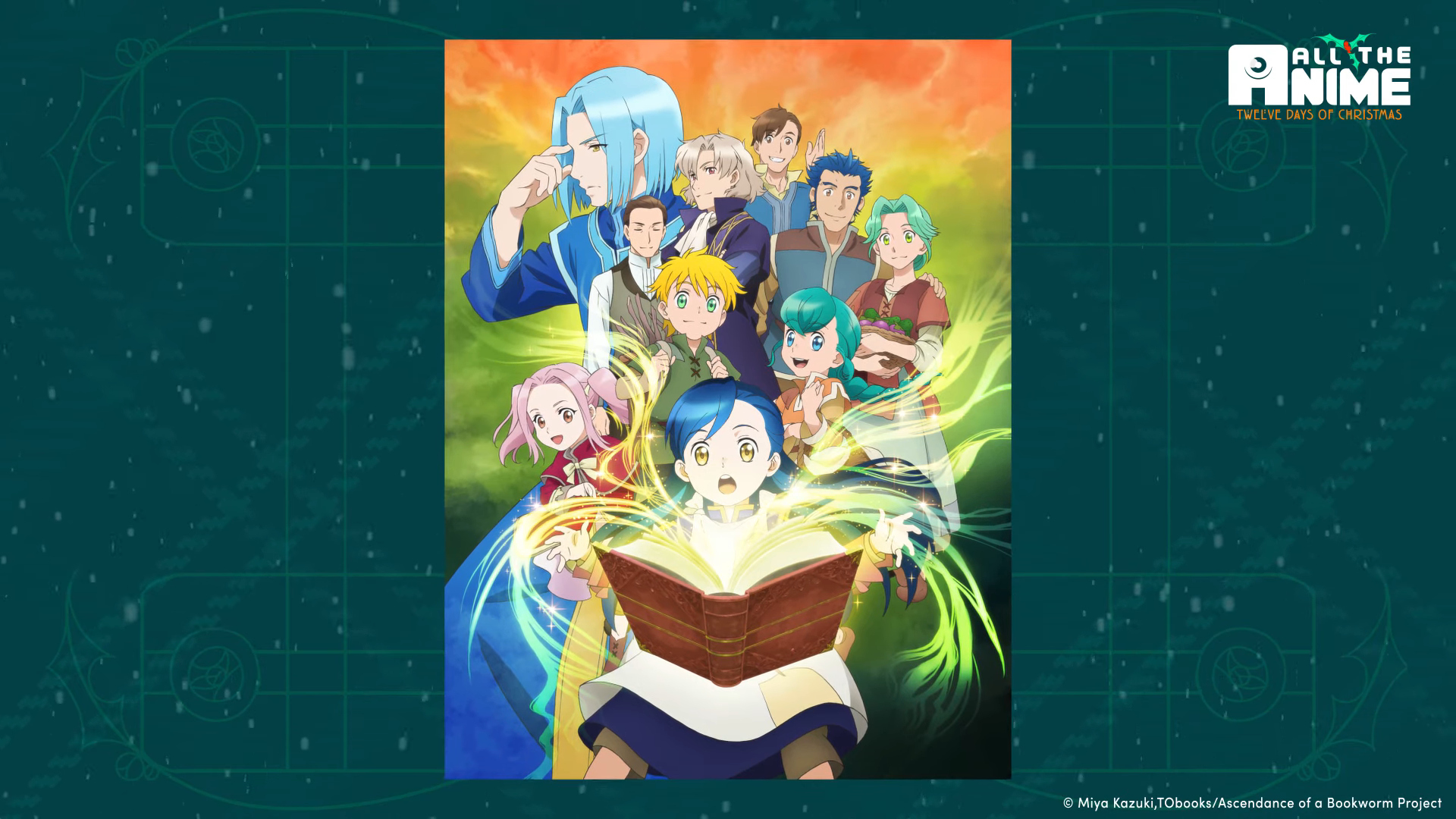 Ascendance of a Bookworm Seasons 1 & 2

The collector’s set includes a rigid box with two Amaray cases to house the discs, and a 100-page book full of character and production artwork. Japanese with English subtitles and Crunchyroll’s English dub will also be included.

The discs will be based on the US release (authored & released by Sentai on behalf of Crunchyroll) and therefore will use the Crunchyroll translation in terms of naming terminology (for instance ‘Main’ instead of ‘Myne’ that J-Novel Club had used for their light novel releases). 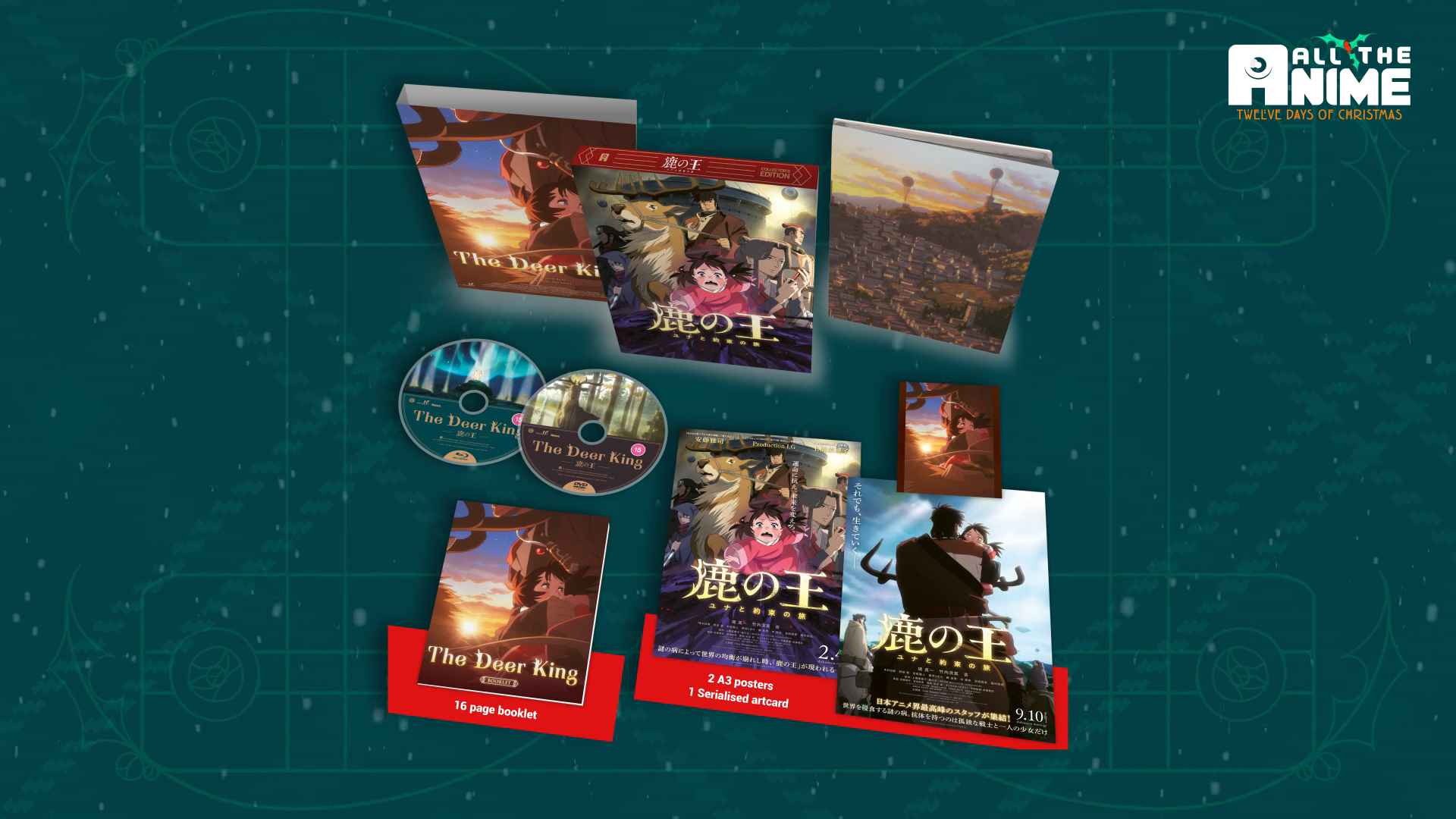 Based on Nahoko Uehashi’s 2014 light novel series Shika no Ō, studio Production I.G’s theatrical anime adaptation by directors Masashi Ando and Masayuki Miyagi is now coming to home video after its UK theatrical release earlier in the year in the form of a Collector’s Edition Blu-ray & DVD combo pack.

The collector’s set includes a rigid box and digipack packaging and the Blu-ray & DVD discs. Also included are 2 A3 posters, 1 serialised art card, and a 16-page booklet. Japanese with English subtitles and NYAV Post’s English dub by GKIDS will also be included. 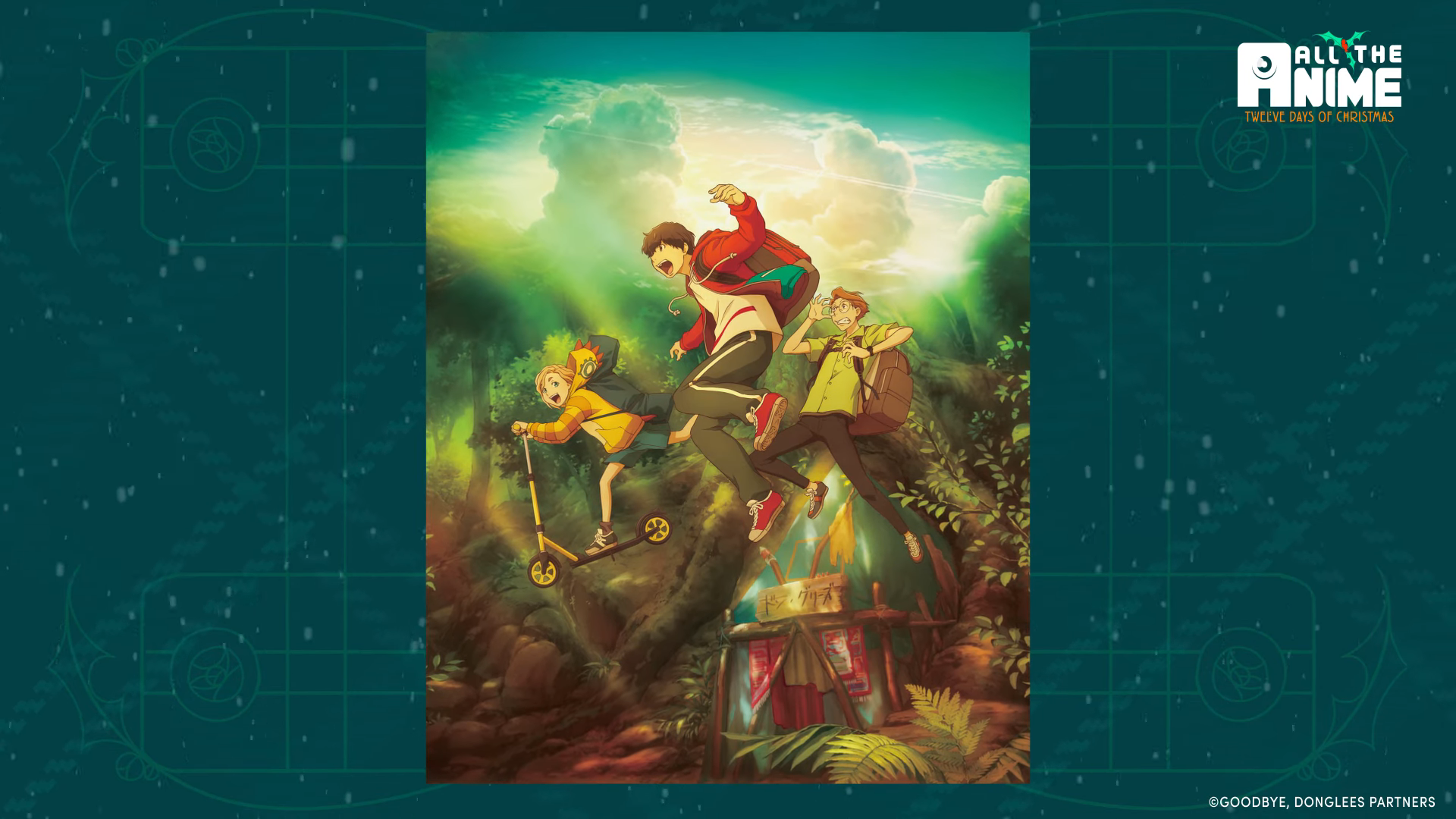 This year director Atsuko Ishizuka (known for their 2018 series A Place Further than the Universe) and studio Madhouse released an original theatrical anime film called Goodbye, Don Glees! which was also given a UK theatrical release by Anime Limited. Now it’s coming to home video as a Collector’s Edition Blu-ray.

Details on the collector’s edition set were not mentioned during the Christmas Showcase, though they have referenced the UK theatrical release which you can acquire tickets here.

Next, we have brand new license announcements! 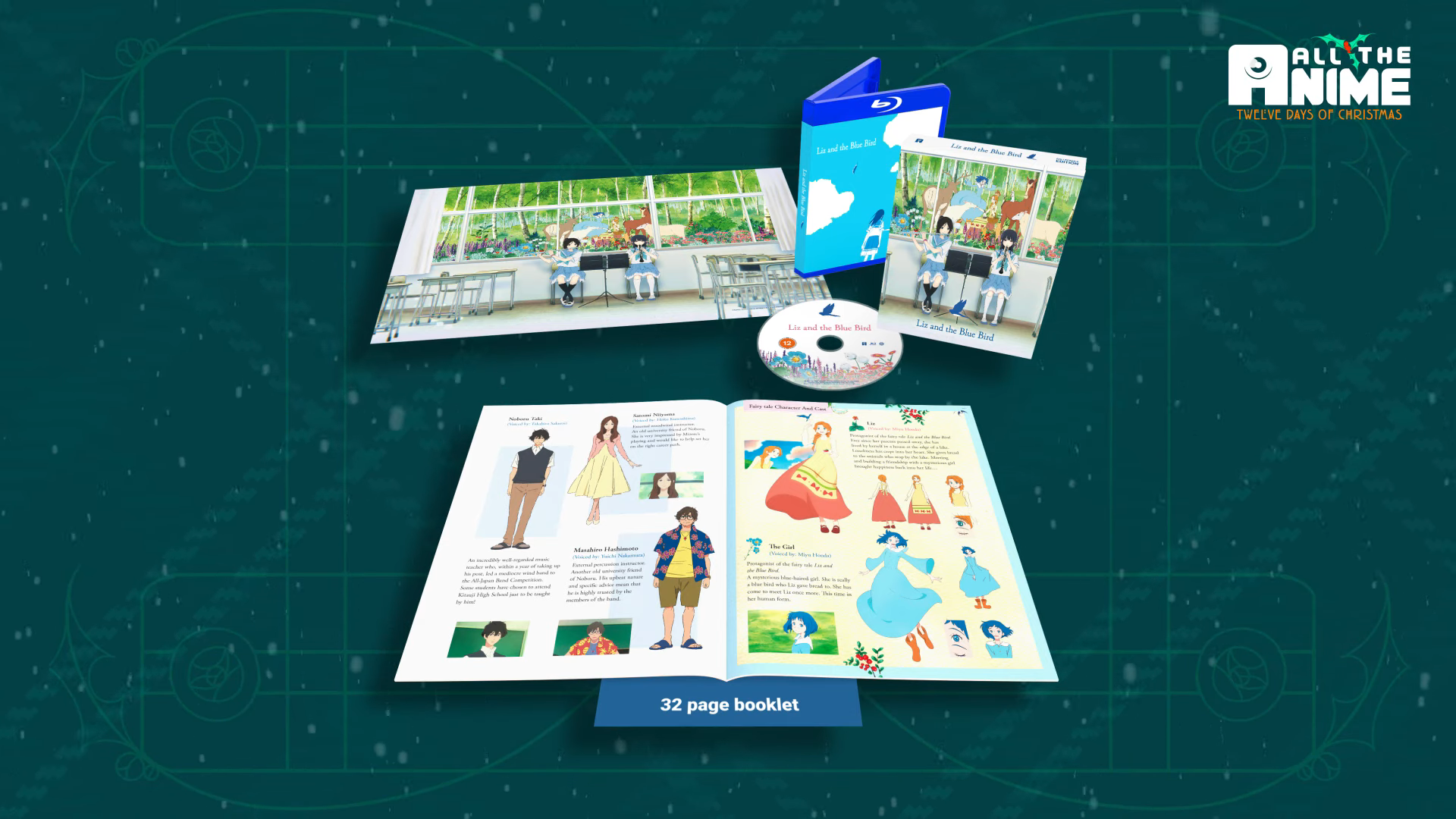 Liz and the Blue Bird

The original theatrical film spin-off of Sound! Euphonium is now finally licensed for the UK and will be released as a Collector’s Edition Blu-ray. Known in Japanese as Rizu to Aoi Tori, Liz and the Blue Bird is directed by Naoko Yamada and animated by studio Kyoto Animation, who also worked on the main Sound! Euphonium series. Despite being a spin-off, the film is standalone to the rest of the franchise.

The collector’s set includes a rigid box with an Amaray case packaging for the Blu-ray disc. Also included are a 32-page booklet with interviews and images of the film, and a poster. Japanese with English subtitles and NYAV Post’s English dub by Eleven Arts will also be included.

The discs will be based on the US release (authored & released by Shout! Factory on behalf of Eleven Arts) and therefore will use the theatrical master (upon review there are very little differences between the theatrical and home video masters, compared to previous releases like Fireworks and Mobile Suit Gundam NT). 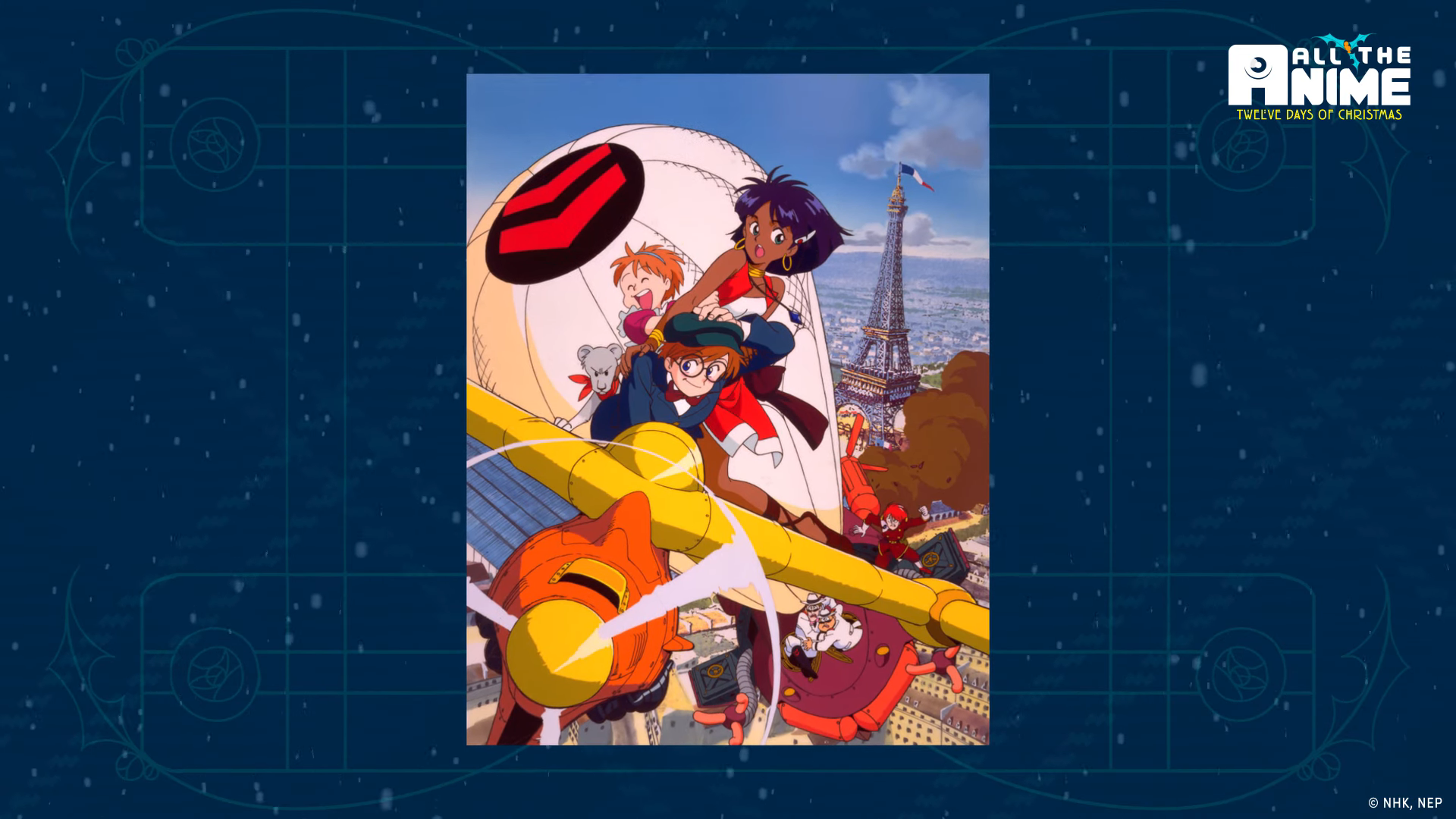 Nadia: The Secret of Blue Water

With the 2015 Animatsu Blu-ray release out of print and no longer available, the 1990 anime series Fushigi no Umi no Nadia by chief director Hideaki Anno, director Shinji Higuchi and studio Gainax is now returning to the UK by Anime Limited, presented as an Ultimate Edition 4K Ultra HD & Blu-ray combo pack.

The ultimate edition set will include over 200 pages packed with information, interviews, and artwork of the series. The infamous 4K transfer is the same one used for the North American GKIDS Blu-ray release. It is expected to be presented in Standard Dynamic Range like Future Boy Conan and Millennium Actress. Japanese with English subtitles and ADV’s English dub will also be included. 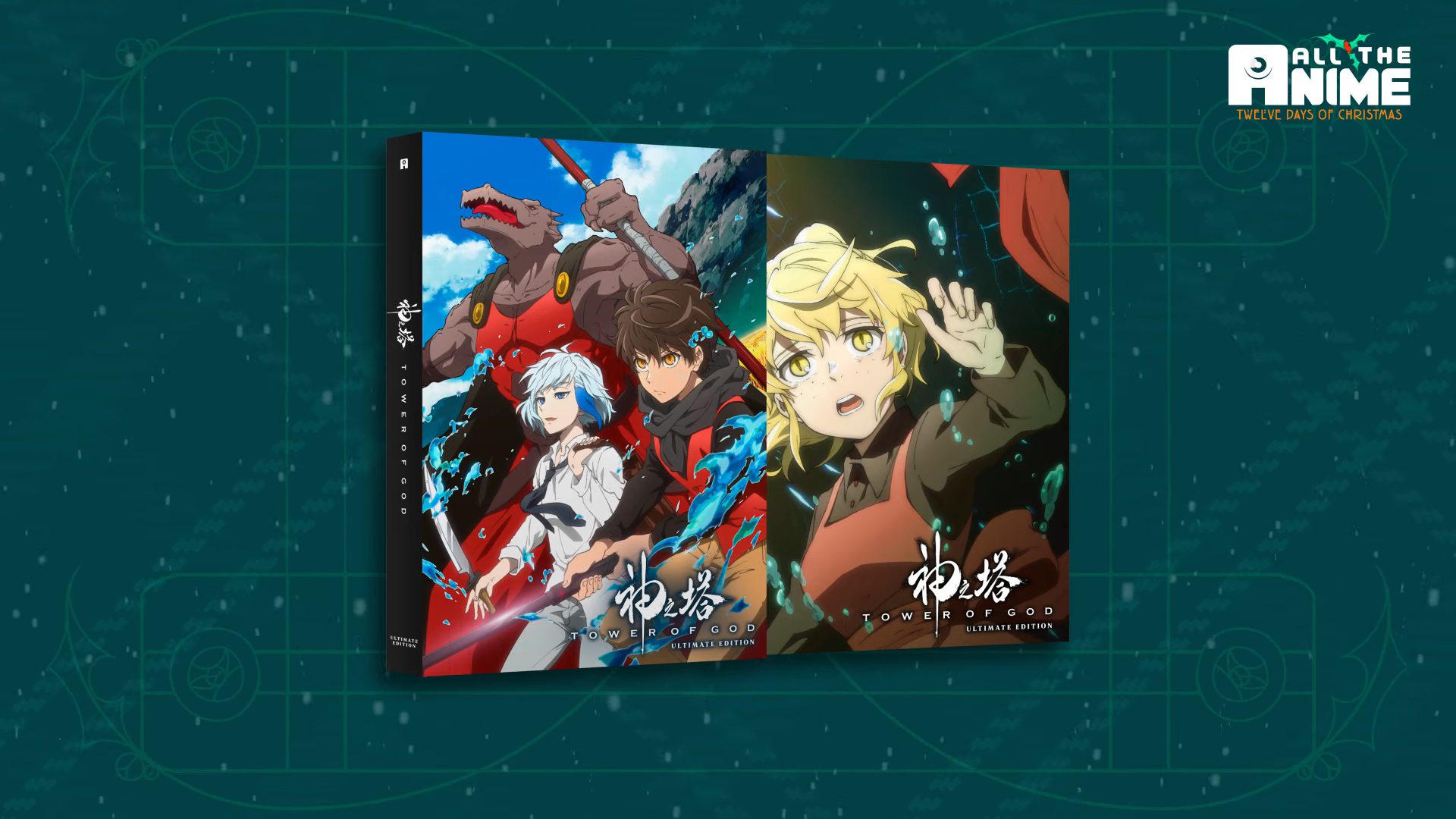 Based on the South Korean WebToon manhwa Sin-ui Tap (신의 탑) by S.I.U, the first television anime season of Tower of God from director Takashi Sano and studio Telecom Animation Film is now making its UK home video debut, also presented as an Ultimate Edition Blu-ray set. The series streamed on Crunchyroll as part of its ‘Crunchyroll Originals’ line-up in April 2020.

The ultimate edition set will include over 200 pages of artwork. No further details on the set’s packaging were mentioned during the Showcase, but the artwork shown is designed similarly to their Blood-C box set which was presented as a book. Japanese with English subtitles and Crunchyroll’s English dub will also be included.

The UK release will also have a new disc author, so it won’t be using either Viz Media’s infamous Blu-ray or Madman’s Blu-ray discs.

Last but not least, two of the early bird slots will be focused on Vinyl music. Anime Limited revealed one variant edition of an existing release, and another that is new. 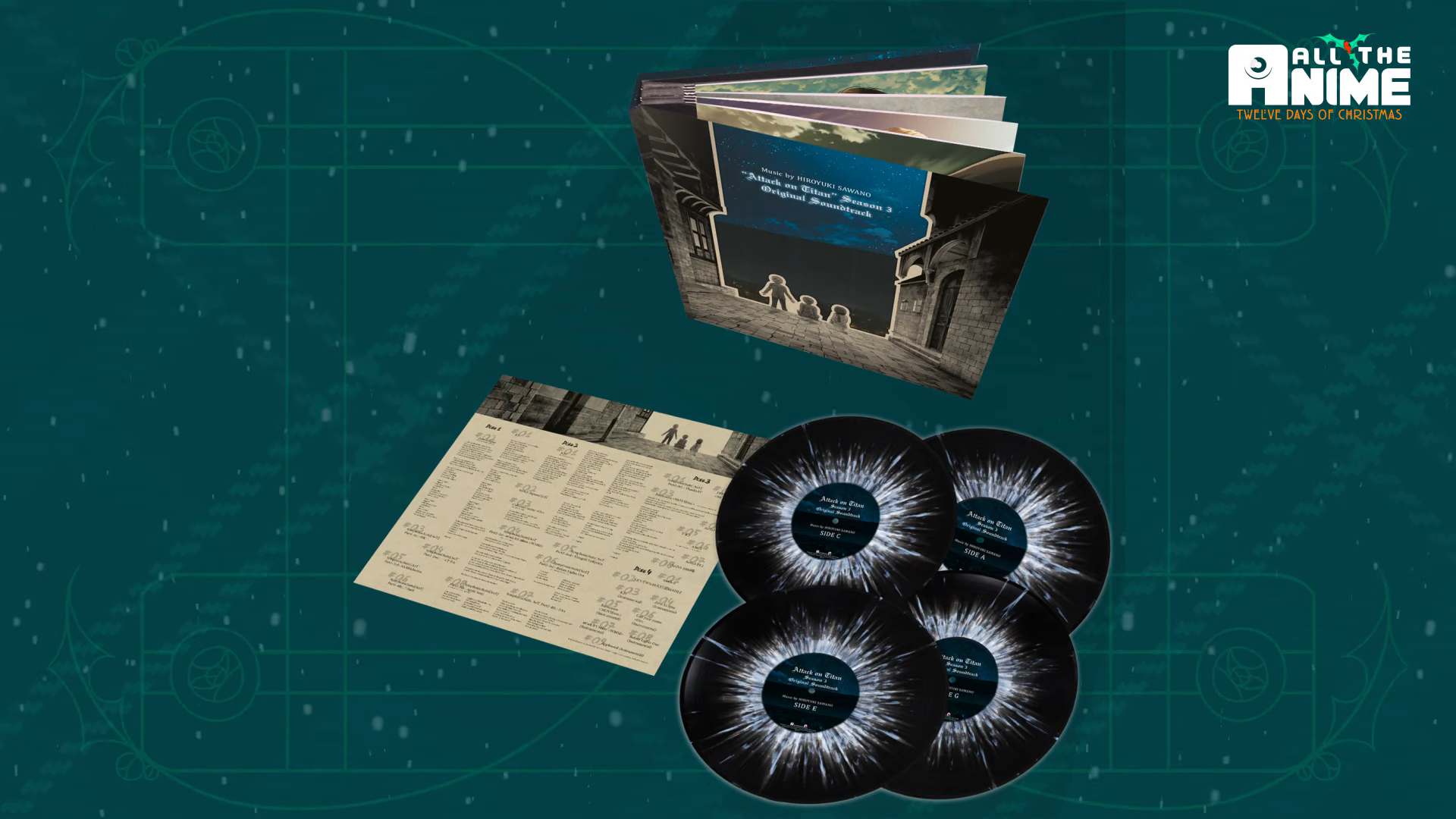 Earlier in the year Anime Limited released Attack on Titan’s Season 3 original soundtrack composed by Hiroyuki Sawano in a deluxe edition set featuring four 180-gram vinyl in deluxe edition packaging. This Christmas, Anime Limited will be offering a new variant of the release, while the rest of the content is the same as before.

Anime Limited revealed plans to release an exclusive variant vinyl for a compilation of music covers from Studio Ghibli and Joe Hisaishi’s works, which includes Castle in the Sky and Kiki’s Delivery Service and many more. No artwork was presented during the Christmas Showcase.

And that wraps up the line-up for the Early Birds that will be available at a discounted offer from 1st December to 12th December.

In the meantime, feel free to join our forum’s discussion in our dedicated thread which will also include predictions on the mystery boxes, MVM’s Christmas sale and more. 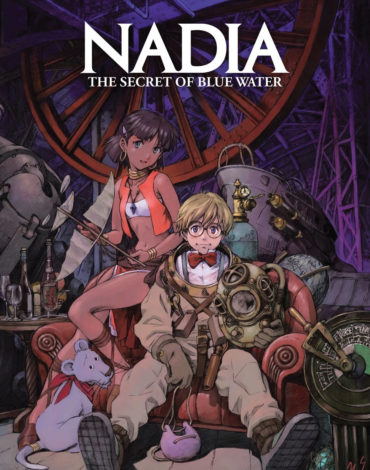