Samurai 7 came out in 2004 at what I’d call “peak Gonzo” as in the few years before, the animation studio had released the likes of Hellsing, Full Metal Panic! and Last Exile, shows that even now are still associated with them, and so releasing a new take on an all-time classic was an understandable idea from a company riding so high. They obviously looked at how Kurosawa’s Seven Samurai had already been turned into a popular Western, so decided to go in their own unique way with it by throwing in science fiction themes and a steampunk aesthetic, an idea that doesn’t always work, thanks to a mix of stunning painted backgrounds and really poor-looking CG objects, especially some of the spaceships shown when recounting a war that has recently come to an end. You can tell it’s the early 2000s, when companies are starting to use CG in their 2D animations but have yet to make it look anywhere near convincing. 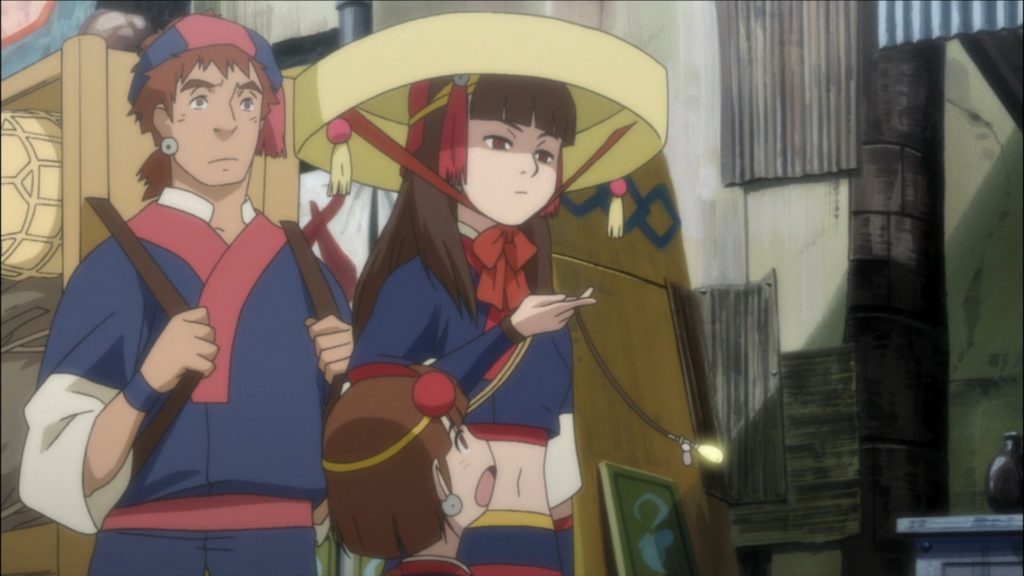 The key to the first half of the story is to redo the classic film, so we have a poor village called Kanna who must hire samurai to protect them from bandits, although in this case the bandits are called Nobuseri and they’re samurai from the previously mentioned war who have had themselves converted into machines and now blindly obey the evil all-encompassing empire that rules the land. So, a tad different! Kanna Village send out their Water Priestess Kirara and two other villagers to find some non-converted samurai to help them, with Kirara possessing a necklace that points towards pure-hearted individuals (as well as water sources, in case you were wondering about the Water Priestess thing). Over the course of the first few episodes, they hire seven samurai to help them, and they each correspond to one of the seven from the original film though often with even more exaggerated personalities or weird steampunk twists.

Kanbei is the lead samurai, the wise veteran of many battles; Katsushiro is the young samurai who wishes to learn under Kanbei; Gorobei the cheerful samurai who became a street entertainer after the war; Shichiroji is a samurai who has given up the life to settle down with a wife and new business who is nonetheless pulled back into the game by Kanbei and co; Kikuchiyo is a large and clumsy samurai with a short temper… and is almost entirely a robot (that bit doesn’t precisely match with the film…); Heihachi is the gentle samurai who much prefers building things to fighting; and Kyuzo is the silent and stoic samurai who starts off as an enemy. It’s a good mix though some of the basic character outlines lean way too heavily on the same few gags rather than developing them in any way, which gets old quick. 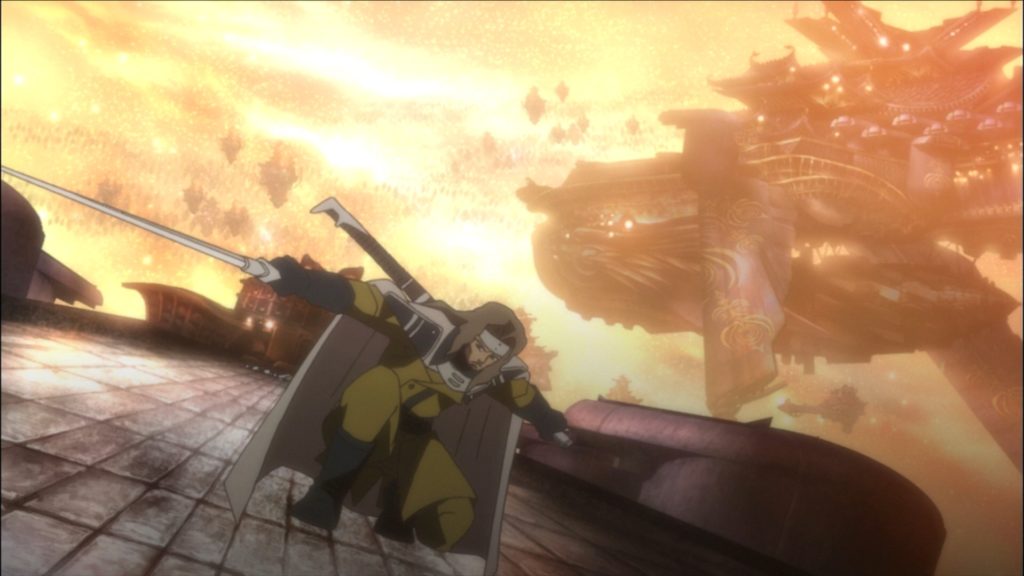 The surprise here is that really it’s only the first half/two thirds-ish that adapt the film and it goes off in its own direction for the ending, focusing on the previously mentioned evil empire led by Magistrate Ayamaro and his son Ukyo, the latter getting some surprisingly interesting plot twists. In fact its safe to say that Samurai 7 is a series that gets better as it goes along, being too reliant on often poorly timed comedy to start with but really goes for it as the series wraps up.

As mentioned, the visuals are a mixed bag. When it first aired it was apparently made a big deal of and put on an emerging HD PPV channel before eventually settling into a regular network showing, but honestly there are moments where this being your first exposure to HD animation would’ve led to you to tilt your head in confusion and wonder what the big deal is. Don’t get me wrong, there are moments where it has extremely fluid animation and really beautiful backdrops in the then-uncommon-for-TV 16:9 format but there are also moments where the opposite is true (well, apart from the aspect ratio, obviously). The soundtrack by Kaoru Wada and Eitetsu Hayashi is good and uses traditional instruments among other beats for that samurai vibe, even during the moments when they’re riding on spaceships, which was a fun sentence to write. Both language tracks are perfectly fine, though the English dub is very much of its time, being “early FUNimation” but thankfully not early enough that they played around with the script too much. Your extras are some commentaries from staff and actors followed by your usual trailers. 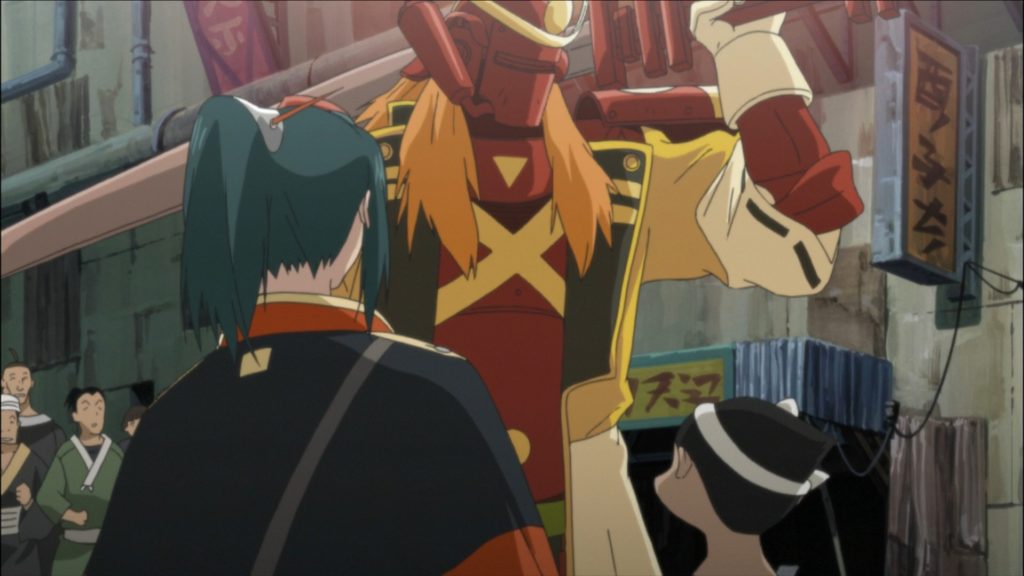 Samurai 7 is a fun series that starts off a bit shaky with some running gags that don’t really work but eventually develops into something good enough that you’re looking forward to the next episode. Maybe not a “must have” but definitely a “stick with it and it gets good”, it just depends if you’re willing to stick with it! 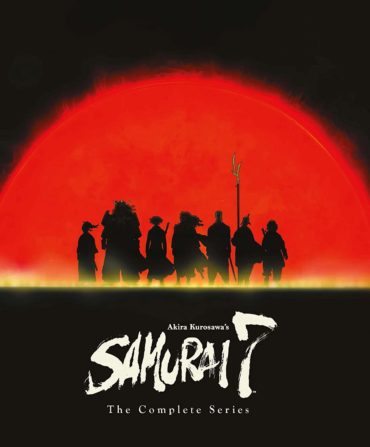 Does this 2004 anime series deserve more love in the year 2022? Or is it only held up by nostalgia for the rootin’ tootin’ good times? Find out in our review for the new Blu-ray release!