Back in 2004, an original anime from Gonzo launched onto the anime scene; the eye-catching visuals of western-inspired clothing mixed with a futuristic edge, plus the expertly placed fanservice, made Burst Angel a semi-big deal in the early 2000s. Even though the series never claimed cult status or made ‘favourite anime’ lists for big critics or publications, you can still see random images of the cast and its art style popping up in anime circles to this day. So, is it a series that deserves more love in the year 2022? Or is it only held up by nostalgia for the rootin’ tootin’ good times? Let’s find out!

In the near future, crime is at an all-time high with police seemingly out to exterminate the culprits, shooting first and asking questions later, rather than bringing about justice. With firearms much easier and now legal to obtain, many citizens of Japan now own one and many small groups of bounty hunters and mercenary agents have taken over the city of Tokyo. One such group is formed of Meg – red-haired with a big appetite; Amy – the tech wizard; Sei – the leader of the group and Jo – the expert shooter with a mysterious past. After hiring a new cook for the group by the name of Kyohei, they set off to do any job that pays, but end up accidently uncovering an ongoing mystery that threatens the future of Tokyo. 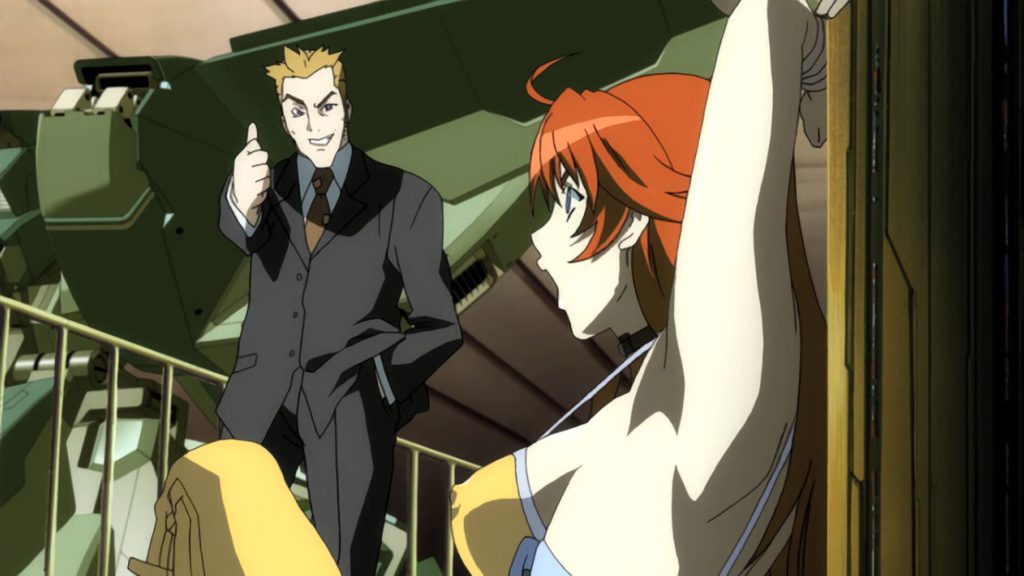 Burst Angel is 24 episodes long, plus one OVA which serves as a prequel, and it’s not based on any manga (there was a manga made AFTER the series finished, which also is set before the anime series). So Burst Angel is an entirely original story, one that mixes Wild West with future dystopia and lots of fanservice. The fanservice mention is not a negative in this context, just so we’re clear; to be honest, Burst Angel is at its best when it sticks to these attributes. When the series is leaning into its most clichéd and trope-y elements, it’s much more fun: the big action scenes, with heavy gunfire and mechas battling it out, are overall very well done. You can tell that Gonzo believed in this series and had the budget to make the action scenes big, exciting and explosion heavy. Even with the 3D animation, you can tell they tried hard to make it blend in with the 2D animation, there’s so many frames to each action that a lesser show would not have bothered with. Yes, the mechas are in 3D, which I know is not everyone’s cup of tea, but for what it’s worth, the action is well done. The character-centric episodes are also, for the most part, well executed. Again, when the show leans into its big, almost cheesy emotional moments and having characters go big with their drama, it works. Like the one-off episode, Episode 18 where a friend of Kyohei’s is revealed to be a cyborg who changed his whole body to help his yakuza gang, only for them to turn on him, is over the top but works, as it uses the inspirations the series is based on to their strengths. As for the fanservice, well if you’re not into fanservice then the cover of this Blu-ray is going to tell you where to stick it, ‘cos there’s a ton here, mostly around Meg but there’s also under-boob action from Sei’s character design and others as well. And there’s a beach episode, with all the cheesecake anyone could ask for. The character designs themselves are very striking; you can see why many people took to this show and why images of the main pair – Jo and Meg – pop up constantly on anime circles.

Where the series falls on its face, however, is when it tries to be serious and deal with heavy topics. Dystopian settings and Westerns can be a good set-up for darker themes but Burst Angel does not handle these very well at all, from the writing to the editing. For example, in Episode 16 we have Jo going up against a cybot with a mute samurai, but there’s a section where she’s being ‘forced’ to witness some memories and is supposedly traumatised by it. The problem however is that the editing is so bad (and it’s round about here where it’s clear the animation team were trying to save some budget) that the ‘memories’ are drawn out and go on for too long. Not helped at all that literally the previous episode, the beach episode, which ALSO served as a semi-recap episode, had long stretches of clips from earlier in the season, which look almost EXACTLY the same as the supposed ‘bad flashback’ in Episode 16. There’s also Jo’s back story, unoriginal as it is, that fails to hold your attention in the first half of the series because the show isn’t particularly interested in keeping the intrigue up, and when it does try to ramp up the importance and have scenes of child experimentation and evil governments, it’s not exciting or satisfying to uncover. The worst parts of Burst Angel are mostly boring and told better elsewhere, rather than outright bad or insulting, so you can still have some fun with the action and such in-between these low points as the series goes on. 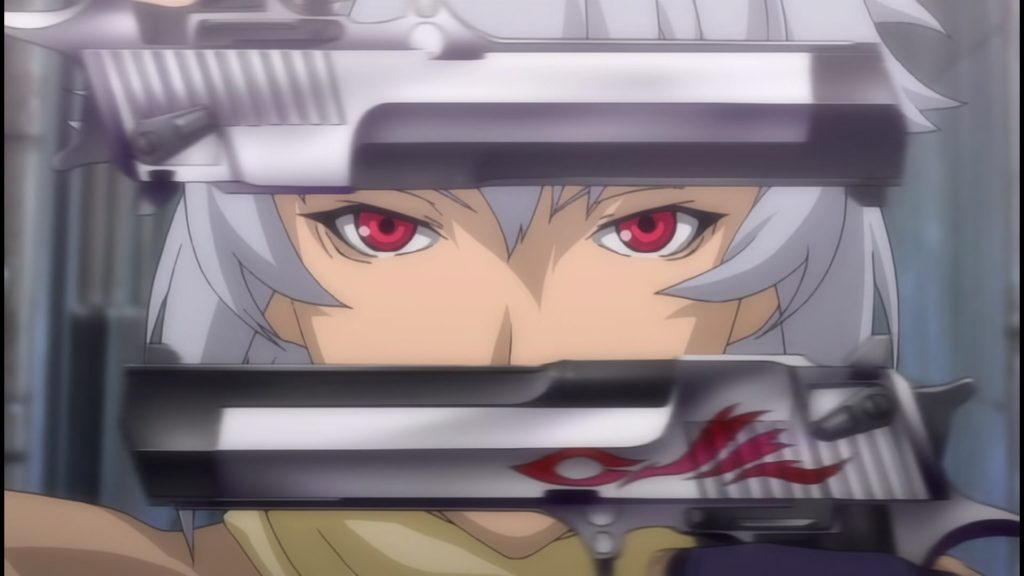 Despite its age, the animation holds up very well. It’s thankfully not an upscale of the original footage but a re-scan that looks really nice on Blu-ray (it’s a better picture quality to the upload currently on Crunchyroll, if that’s worth anything). There’s a weird animation error on Episode 20 where two of the female characters have the wrong hair colour, which should have been picked up, but it is a good-looking show overall. As stated above, the action and characters get a lot of attention with plenty of frames that help keep the pace of the action scenes and expressions of the heroes consistent, and the 3D even looks better than some modern shows if you can believe it!

The score is provided by Masara Nishida, and I’m surprised that they’ve not done much work outside of Burst Angel, with only a few credits like Hell Girl and Strawberry Eggs under their belt, because the soundtrack is really good! The composer mixes up traditional instruments to bring out the ‘western’ vibe of the show, with a mix of very synthesizer-heavy tracks; the tracks ‘Toshi Densetsu’ and ‘Shinjitsu no Kao’ in particular have a very ‘video game’ feel to them, but the mix-up works. The catchy opening track ‘Loosey’ is the love child of ‘Tank!’ from Cowboy Bepop and ‘Bomb a Head’ from Tenjho Tenge, again mixing up different genres and I can understand why many Burst Angel fans still love the track to this day. The ending theme ‘Under the Sky’ has a Japanese AND English dub version; it’s nice enough but overall, pretty skippable. Speaking of dubs, this set comes with English and Japanese dubs but there’s errors in both I need to flag up. In the English dub, within the first disc, there’s sadly a poorly aged gay-slur (beginning with P) in the first episode, and Episode 9 has some very stereotypical Chinese accent performances by Western actors…yeah, it’s an uncomfortable listen. The Japanese dub avoids both pitfalls, however in the OVA they (I’m going to assume) accidentally make a racist comment when Meg describes one black character with a ‘gorilla shaped mouth’, but the English dub avoids this entirely. So be aware when picking which dub you plan to go with when watching.

MVM’s lovely new Blu-ray released comes with six art cards inside a rigid box, and on-disc extras include audio commentary for multiple episodes across the series, but the third disc contains Japanese staff and cast interviews, English dub outtakes, textless songs, character features and many more. It also should be noted that the OVA is on the last disc, but if you select ‘play all’ it will only play the last four episodes of the show and NOT the OVA. You must manually select it in the episodes tab, annoyingly.

Burst Angel is one of those series I missed when it first came out and always wanted to know whether it was any good or not. Now that I’ve seen this lovely Blu-ray edition, I’m glad I watched it but can’t say I would go out of my way to rewatch it anytime soon. However, if the style or premise intrigues, you love some girls-n-guns or just want to upgrade your DVD copy, pick up this new Blu-ray edition now from MVM. 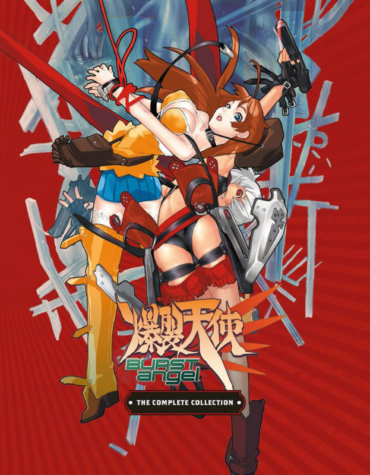 Samurai 7 retells the extremely influential Akira Kurosawa film Seven Samurai but changes the setting from Japan’s past to a weird mix of science fiction, steampunk and Japanese culture to create something entirely different – well, apart from the ‘small village hiring seven samurai to protect it from bandits’ part anyway. Does it work, though?

Some years into the future, the ready availability of firearms has transformed Tokyo into a violent and lawless place, where the controlling organisation of RAPT is little better than the very criminals it claims to oppose. Amidst all this, all Kyohei Tachibana wants is to do is go abroad and become a pastry chef; to … Continued