While Ishura may have topped the rankings in the 2021 edition of This Light Novel Is Amazing!, when the 2022 issue came out, the throne was stolen by a newcomer – Sasaki and Peeps. With an anime forthcoming, the light novel series has made its way West thanks to Yen Press, but does it prove an exciting read? Let’s take a look!

The story follows Sasaki, whose co-worker has recently adopted a dog and passionately tells anyone who’ll listen all about it. Feeling tired and unfulfilled with his life as a corporate slave and being in his late 30s, Sasaki decides it might be time to mix things up and adopt a pet of his own. His small apartment and long work hours don’t give him the leeway to take on a dog like his co-worker, but Sasaki hears that Java sparrows make perfect companions for someone of his position, so he sets off to the nearby pet shop to bring one home.

When Sasaki gets home he quickly discovers that the Java sparrow (which Sasaki calls Peeps) is actually a powerful mage from another world called Piercarlo! Peeps tells Sasaki that he has a talent for magic and if Peeps uses Sasaki as a middleman, then he can channel more of his magic too. Peeps can even use a teleportation skill to take Sasaki to his former world – an offer our protagonist quickly accepts.

As you may expect, the world Peeps comes from is one of swords and sorcery. Because people are so dependent on magic, technology hasn’t advanced very far which gives Sasaki the idea of selling things from Japan here in this other world. This leads to Sasaki making frequent trips between worlds, helped by the fact time passes so much slower. He can spend a couple of weeks in the other world and still show up on time for work in Japan afterwards. This also gives him plenty of time to learn magic from Peeps, although the teleportation spell frustratingly remains out of reach for now due to its difficulty.

If this was all there was to Sasaki and Peeps it would be interesting enough already, but there’s still more to the premise. Back in Japan, Sasaki witnesses a fight between espers and after intervening, is recruited to a top-secret task force that deals with people with powers. Of course, Sasaki doesn’t want to reveal anything about Peeps or the fact his power is actually magic, so he goes along with his new boss and pretends to have the singular ability to wield water.

There’s also a subplot about a Magical Girl (?!) which we never quite get to the bottom of and another about the neglected middle schooler who lives next door to Sasaki and dreams of making love to him to get away from her abusive household. We’re told in a monologue that Sasaki has tried calling social services about the situation and otherwise tries his best not to interact with her too much, in case someone notices and decides he, as a single adult man, is a danger to the girl. Nevertheless, she’s attached to him and even just the small talk they make is more than enough for her fantasies to grow, unbeknownst to our protagonist…

So at this point, I think it goes without saying that Sasaki and Peeps is a combination of ideas that could make up several different series all by themselves. While I like the central premise of travelling between worlds, I admit the esper storyline in Japan felt like it came out of nowhere and author Buncololi doesn’t do a good job of delivering a satisfying conclusion to it either. It’s pushed aside almost as quickly as it was introduced when a crisis arises in the other world, which serves as our dramatic ending to Volume 1.

The Magical Girl storyline may or may not tie into one of the existing storylines, so I’m reserving judgement on that for now. The girl next door storyline is more problematic and takes away from the rest of the book just through virtue of being so unsettling. I was more or less on-board with this one until one of the side chapters (told from her perspective) revealed she wanted to sleep with Sasaki and then I instantly checked out. I pray this one doesn’t continue to go down this road in the following books, especially when the author set it up quite well by showing us that Sasaki is aware of the implications of being seen with a middle schooler and called the relevant organisations to help her (if only other protagonists were this sensible!).

Despite the hodgepodge of ideas, I came away from Volume 1 having enjoyed my time with it, which is perhaps what matters most. Despite there being several female characters on the front cover, there’s no romance here (outside of the neighbours’ delusions anyway) and no sign of a harem which so many of these fantasy titles fall into. Sasaki and Peeps make for an interesting duo to lead us through the story, not least because Sasaki is far more mature than the protagonist of these tales usually is. And when I say that I’m not even referring to his age but simply the way he approaches the world around him, there’s an air of maturity and sensibilities which is rare in this genre.

While I criticised Buncololi for not juggling all the storylines very well, I wouldn’t say they’re not a talented writer. When focused on one single thing Sasaki and Peeps is well written, with scenes that are easy to follow and detailed enough to be interesting but not bog down the reader. Things move swiftly and are easy to enjoy. It’ll certainly transition well to anime! So with that in mind, I have to wonder if some of the problems with this book come from it being a web novel, something that haunts quite a few of these releases as of late unfortunately.

Sasaki and Peeps Volume 1 comes to the West thanks to Yen Press where it has been translated by Alice Prowse. Prowse has done a good job of giving a big cast of characters easily distinguishable voices, as well as Sasaki and Peeps who come from different worlds and wouldn’t use similar words or phrases. Illustrations for the series have been handled by Kantoku (A Sister’s All You Need) and there’s quite a variety of colour images at the beginning that capture the different elements of the series well. There are ten pages of character profiles at the back of the release too, which is nice to have – although it does highlight the fact Kantoku is better at varying the female side of the cast as opposed to the guys who all look very similar.

The series is ongoing in Japan with six volumes, while here, Yen have already released #2 in English, with #3 following later this month. They’re also releasing the manga adaptation which I’ll be reviewing in the future, so keep an eye out for that if manga is more your thing.

Overall, Sasaki and Peeps Volume 1 is filled to the brim with ideas and while it doesn’t juggle them particularly well, it’s easy to see how it’s found an audience for itself. When author Buncololi focuses on one element the writing and characters draw you into the world and ensure you have fun. If you’re okay with some rough edges this one is certainly worth adding to your collection, but otherwise, maybe wait and see how Volume 2 fares. 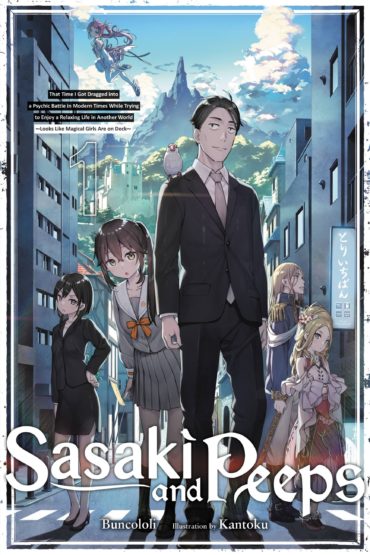 Title
Sasaki and Peeps Volume 1: That Time I Got Dragged into a Psychic Battle in Modern Times While Trying to Enjoy a Relaxing Life in Another World: ~Looks Like Magical Girls Are on Deck~