Mitsuha Miyamizu is a young girl living in the countryside, desperate to escape her mundane village life and experience the wonders of Tokyo. Her wildest dreams seem to come true when she suddenly wakes up in a Tokyo apartment inside a boy’s body – a boy who just happens to have the ideal busy life with school, friends, a love interest and waiter job. When she goes to school the next morning, she discovers from her friends’ reactions that it was not a dream at all, whilst she was off parading around Tokyo, a boy by the name of Taki Tachibana was inside her body back at her village, interacting with her friends and family. Shocked by the sudden turn of events with seemingly no way of stopping the random body-switching days, the pair establish a few ground rules to cope with the sudden change and as they begin to learn more about each other, a drastic event threatens to tear them apart forever.

Director and writer Makoto Shinkai has been hailed as the ‘new Miyazaki’ in many publications and reviews, especially of late since Your Name topped the Japanese box office just 28 days after release, becoming the highest grossing non-Studio Ghibli and non-series- related anime film to earn over 10 billion yen. With the Western world’s limited scope for comparison when it comes to Japanese animation directors and Makoto Shinkai being a Ghibli fan himself, it’s easy to put two and two together. But what has struck a chord with Japanese audiences in Your Name? And is the ‘new Miyakazki’ tag warranted? Mr Shinkai already has a variety of films under his belt, as well as novels and manga. From the fantasy- driven Journey to Agartha to the more down-to-earth stories such as Garden of Words, there’s no doubt that he’s a talented storyteller, with Your Name not only exhibiting many elements of his previous works but creating a whole new heart-warming tale in the process for a new generation of anime fans.

At the core of this tale is the tried and tested ‘body switching’ trope which is a common device in fiction from literature to TV to films, the latter’s most famous example being Freaky Friday, where a mother and daughter swap bodies for a certain amount of time. It’s often played for comedic effect with the actors involved hamming up their physical and/or voice performance to convince the audience of the change, and by the end of the experience it’s the age-old lesson of ‘walking a mile in each other’s shoes’ to understand each other better. Your Name is ripe for such hilarious comedy as it’s a boy and girl swapping bodies but Makoto Shinkai avoids a lot of the trappings and recycled morals, instead creating something new and innovative. That’s not to say it avoids comical beats entirely, both protagonists are incredibly curious about their ‘new’ anatomy when they wake up in the opposite sex’s body, and whilst there is a recurring gag of Taki being very aware of his new cleavage, he doesn’t perve over it as other anime have done before. The comedy comes from a more natural and relatable place; for example, when Mitsuha is in the male body she’s completely comfortable talking with the older female Miki and oblivious to the change in dynamic between the pair, whilst Taki has to deal with the sudden new attention he’s getting from her and the brunt of the jealous male co-workers as a result. Another shake-up of the trope is the time the pair exchange bodies; a lot of body swapping stories have the infected pair stay in their respective forms until they learn their lessons, whereas in Your Name it happens at random intervals. Not only does this prevent the body swaps from becoming boring but allows for the characters to experience the aftermath of the previous day (with entertaining results) and appreciate the time they have in their own skins. Then when they suddenly wake up elsewhere, picking up pieces of someone else’s life for better or for worse serves as a perfect catalyst for some very emotional and tension filled scenes in the second half. Also, because the first switch happens whilst they’re sleeping, they naturally think it’s a dream and act spontaneously, believing that there will be no consequences for their actions. When the sequential swaps occur, they change how they handle their situation and work together as they go along. It’s a very humane approach to an overdone plot device.

Most body swapping stories avoid officially explaining how the actual process works; Your Name is no exception, starting the film with the very first time it happens and failing to  explain it later on, even when more fantasy elements come into play during the story. But among the likes of The Girl Who Leapt Through Time, the lack of scientific explanation does not detract from the enjoyment of the film; it’s an emotional journey that brings the audience into the concept and keeps them there, especially a third of the way in, when the first twist occurs. To avoid as few spoilers as possible: emotionally it hits you, as if a piano has been dropped on you, very suddenly and unexpectedly (considering the light-hearted lead-up) and in a lesser movie it would be unwarranted or too abrupt to carry forward, but this comes hand-in-hand with the change in focus of protagonist. The first third of the movie is mostly from Mitsuha’s point of view; a scenario born from a wish she makes on a whim as part of an expressive outburst, so as a result we see her having the time of her life in Tokyo and not thinking about the long term plans. Then it switches to Taki, who didn’t ask for the change and takes longer to accept his new weird situation. However, he’s more mature and it’s his desire to learn about the body he inhabits that brings the movie to a grounded space when he discovers more than he bargained for. The last third switches between the two and blends the two moods together, resulting in a rollercoaster ride of many emotionally charged highs and sudden stops for quiet moments that will pull on the audience’s heart strings for a glorious finale. The continuous up-and-down emotional spikes in the final act may have been stretched too far once or twice (the film runs to 107 minutes) but it’s to help wrap up the last elements of the story, rather than force another flood of tears from the audience. Building that heart-pulling connection however comes naturally, due to the protagonists; the two teens are very relatable in different ways because of her enthusiasm and his curiosity. They react naturally to an unnatural situation, and you want them to succeed in finding themselves and each other, as well as laugh along when the moment calls for it.

Animation is provided by CoMix wave Studios, who have produced most of Makoto’s work so Your Name looks very similar to his previous films. Although visually it’s not as striking as Garden of Words, the animation for the lead characters is where it excels; the body switches are revealed through body language and facial expressions before a single word is spoken. From the small hand gestures to big reactions; it’s the little details here and there that really bring the whole premise and emotional core of the story together.

Japanese rock band Radwimps provide the score with mixed results; although the actual score is delightful that ranges from low key, to playful, to heart-breaking when the movie switches gears, the vocal tracks are more of a distraction than an addition to the experience. The songs themselves aren’t bad but feel shoehorned into the film, as if the band were promoting an album rather than the movie. This is especially true of the opening track which plays over a mini-trailer edited opening that’s more like a music video than part of the film.

Your Name is a delightful movie, gorgeously animated, that takes a wacky, unbelievable concept and shapes it into a genuinely thoughtful story, filled with relatable characters and emotional highs. It’s one not to be missed when it arrives in cinemas.

Your Name will be screened as part of BFI’s London Film Festival 14th – 16th October. In cinemas across the UK from November 24th. 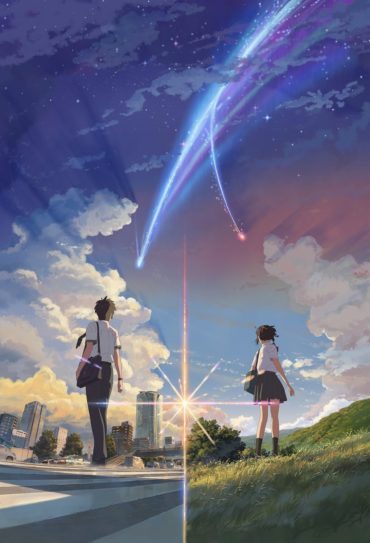 The promotional image for this film makes it look as if this would be your standard group magical adventure but little did I know that Aura: Koga Maryuin’s Last War is much more down to earth than that and leads to an enjoyable but flawed film. Aura is directed by Seiji Kishi whom some might recognize as the person … Continued