Located on the outskirts of Tokyo, Hachimitsu Academy is a famous all-girls bordering school, known for its high standards and well-behaved students – but this is all set to change once boys are allowed to enroll. In the first semester, a mere five boys are accepted into the academy: Kiyoshi, Shingo, Jo, Andre and Gakuto, but they are quickly shunned by the rest of the school. Unable to get through to the girls, the boys soon set their sights on something much more dangerous: peeping into the bath! The plan soon goes awry, however, and the boys abruptly have their freedom snatched away by the ruthless Underground Student Council, and find themselves thrown into the school’s prison, where the motley crew will face a struggle that will test the bonds of friendship and forge a perverted brotherhood! 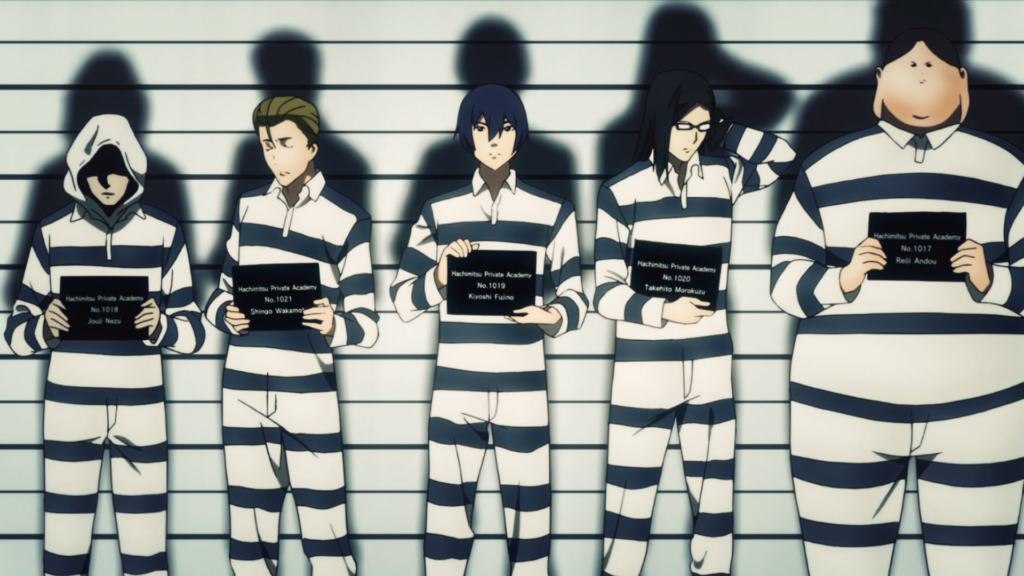 Of all the many genres and subgenres in anime today, I feel the one that is the hardest to get right is the ecchi-comedy. At this point, it has to be the most trite, generic and predictable kind of anime around, not to mention they’re a dime a dozen, so for an ecchi-comedy to be any good, it has to really do something new, fresh and creative, which is exactly where Prison School, based on the manga by Akira Hiramoto, fits in, easily being one of the best shows in the genre that I’ve seen. 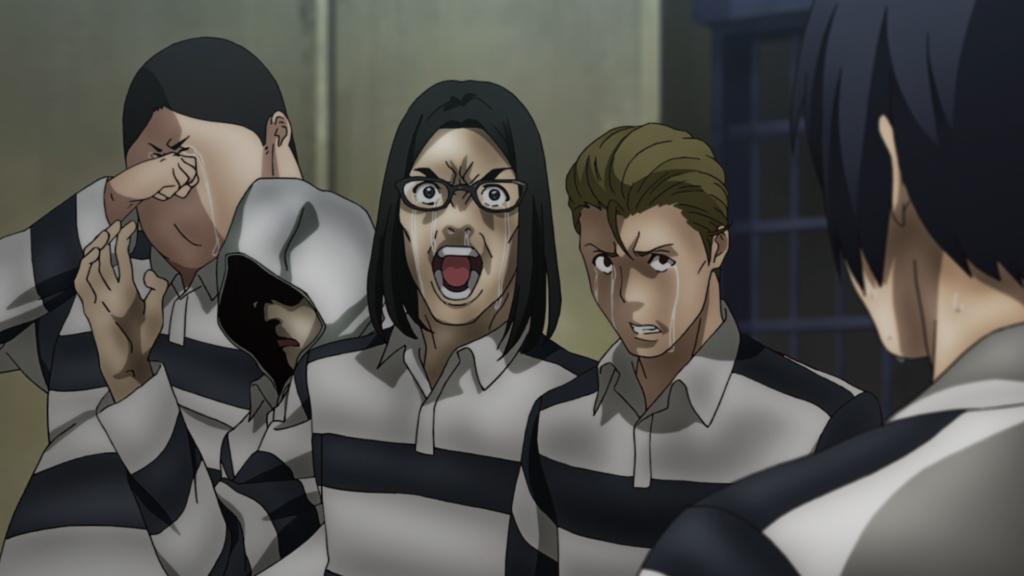 What makes Prison School work so well is that not only does it succeed as an ecchi series in its own right, but it also manages to be a total subversion of the genre too. This isn’t an anime where the protagonist accidentally knocks a girl over and ends up with his head up her skirt or walks in on the girls bathing or in various states of undress, instead, it throws all of the clichés out of the window in favour of doing something wholly original: putting the girls in charge. Instead of being glorified sexual assault victims, the female characters in Prison School are sexually charged of their own volition, being the prison wardens of the male inmates, and going so far as to use their own sexuality in an attempt to take advantage of the boys’ perverted natures to further their own plans, which is refreshing. It is incredibly rare that you see a female in a show like this in a dominant role, so the focus on that aspect alone is enough to put it above most of the ecchi tripe that I’ve watched. There are cases of needless nudity and some questionable camera angles, but it’s still ecchi at the end of the day, so I can let it slide. Now, whilst you could make a similar arguments for J.C. Staff’s other female-led perverted comedy Shimoneta, what sets it apart from that disaster is that Prison School is actually funny. 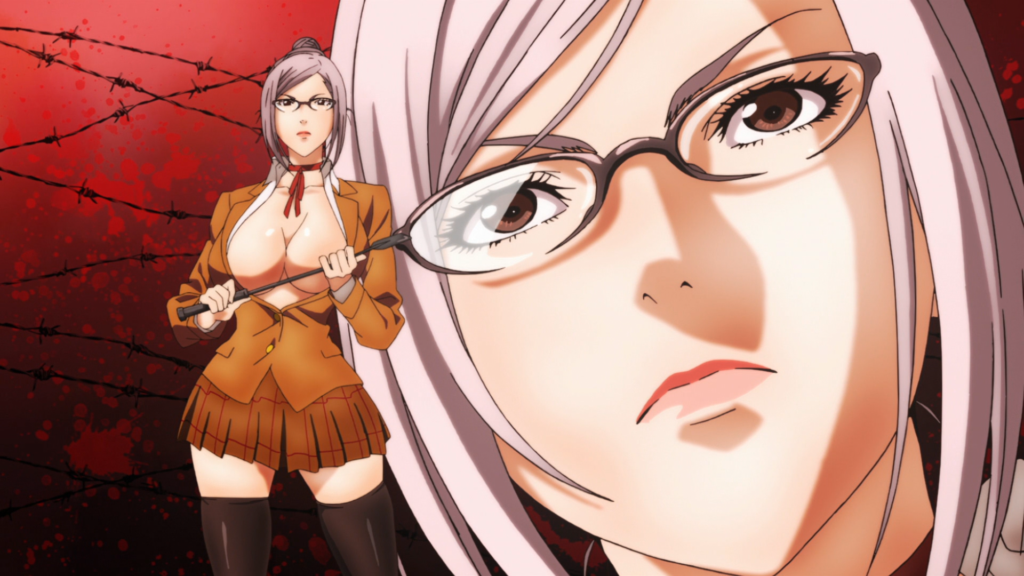 Despite this type of show not exactly being in line with my sense of humour, even I must admit that Prison School is a very funny show. You can totally ignore the whole inversion angle I mentioned and it still functions perfectly fine as a comedy that fans of ecchi will love. I said similar things about No-Rin, but this show really does take the cake in terms of boundary-pushing comedy, to the point where you wonder how it they managed to release it uncut. As opposed to simply relying on saying sexual words or making awful puns (barring a pun which was genuinely funny, and one of the best uses of the dreaded c-word I’ve ever heard) like the previously mentioned Shimoneta, Prison School comes up with absurd situation after absurd situation, that even if you don’t find it laugh-out-loud funny, you can at least appreciate the sheer ludicrous fun that most of the comedy set piece scenes have. I’ve never seen a plotline centering on a golden shower before, and I’m not sure that I ever wanted to, but the fact that Prison School makes it work so well is a testament to the quality of the comedic writing on display. Not content with a single kind of humour, though, Prison School also has plenty of surprisingly violent slapstick, which sometimes got more of a big a laugh out of me than the lewd stuff, and some grotesquely hilarious reaction faces. 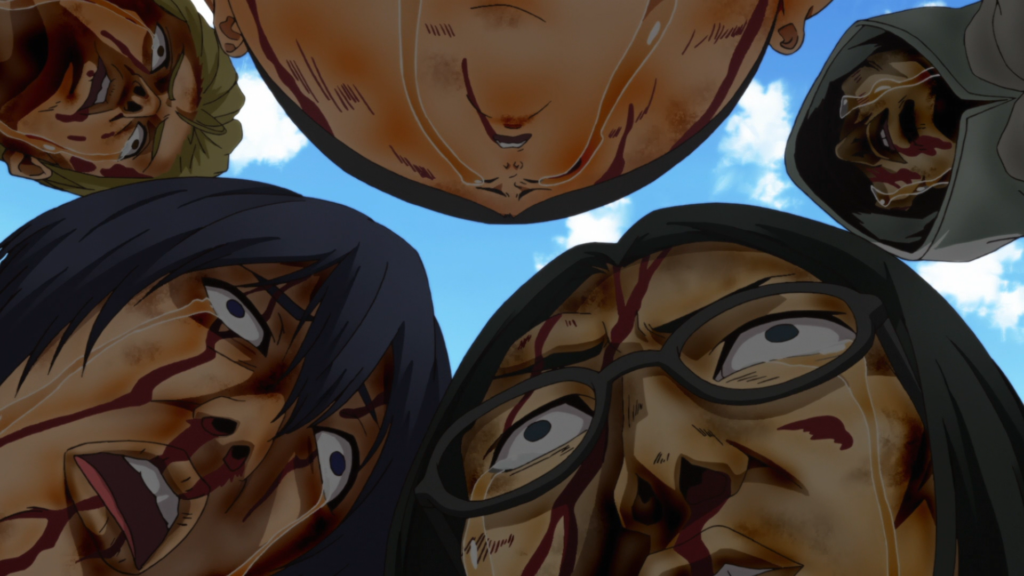 The most unexpected part of Prison School is almost certainly its characters, which by the standards of the genre, are quite good. Both Gakuto and Shingo go through some sort of development during the series, learning about the values of friendship and trust, which seems to be a prevalent theme throughout as we see the prisoners learn to work together and coordinate their escape. Even those that don’t get much in the way of depth are at least memorable, such as the masochistic Andre or charismatic Kiyoshi. The weak link amongst the inmates is Jo, whose only defining characteristic seems to be that he likes ants, which unlike Andre’s masochist tendencies, doesn’t add much to the comedy and just comes across as odd. Despite the women having a dominating role within the story, their characters are disappointingly one-note and definitely could have used a bit of fleshing out. The closest they come to this is Meiko, who seems to have feelings for Mari, the Underground Student Council President, but this doesn’t amount to anything. What’s worse are the love interests, Chiyo and Anzu, who are almost entirely defined by their attraction to Kiyoshi and Shingo respectively. The romance itself is weak too, with even the plot forgetting about it in the finale, as there’s no resolution or wrap up. I am told this is remedied in the OVA, but Anime Limited’s release doesn’t include it, unfortunately. 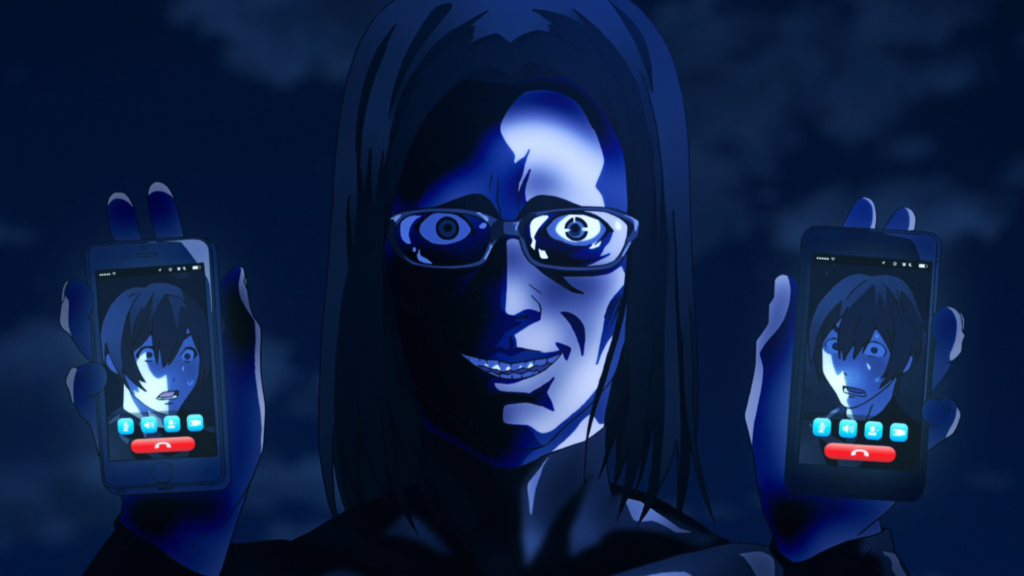 Though it’s slightly outside of their usual wheelhouse of rom-coms and fantasy shows, J.C. Staff (Toradora, A Certain Magical Index, Is It Wrong To Try and Pick Up Girls in a Dungeon?) do a fantastic job in almost perfectly recreating the style of the manga in anime form. When you compare it side-by-side with the source, there isn’t much in it, and you can’t ask for much more in an adaptation. They especially nailed the overly detailed reaction faces, which never failed to get a laugh out of me. 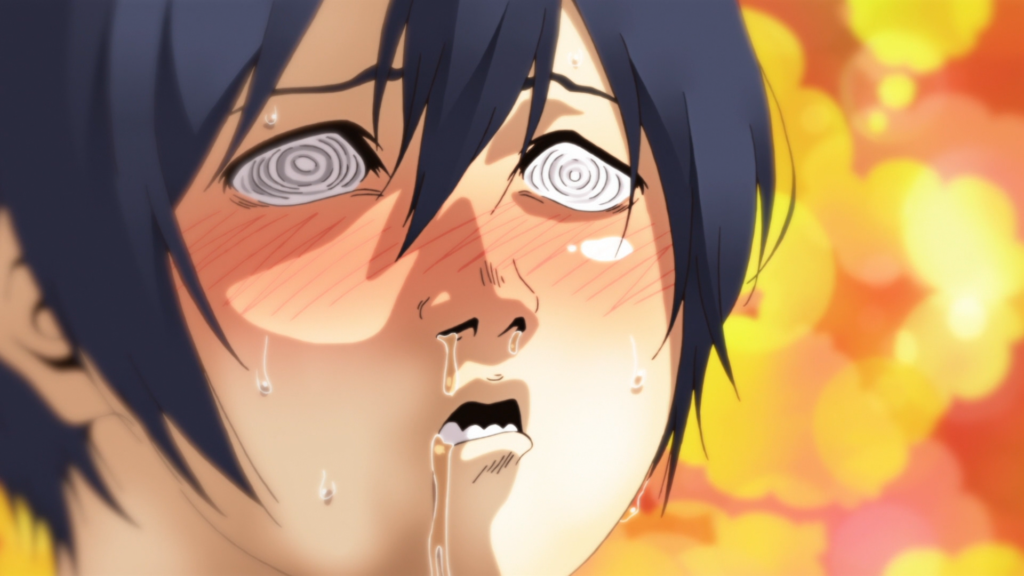 The English dub for Prison School is pretty fantastic, featuring a cast of solid and recognisable voices from the Funimation stable, including Austin Tindle (Tokyo Ghoul, My Love Story), Eric Vale (One Piece, Noragami), Christopher Bevins (The Heroic Legend of Arslan, Fullmetal Alchemist Brotherhood), Alexis Tipton (Heavy Object, Overlord) and Tia Ballard (Little Busters, Fairy Tail). The stand-out for me was Sonny Strait (Assassination Classroom, Dragon Ball), who has this weird, indescribably odd voice for Andre, that matches his equally bizarre character design to a tee. If listening in English is too embarrassing with others in the house, fret not, because the Japanese dub also features high quality voice actors, including Monogatari Series alum Hiroshi Kamiya and Kana Hanazawa. The opening to Prison School, ‘Ai no Prison’ sung by the Japanese voice cast, is an upbeat and catchy metal song that sticks with you, much unlike the totally forgettable soundtrack to the show, provided by Kotaro Nakagawa. 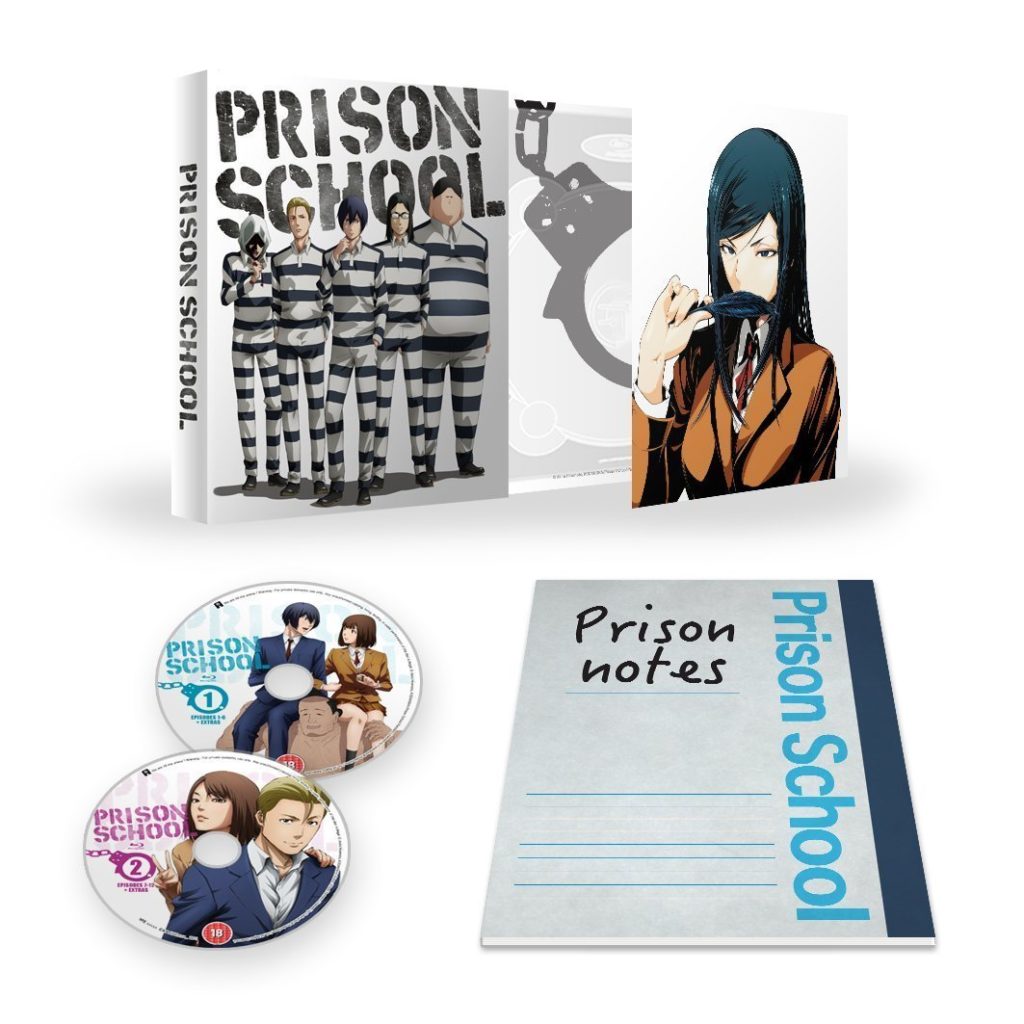 Anime Limited’s Collector’s Edition release includes the whole series (minus the OVA) in a high quality artbox, with a lovely 40 page booklet, including an episode guide, character biographies, plenty of art and an interview with the director and a spectacular, eye-popping lenticular of Meiko that adorns the back of the box.

Amongst the piles of ecchi garbage that exists, Prison School stands out as a diamond among the rough. I don’t think it will be enough to convince people totally turned off by the genre, but for those who do like it, it’s a real treat and unlike anything else out there. 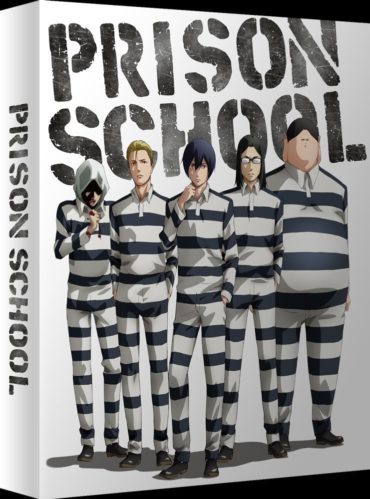