UPDATE for United States as of 14th March 2018: Netflix will be making Violet Evergarden available for US territory starting 5th April 2018.

UPDATE as of 3rd January 2018: We have updated the article after digging a bit deeper into the matter when we published this post. See below for the new updates!

One of the many titles coming exclusively through Netflix, it has been revealed that the latest Kyoto Animation series Violet Evergarden might be available sooner than we had anticipated. 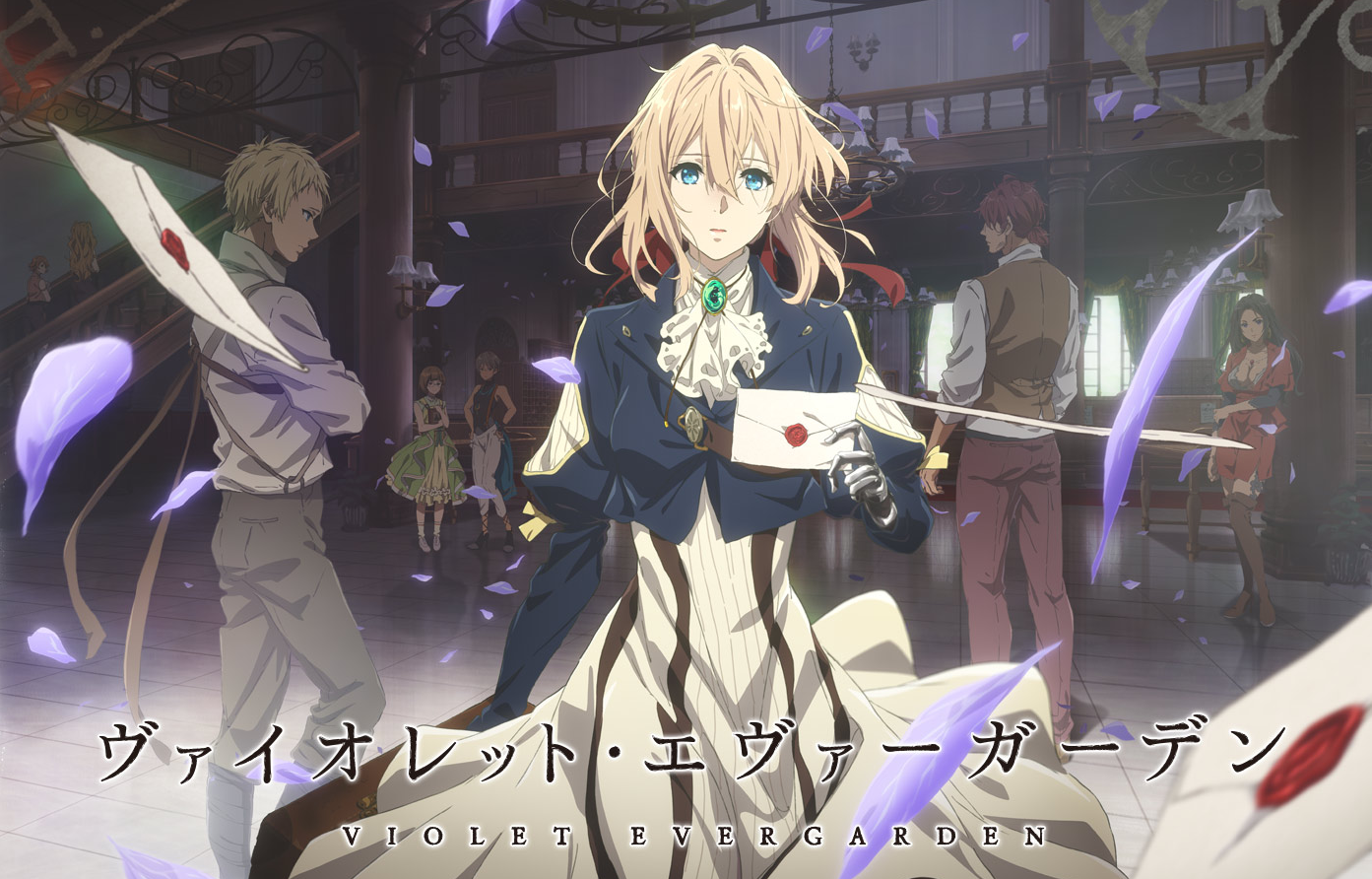 While slated for Spring 2018 outside Japan, the series has been listed for 11th January around the same time as the Japanese broadcast airing date. Assuming this is going as planned it is expected to be a weekly simulcast just like a fair amount of other titles that Netflix have done in the past, most notably Star Trek Discovery for the UK & Ireland.

So far the following territories have the series listed for 11th January while United States and Australia apparently do not:

Netflix have confirmed Singapore will be simulcasting the series. The show page is available which you can view here.

UPDATE (2nd January): The UK Netflix page has been updated with a new visual and also an English subtitled trailer. 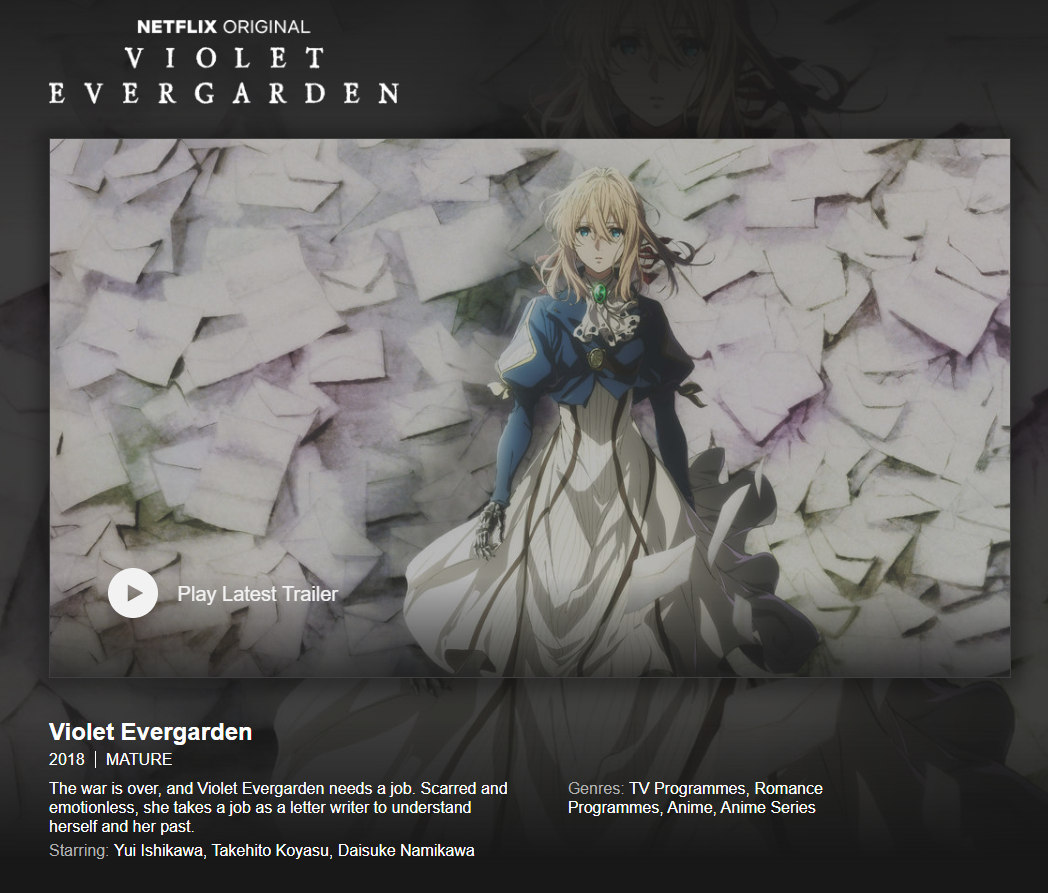 UPDATE (3rd January): Netflix have E-Mailed folks about the arrival of the series. Another sign of its potential appearance. 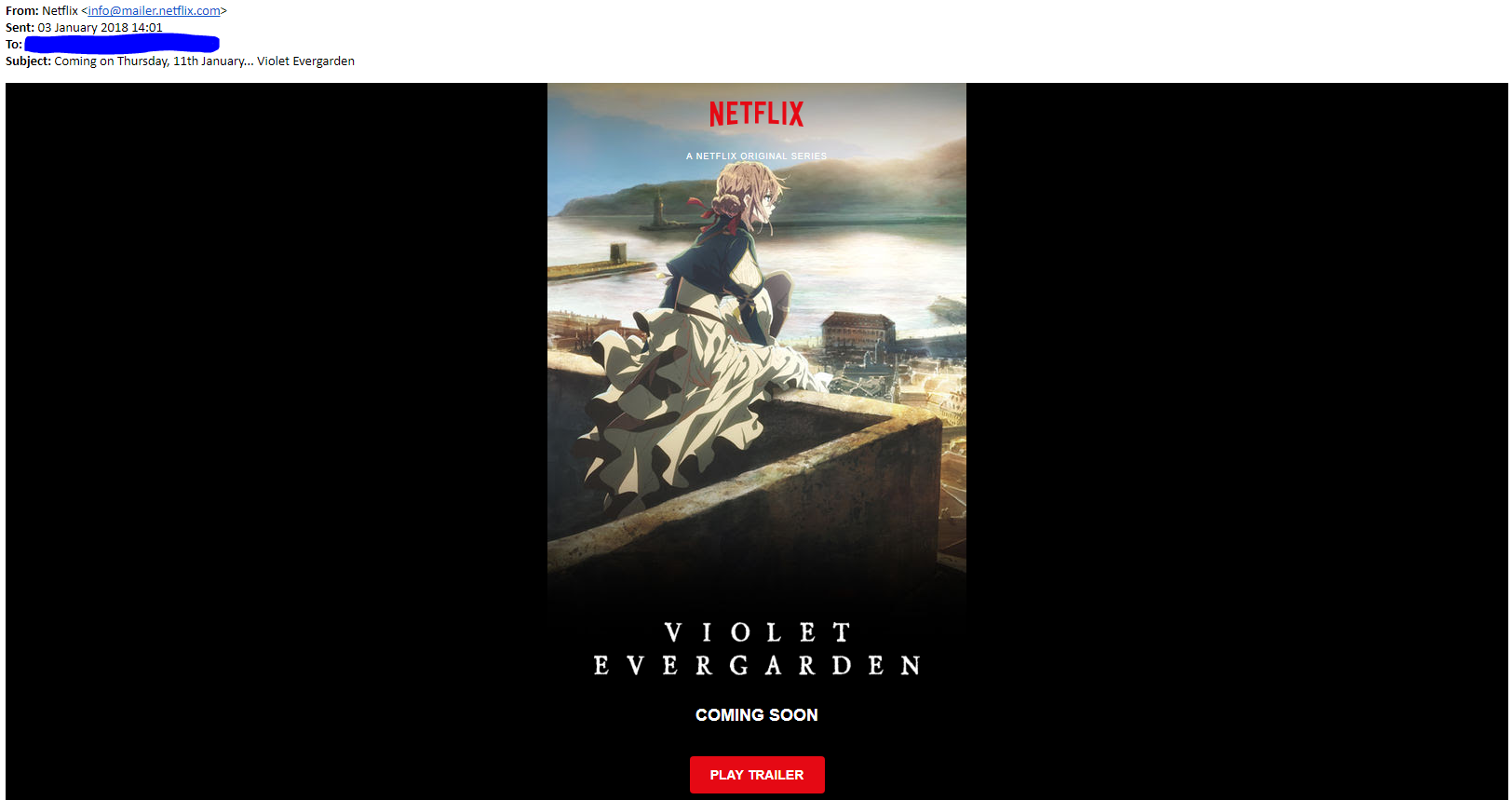 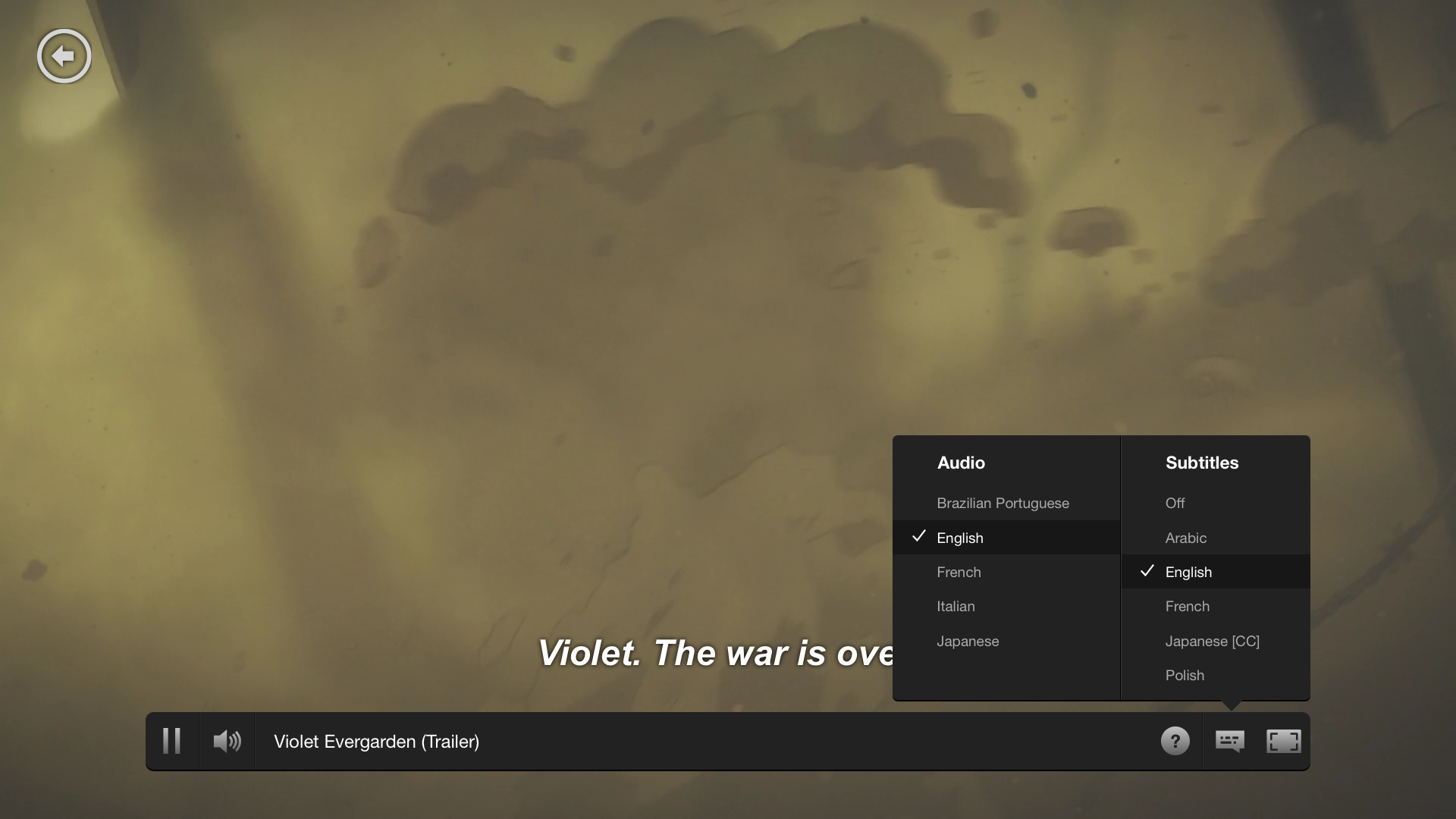 UPDATE (11th January): We can happily announce that Violet Evergarden is indeed now officially available as a simulcast! This will be the first Netflix Original (Streaming Exclusive) anime series to do so. The first episode is now available with multiple dub and subtitle languages. New episodes will be available every 8:00am GMT each Thursday. 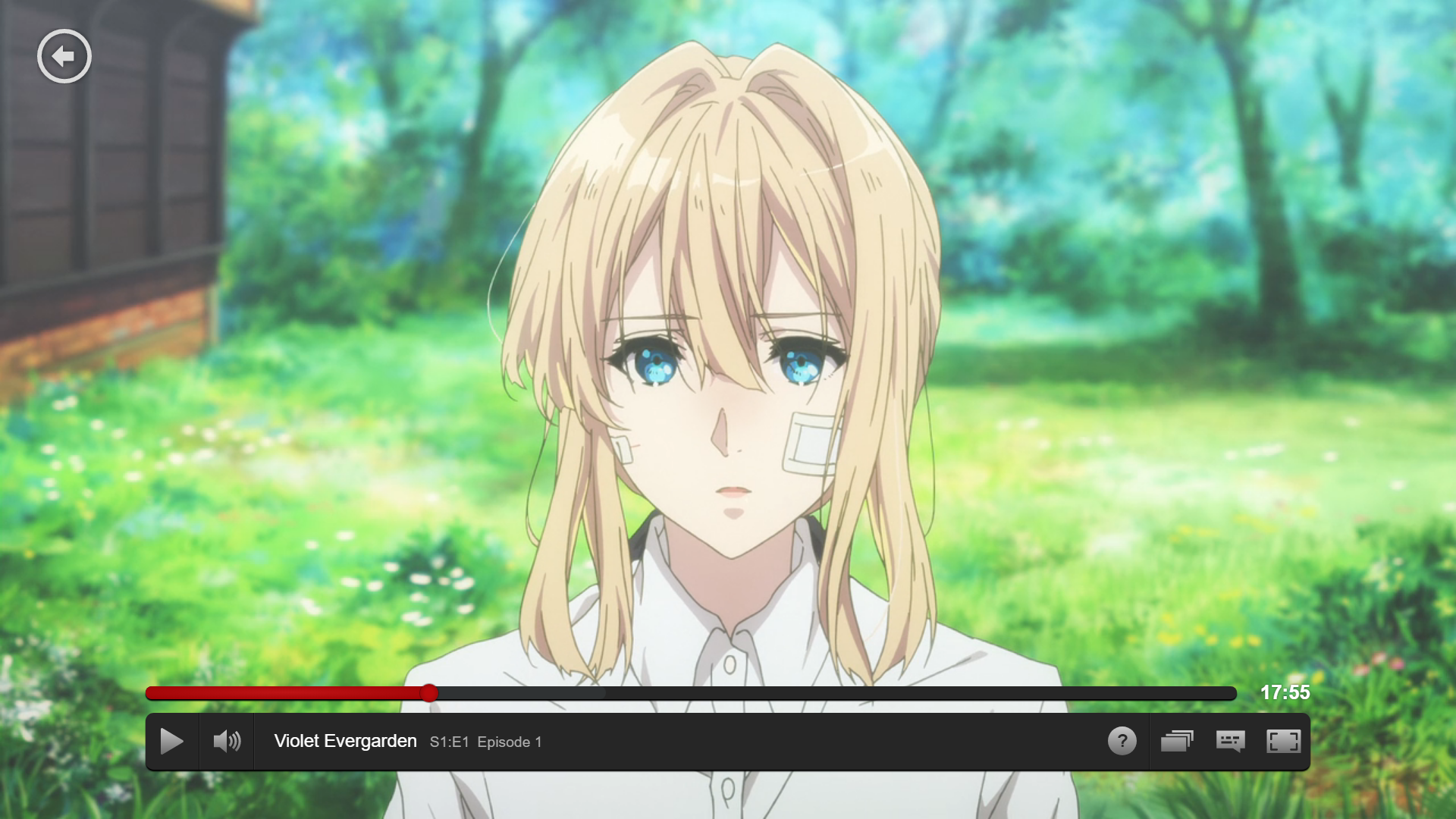 Violet Evergarden is animated by studio Kyoto Animation (Amagi Brilliant Park, Beyond the Boundary, Hyouka) based on the novel written by Kana Akatsuki. The show is directed by Taichi Ishidate (Beyond the Boundary franchise), with Series composition writer Reiko Yoshida (The Cat Returns, K-On!, A Silent Voice) and music composer Evan Call (Big Order, Dance with Devils, Symphogear GX). 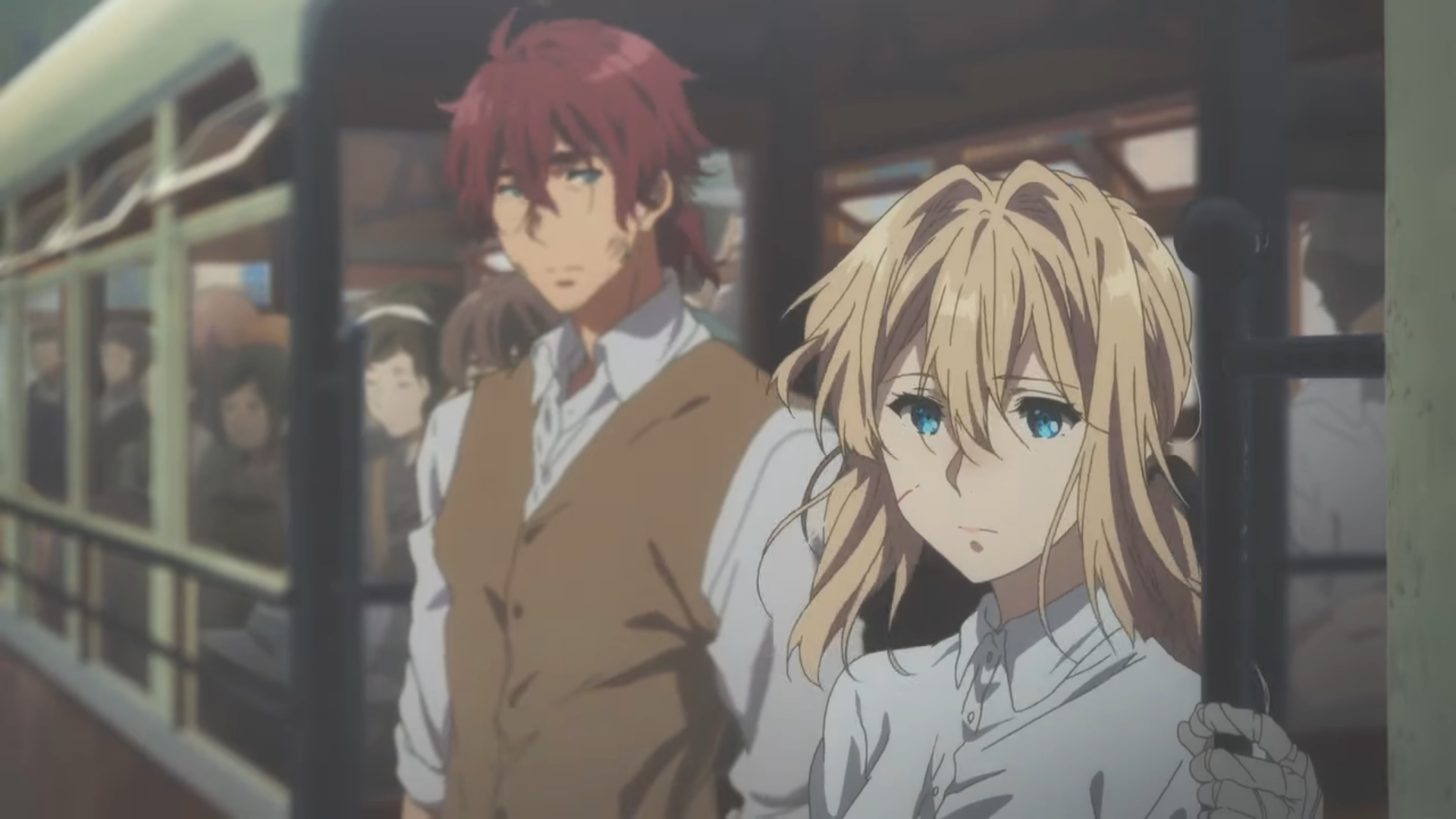 A certain point in time, in the continent of Telesis. The great war which divided the continent into North and South has ended after four years, and the people are welcoming a new generation. Violet Evergarden, a young girl formerly known as “the weapon”, has left the battlefield to start a new life at CH Postal Service. There, she is deeply moved by the work of “Auto Memories Dolls”, who carry people’s thoughts and convert them into words. Violet begins her journey as an Auto Memories Doll, and comes face to face with various people’s emotions and differing shapes of love.

There are words Violet heard on the battlefield, which she cannot forget. These words were given to her by someone she holds dear, more than anyone else. She does not yet know their meaning but she searches to find it. 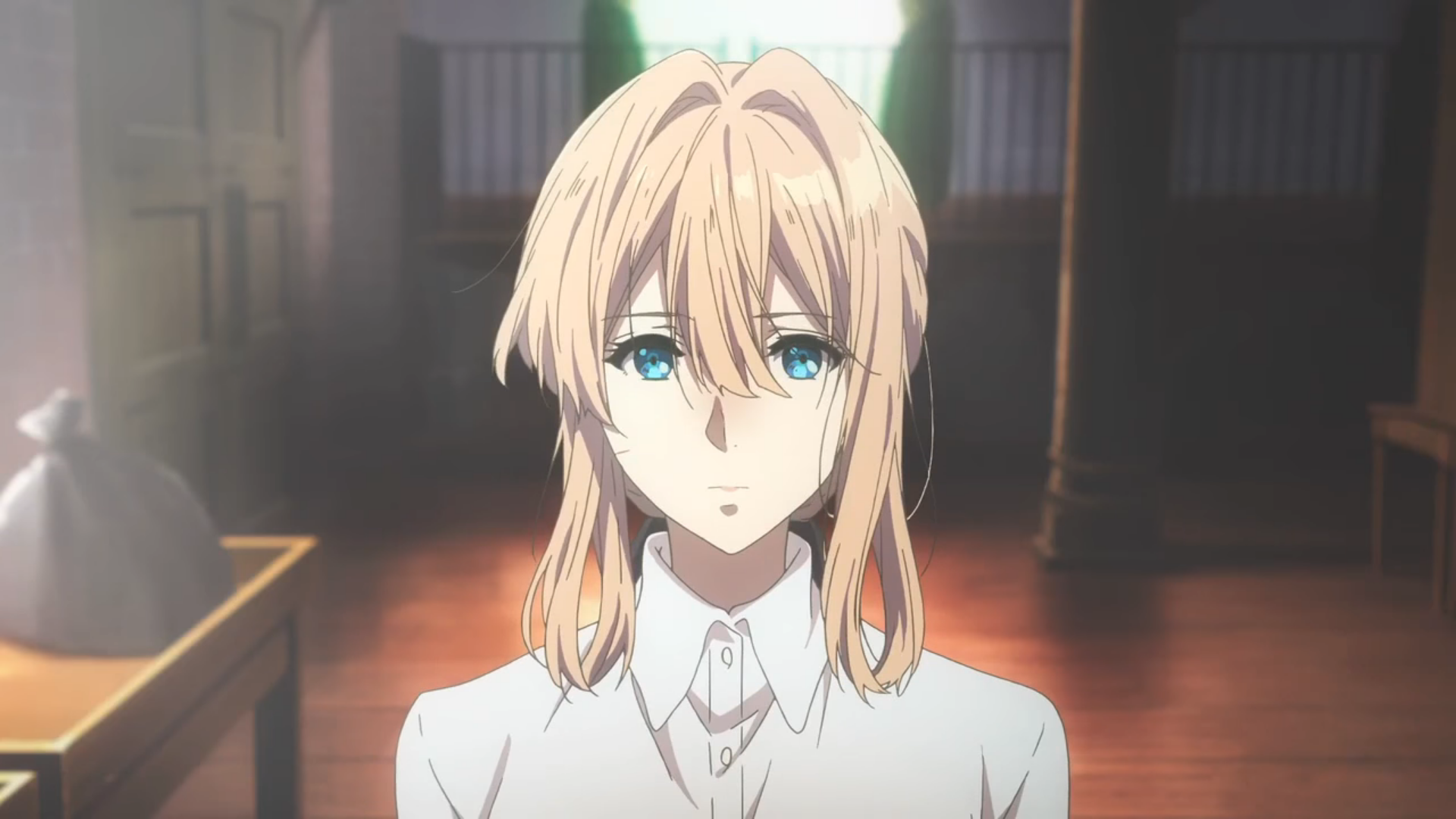 Violet Evergarden has been licensed for home video by Anime Limited in the United Kingdom & Ireland regions. 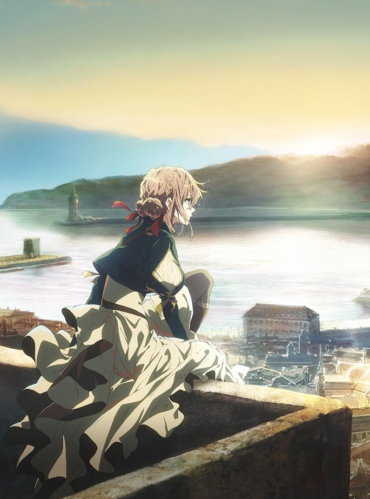 The 2019 feature-length spin-off film from Kyoto Animation is now available to stream on Netflix dubbed and subbed.