‘This is a twisted story… a story of twisted love.’

It’s all over the mass media: a woman’s head has been found in Ikebukuro! This dramatic revelation seems to act as the catalyst to an interrelated explosion of events, not least, Mikado Ryugamine’s Dollars versus Masaomi Kida’s Yellow Scarves versus Saika’s red-eyed Zombie Army. Except that now the yakuza are involved and it seems there’s more than one Saika. All the while, information broker Izaya watches events that he’s set in motion, rubbing his hands in glee. To Izaya, it’s all a game in which he enjoys playing god – but to the real people whose lives he’s been messing with, it’s become a matter of life and death. And at the heart of it all, Mikado looks as if he’s going to break under the pressure. What will happen if Celty and her head are reunited? Will she forget the life her body has been living in Ikebukuro and all the people whom she has come to know? And can anyone save Mikado – not just from the rival gangs, but from his worst enemy: himself? 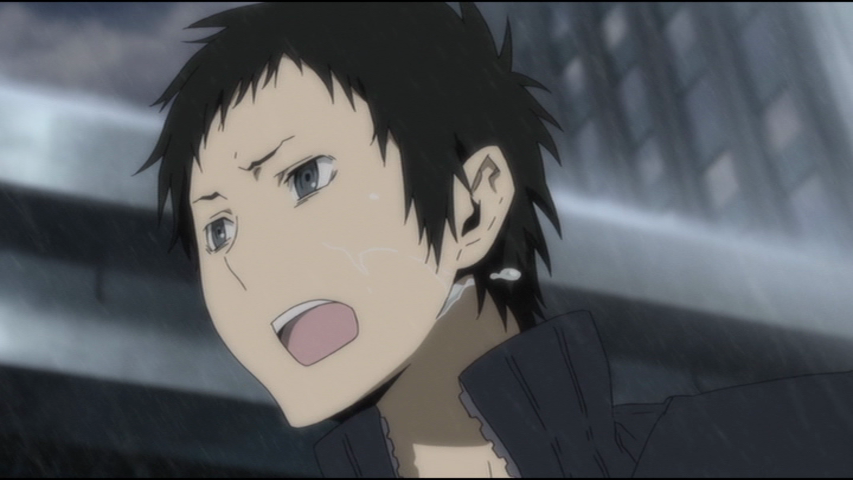 Durarara!! x 2 reaches its climax in these final twelve episodes and threatens to implode  under the sheer weight of extra characters and plot-lines. Which is a shame, because, at its best – and there are some excellent moments in Ketsu – it’s still one of the most imaginative and watchable urban legend anime to appear in the last years. From the urgently pounding beat of its new OP ‘Steppin’ Out’ by FLOW – and the desperate expression on Mikado’s face – we get the message that things have really got out of hand. The only way to watch this is to put aside any questions and just go with the flow, let yourself be carried along by the (mostly) inspired craziness. If there’s an underlying theme, it’s that of ‘who’s really a monster?’: those with supernatural powers, such as Celty or the Saika-bearers, or, indeed, preternaturally strong Shizuo – or those humans who seek to use and abuse them for their own nefarious ends. And Durarara!! x2 has corrupt and corrupted humans in plenty. The night shots of Ikebukuro are still the visual star of the show, glistening with coloured lights and rain-slicked pavements. And, eventually, all the plot fragments cohere in a nail-biting quadruple show-down: a siege at Russian Sushi with ‘Saika Zombies’ massing outside;  Shizuo versus Izaya; Celty versus Kasane Kujiragi and – worst of all – Mikado, visibly cracking under the strain, going to meet with his friend and rival Masaomi, armed with a handgun that he’s been given by Aoba’s thuggish older brother, Ran Izumii on behalf of…. 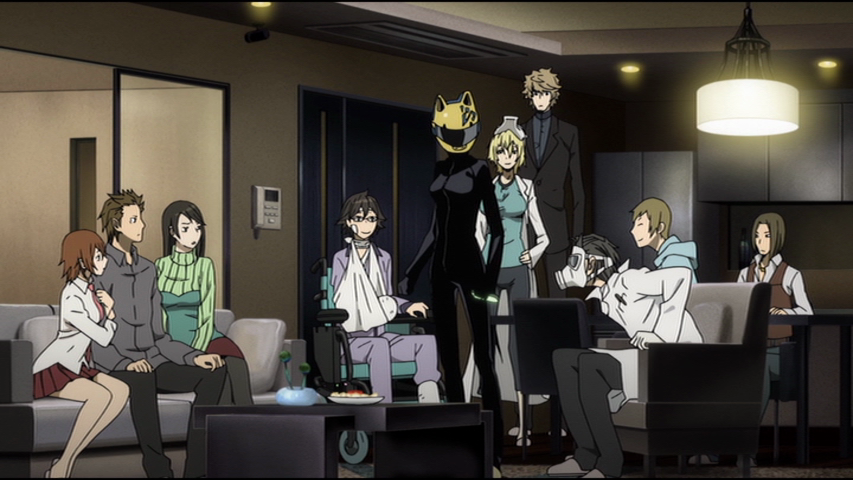 On the downside, some of the poor quality animation and off-model characters (evident and commented on when Ketsu was first streamed on TV) have not been put right. The series has produced some stunning visuals, as evidenced whenever Celty is provoked and her true Dullahan nature emerges, so this is, frankly, disappointing. And the pay-off from employing such a bewilderingly large cast of characters means that time devoted to developing the main protagonists is diluted. (Perhaps it’s an incentive to read all thirteen light novels and two sequel/spin-offs by original author Ryohga Narita!) Even the dramatic device of having each episode narrated by a different viewpoint character doesn’t really work very well. However, if you’re confused as to who’s who, this section on the US website might prove helpful. 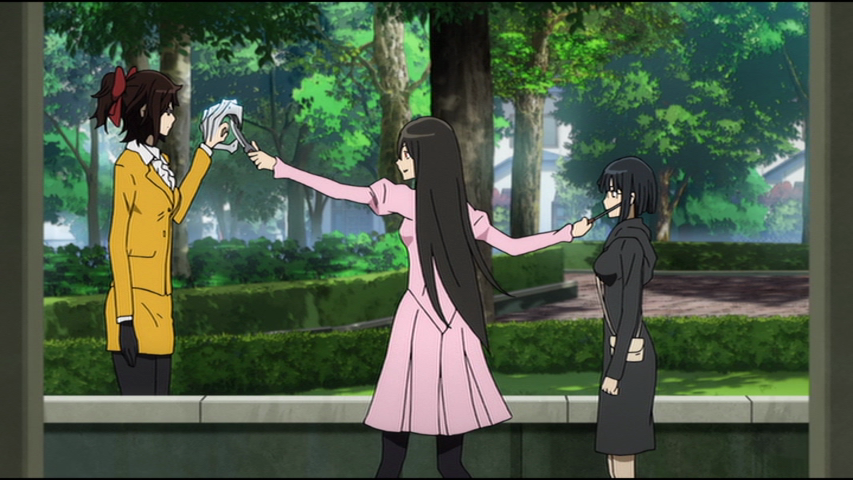 Music has always been a strong feature in Durarara!! and composer Makoto Yoshimori ( who has teamed up with director Takahiro Omori before on Baccano! and Natsume Yuujin-Cho) – while continuing to make use of the now-familiar tracks composed for the earlier episodes – introduces a few new ones. His imaginative (and amusing) choice of ‘different’ instrumentation  results in material such as an ironic string quartet variation on that old beginner’s stalwart ‘Chopsticks’ to accompany a significant conversation about monsters (and classmate Shizuo) between Izaya and Shinra in a meaningful flashback to their school days. New ED “Joker ni Yoroshiku” (Greetings to the Joker) by PENGUIN RESEARCH continues the tradition of scrolling through all the main characters who are dangling from the jagged tendrils of Celty’s black ‘smoke’.

Even though the Japanese cast are great, this show has a wonderful US dub cast and script and even smaller roles, such as Kine played by Liam O’Brien, contribute to the ensemble. Bridget Hoffman (as the increasingly crazy and brother-obsessed Namie) is so menacing that she steals every scene she’s in. And Wendee Lee captures perfectly Kasane Kujiragi’s ‘non’-human detached personality. As I mentioned in my reviews of Durarara x 2 Shou and Durarara x 2 Ten this is one of those series where the dub provides an excellent alternative to the original and actually makes some of the more obscure plot lines easier to understand. 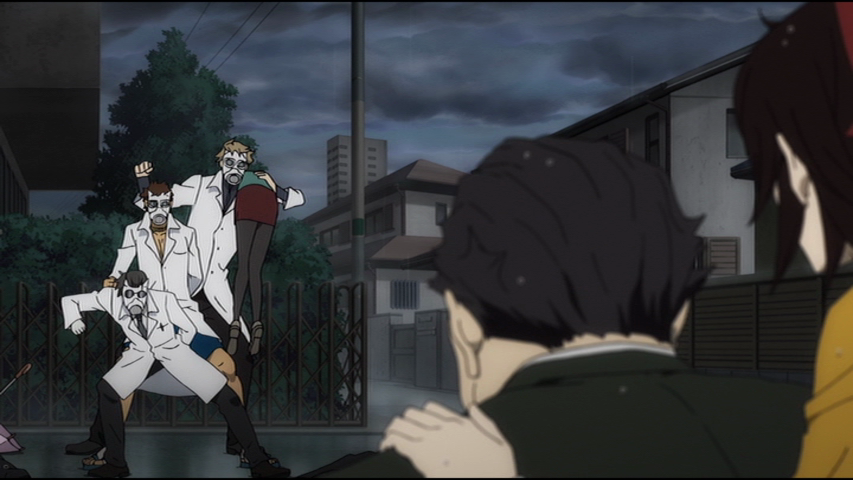 Anime Limited’s Collector’s Edition ‘comes packed in a rigid case that holds a digipack containing the two Blu-ray discs. Also inside the rigid case you’ll find a 20-page booklet that follows on from the ones included in Parts 1 & 2. It has character information as well as gallery. Plus, once again in keeping with the theme of the past volumes, you also get 6 art cards showcasing some of the unique art featuring a variety of characters.’ The only extras on-disc are the Textless OP and ED.

Ketsu’s most cherishable Shizuo moment (among many) is his encounter with Celty’s ghostly steed ‘Shooter’ and the way that the two join forces to ride to her aid. 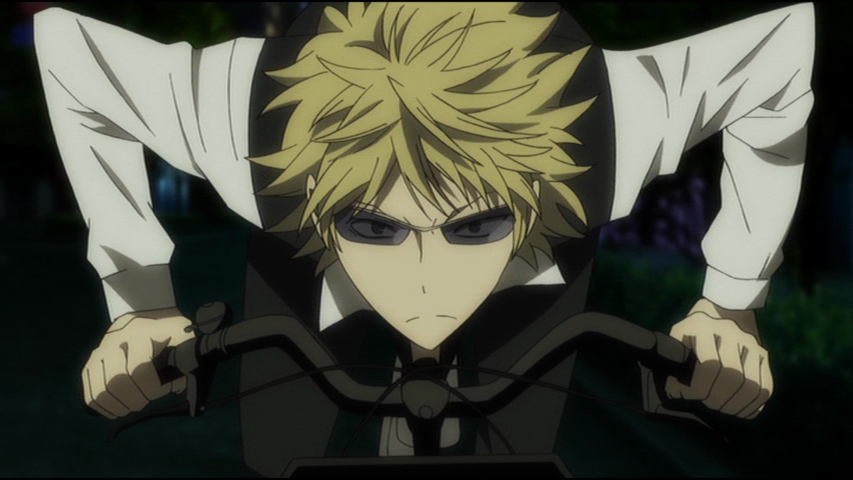 Let’s face it; if you like Durarara!!  you’re going to want to see the series through to the end. I certainly did and there’s much to keep you on the edge of your seat here. At its best, the combination of urban mythology, quirky humour and nail-biting drama has a unique flavour all of its own that still appeals.

**Fun Fact: If you’re currently enjoying Hakata Tonkatsu Ramens, there’s a crossover light novel with Durarara!! by  Chiaki Kisaki – not yet translated but we can hope… ** 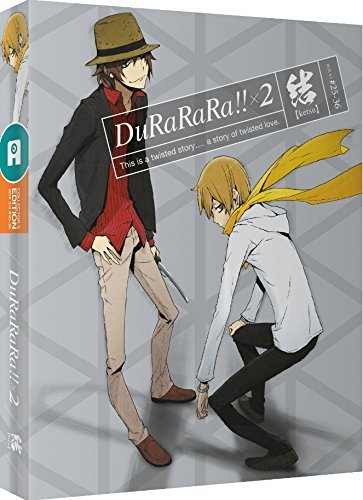