Netflix have announced their May 2018 release slate with a bunch of titles joining the UK service. As per usual we look out for any anime and also live-action Japanese properties that crop up here and there. The titles below are currently scheduled for May, though please be aware that they are subject to change at any moment.

The criminal mind is a twisted place, and Jimmy Kudo knows the shady corridors of humanity better than any detective in the game. There ain’t a bad guy in town who can outsmart him, so they try to put the super sleuth down for a dirt nap. But instead of ending up in a shallow grave, Jimmy wakes up to find himself turned back into a kid. Utilizing his unlikely new persona and the latest in crime-fighting gadgetry, he tracks down his assailants as boy detective Conan Edogawa.

Hyakkaou Private Academy. An institution for the privileged with a very peculiar curriculum. You see, when you’re the sons and daughters of the wealthiest of the wealthy, it’s not athletic prowess or book smarts that keep you ahead. It’s reading your opponent, the art of the deal. What better way to hone those skills than with a rigorous curriculum of gambling? At Hyakkaou Private Academy, the winners live like kings, and the losers are put through the wringer. But when Yumeko Jabami enrolls, she’s gonna teach these kids what a high roller really looks like!

Lupin the Third: The Castle of Cagliostro

In the twilight of his career, master thief Lupin the Third’s latest and greatest caper has hit a snag. What should’ve been bags of cash from a national casino turns out to be expert counterfeits! Together with his partner-in-crime Jigen, Lupin heads to the remote European nation of Cagliostro to exact revenge.

Not everything goes as planned; the two encounter Clarisse, a royal damsel in distress being forced to marry the sinister Count Cagliostro against her will. Saving her won’t be easy, however, as Lupin and Jigen – together with Lupin’s unpredictable ex-girlfriend Fujiko and the swordsman Goemon – must fight their way through a trap-filled castle, a deadly dungeon, and an army of professional assassins! Can Lupin rescue the girl, evade the cuffs of his long-time nemesis Inspector Zenigata, and uncover the secret treasures of The Castle of Cagliostro?

Mob is an 8th grader with powerful psychic abilities who wants to be normal. When not exorcising evil spirits he attempts to suppress his powers, causing stunted emotions. But when he hits 100 percent, his pent-up feelings unleash a dark power.

A group of young people – including a chef, a snowboarder and an ice hockey player – gather at the Karuizawa woods while pursuing their dreams.

In the meantime you can check out the rest of the upcoming Netflix Originals slate of anime here on the site. The Spring 2018 anime titles currently exclusive to Netflix are Aggretsuko, Dragon Pilot: Hisone and Masotan, Last Hope (Jūshinki Pandora), Lost Song, and The Piano Forest (Piano no Mori). 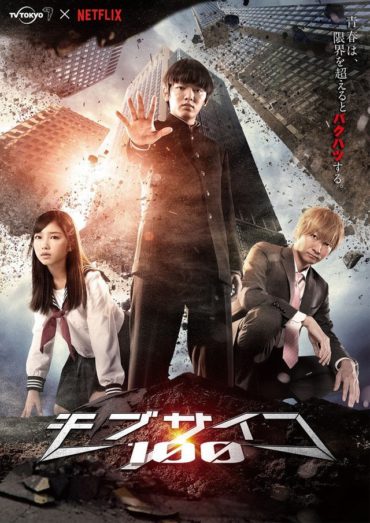 Lupin the Third: The Castle of Cagliostro and Saint Seiya: The Lost Canvas Now Streaming on Netflix UK

The 2009 anime series from TMS is now available with an English dub over on Netflix.