Hakuno Kishinami is seemingly an ordinary boy who attends school, but his world is actually an artificial environment within a space called the ‘Moon Cell’ run by the SE.RA.PH that chooses humans to become masters and participate in the Holy Grail War. As his world starts to collapse around him and his only known friend Shinji Matou betrays him, Hakuno accidently summons his own Servant, a Saber class that saves his life and has her own wish to participate in the War. However, as the pair begin the climb up to the multiple levels and battle the Masters they find on each one, they realize that something much darker is going on behind it all.

Fate/Extra Last Encore is Netflix’s second Fate-related co-produced anime in as many years, and like its other series, Fate/Apocrypha, it’s actually an alternative universe re-telling of the original Fate/Stay Night story. However, unlike Apocrypha, Extra Last Encore is not as welcoming to newcomers; the former has a completely original cast with no references to previous magi families and explained its War rules clearly, the latter instead brings back older characters in different roles and half-expects the audience to already know the rules to the standard Holy Grail War. So, if you’re a complete newbie to Fate, I highly recommend you stop here, go read my Beginner’s Guide to Fate article to find out where to start, and then come back. 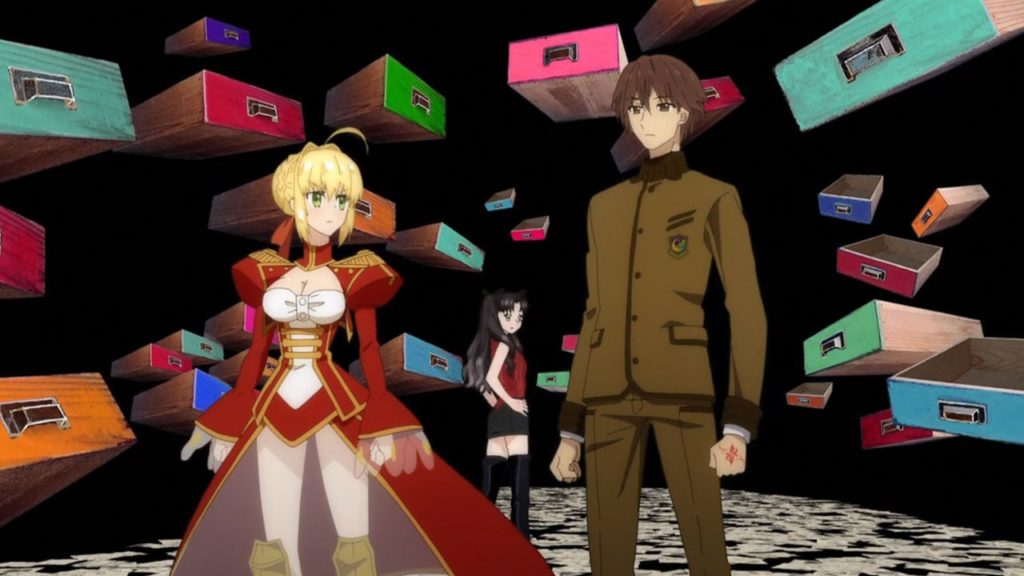 The anime itself, although part of the mega franchise, is based upon the dungeon-crawler PSP game Fate/EXTRA, which normally raises red flags as most anime based upon video games often fall into the trap of making many boring scenes of exposition dumps and failing to shake the feeling that you should be playing the video game instead. To give credit where it’s due; the anime does try to provide a natural flow to the story and have the plot unfold slowly but organically as the series goes on. The characters’  backstories are revealed sparingly but in a compelling manner, and although it stops for some talk-heavy scenes, they do try to keep them brief and sometimes visually interesting to avoid them being tedious. However, the video-game vibes are not completely shaken off.

The plot is easily summarised as this; characters go to a level, find the floor master (a.k.a. the boss), defeat the master, and advance to the next level where the process repeats. Although the bosses are meant to represent the Masters and various Servant classes on every floor, it doesn’t feel like a Holy Grail War because the stakes and rules are not the same, it just feels sort of like Sword Art Online where the characters used their wits and codes to make them more advanced and defeat their opponent in combat. It doesn’t help that the various Masters and Servants are, ultimately, forgettable despite the series’ effort to have them spill their backstory and motivations before being killed. They do not have any impact on the character’s arcs or the plot outside of their deaths, so the audience can’t relate to them or feel sorry for them. The only exception is the opponent in Episodes 6 and 7; the servant has a unique design and concept, gives our male lead Hakuno a serious character-turning point when it badly needs it, and their back story is one of the most tragic of the series (which is saying something for Fate!)

Although we lack the rich variety of Masters and Servants as in previous Fate anime, Fate/Extra Last Encore does have a decent pair of main heroes to carry the story. First let’s look at Saber (who is not the one we know and love from Fate/Stay Night despite the similar face and costume design); she doesn’t give the best first impression as the camera often enjoys lingering on her very defined curves when she talks and her battle outfit is just ridiculous (it comes with a boob AND butt crack window!) However, her personality reminded me very much of Rider from Fate/Zero; she’s confident, hammy, egotistical, has a lust for life, enjoys the thrill of battle and is a positively portrayed bisexual. Her outlandish speech patterns and positive nature really grows on you, and it provides a lively counterpart to our deadpan male lead. Hakuno, likewise, also doesn’t immediately strike you as a good lead as his opening lines are all about how much he’s full of hate with a growling, brooding voice that could rival Shadow the Hedgehog. But there’s a layer of darkness that hints at something deeper going on that is far different from previous male protagonists that we’ve had in Fate. Whilst his voice and mood are mostly dour, within the last few episodes he starts to grow more as a character so I hope in future instalments we get to see the continuation of that.

Animation is provided by SHAFT, and this is their first contribution to a Fate-related series. Although they are known for providing their skills to a variety of visually impressive works such as the 2017 movie Fireworks and TV series Dance in a Vampire Bund, their work on Extra Last Encore delivers a mixed result. There’s no denying that the backgrounds are gorgeous; each world or ‘level’ of the anime looks and feels like their own separate entity from the Japanese-festival capital to a Wonderland-meets-Witch Maze from Puella Magi Madoka Magica (which SHAFT also animated so it would not surprise me if they re-used assets from that series). There’s also plenty of scenes where the framing is breath-taking with fabulous use of colour; for example the first time Saber comes to life in Episode 1 is one hell of an introduction to the Servant, and the ending animation uses lots of particle and sparkle effects to a beautiful degree that makes it hard to skip. However, there are two major drawbacks. One is the battles themselves, they’re very short and poorly choreographed, often over with a single sword strike and never strive to add any creative flair or generate drama. As a Fate series this is highly disappointing, considering the battles from the same franchise that have come before. The other main weakness is the design of their female characters; outside of their usual fanservice (which there’s plenty of, distractingly so some of the time) you’ll notice that the females also have incredibly wide and bright eyes, shimmering hair and skin, smaller and rounder faces, and exaggerated mannerisms. I understand the point behind it, as female characters are mostly designed to appeal to a (presumably) straight male audience who would want to find them cute and/or sexy, however the completely overblown design  contrasts sharply with the much neater and straight-lined designs of the male characters, to the point that all the girls look like they belong in a completely different anime altogether. This is even more obvious with Fate-veteran characters such as Rin who looks totally different to her original design, and our Saber that is supposed to be this commanding and majestic fighter yet looks as if she just stepped out of Pretty Cure. The female designs are easily the worst part of the series and are far too distracting. 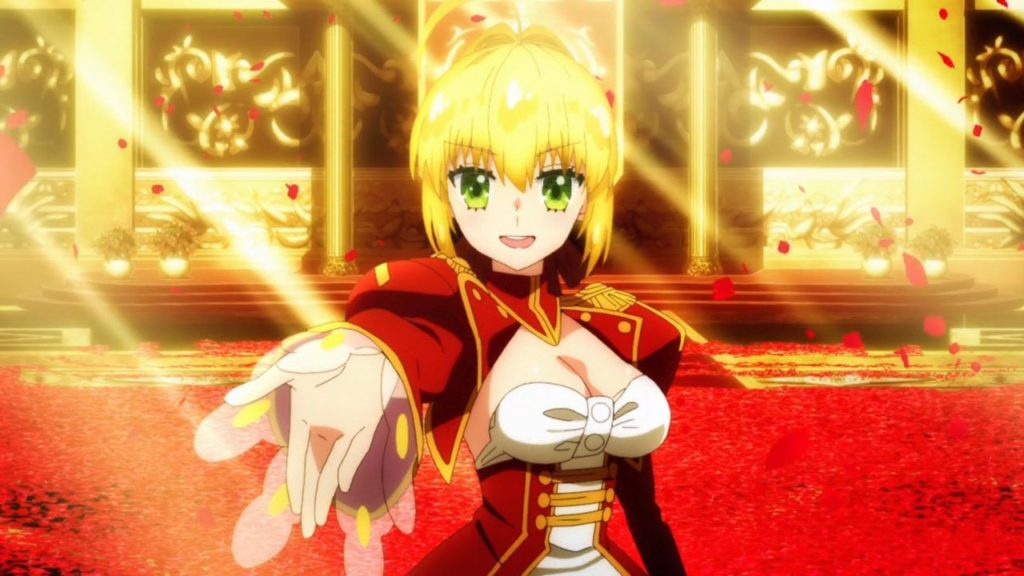 Fate/Extra Last Encore is an unusual addition to the franchise so far; out of the main anime instalments this one feels the least like a Fate anime with lack of competent battles, Master and Servant relationship exploration or even a standard Holy Grail War. But the characters are still compelling, the setting is interesting, and the animation, whilst making some very odd decisions when it comes to the females, does have its shining moments. It’s worth the time to stream if you’re a Fate fan and keep your expectations low. 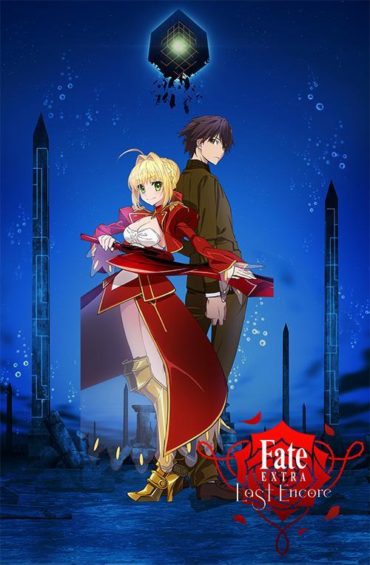